Race for a Better Fuel Begins with NREL Researchers

Watching cars zoom around and around an oval track isn't Jesse Hensley's idea of a good time. Making them run on biofuel would be.

On the Colorado campus of the Energy Department's National Renewable Energy Laboratory (NREL), where the posted speed limit is 20 mph, Hensley and his team have been racing toward a future where high-octane biofuel could push automobile performance further.

"I'm an engineer, so I really appreciate high-performance machines and how amazing they are," said Hensley, who earned his doctorate in chemical engineering from the Colorado School of Mines in 2007 and joined NREL two years later. "I'm also an environmentalist and all about burning as little fuel as possible. You might say that this is at odds with auto racing, but the marriage of high-performance engines with 'green' fuel would move us toward a sustainable future while still having lots of fun."

Hensley's ongoing research could make racing fans take notice. He and his colleagues in the laboratory's Thermochemical Catalysis Research and Development group have created a catalyst that converts biomass into a hydrocarbon mixture rich in 2,2,3-trimethylbutane, also known as triptane. Triptane is added to gasoline to reduce engine knocking, to boost the octane rating, and to increase the motor's efficiency. The biofuel NREL developed is 85% triptane.

"When we purify the crude product we just boil off some of the lower octane components, predominantly light hydrocarbons," Hensley said. "Once we get up to a concentration of about 85% triptane, we don't see much benefit in increasing the purity. Octane rating doesn't increase much above 85% triptane, and it also happens to be an easy stopping point in the distillation. Going above about 88% purity requires a lot more energy."

The anti-knock number, often called the octane rating of gasoline, varies from 85-87 for regular grades to 91-94 for premium grades in the United States. The 85% triptane mixture produced at NREL registers an estimated octane rating of 107. NREL's fuel is better suited for race cars because current standard engines aren't designed to take advantage of such high octane.

Greater Efficiency Could Boost Use of Biofuels

The triptane could also be added to gasoline. U.S. drivers already motor around using a blended fuel, a mixture of ethanol and gasoline. The mix tends to contain about 10% ethanol. The flex-fuel known as E85 bumps that blend up to as much as 83% ethanol. Although the presence of ethanol reduces a car's miles per gallon, its use boosts the octane rating and thereby increases the efficiency of the engine.

A 50-50 mix of base blendstock gasoline and the biomass-derived triptane, however, results in an octane rating of 90, Hensley said, without reducing the energy content of the fuel. "It's actually nice that there's a wide range of potential blend ratios because you only make so much biofuel," Hensley said.

The International Energy Agency estimates that biofuels will account for 27% of fuels used for transportation worldwide by 2050.

"We can't fully replace petroleum if we continue to drive gasoline- and diesel-fueled vehicles," Hensley said. But making vehicles more efficient through the use of NREL's triptane mixture could push the percentage of biofuels used even higher. Hensley and his team have been researching the chemistry of triptane since 2011, but within the past couple of years they've developed what they think is a market-ready formulation for the catalyst that makes the fuel.

The research attracted funding through NREL's Laboratory Directed Research and Development program, which promotes innovative work. Hensley and his team – Connor Nash, Earl Christensen, Eric C.D. Tan, Daniel Ruddy, Joshua Schaidle, and Michael Talmadge – spent most of this year exploring their idea. By September, when their time as part of the program expired, they were confident in the technology and optimistic about the market potential of the fuel. 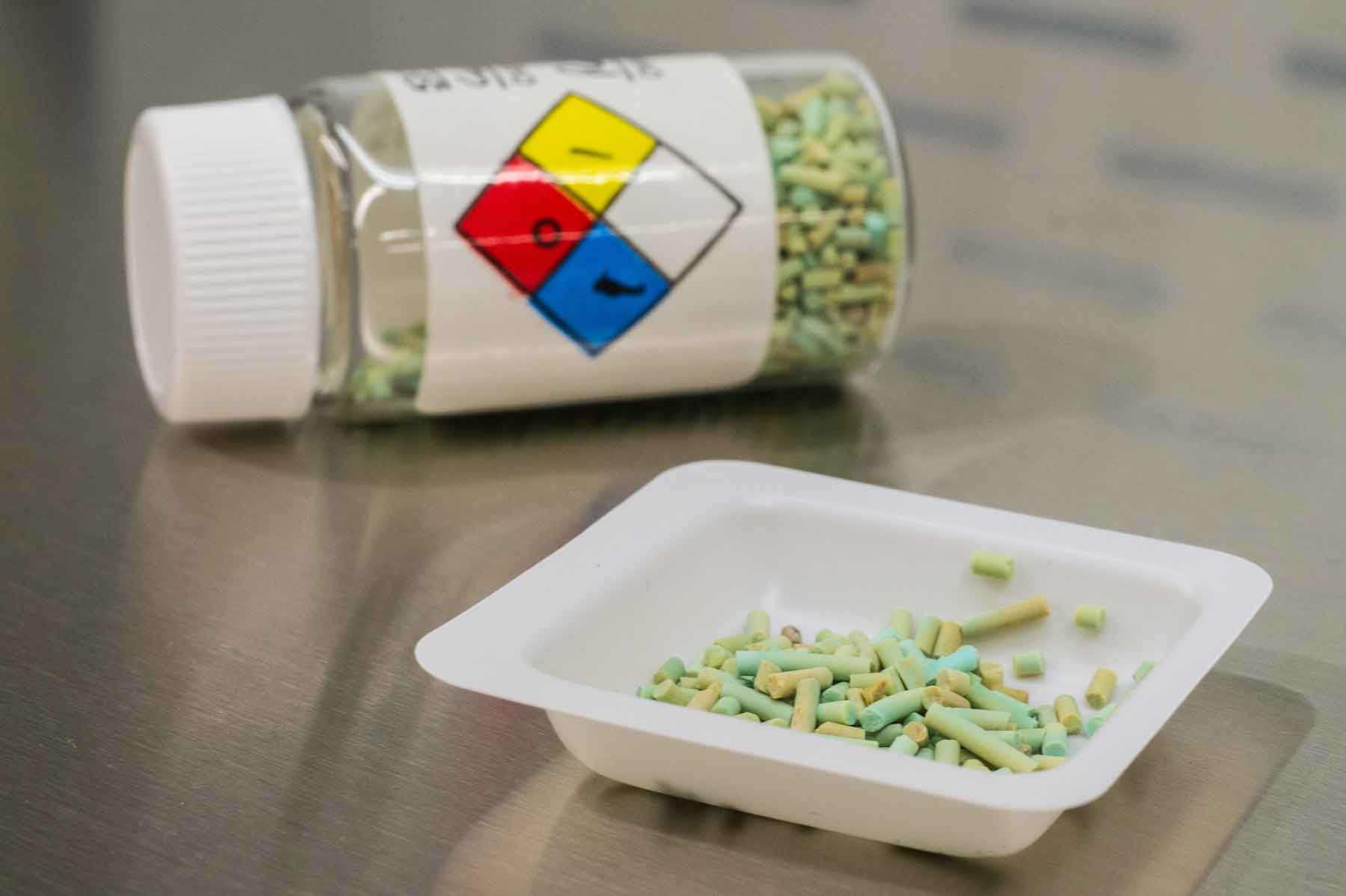 Any Carbon Source Will Do

Making 85% triptane requires a series of reactions. Researchers gasify biomass to a mixture of carbon monoxide and hydrogen, convert that gas to methanol and dimethyl ether, and then convert dimethyl ether to a hydrocarbon mixture rich in triptane.

"The process is carbon-agnostic," Hensley said. "One can start with any carbon source. Being NREL, biomass is obviously our target. But you could also use construction waste, municipal waste, biogas, natural gas, petroleum, or coal."

The NREL catalyst outperforms one already available on the market, yielding as much as 10% more miles per gallon.

Moving new technology into the marketplace is supported by the Energy Department, which chose a subset of Hensley's team to be part of a pilot commercialization program called Lab-Corps. The researchers will receive $75,000 to develop a plan to move the technology to market, to learn how to meet the needs of potential customers, and to avoid the pitfalls encountered by predecessor biofuel startups. Separately, the department chose to scale the process by making a $740,000 investment through its Technology Commercialization Fund.

The marketplace is already waiting. "We had contact from a company in Germany that wanted us to make them 20,000 liters of triptane," Hensley said. "We had to put them in contact with potential technology licensors, since we're a research, not a production facility."

By itself, NREL can produce some triptane but not enough to pursue certification for fuel use through ASTM International. The organization develops specifications that must be met before selling a product as a fuel. "Unfortunately, some of the ASTM tests require a lot of fuel," Hensley said. "For instance, you may have to run it in an engine for a day, requiring gallons. We make teaspoons per day in the lab."

Christensen, a chemist in NREL's Fuels Performance group, said the tests ASTM requires for gasoline fuels include the volatility range and other physical properties.

Combustion quality and energy density are of high interest in fuel combustion research. "We must also consider things like toxicology. For instance, if a substance is going to be released out to the public, it can't be carcinogenic or otherwise more harmful than gasoline." As an additive to gasoline, the triptane mixture stands out when compared to other anti-knock compounds such as tetraethyl lead, benzene, or toluene. Tetraethyl lead was historically used to boost octane, but was phased out due to public health concerns and impacts on vehicle emission control catalysts. Benzene and toluene belong to a class of compounds called aromatic hydrocarbons, which have high anti-knock properties but may pose risks to human health and the environment.

With such small quantities available for testing, much of the work relies on process simulation and reaction engineering rules of thumb.

As part of the Technology Commercialization Fund grant, Enerkem, a Canadian producer of chemicals and clean transportation fuels, will produce larger quantities of the 85% triptane for NREL, starting from municipal solid waste. "With Enerkem, we're hoping to make at least one 55-gallon drum per week of crude liquid," Hensley said. "Of the crude liquid, about 60%-70% is going to become 85% triptane product. We're talking gallons, not tankers, of this stuff. That will give us enough material to start doing more of the advanced testing that's required to get the fuel approved for use."

"Once we have the larger volume, we can do much more detailed analysis as far as fuel properties, how this stuff compares to ASTM specifications for gasoline, as well as hopefully doing some actual engine testing on it," Christensen said.

The team is aiming to start engine testing in 2017. 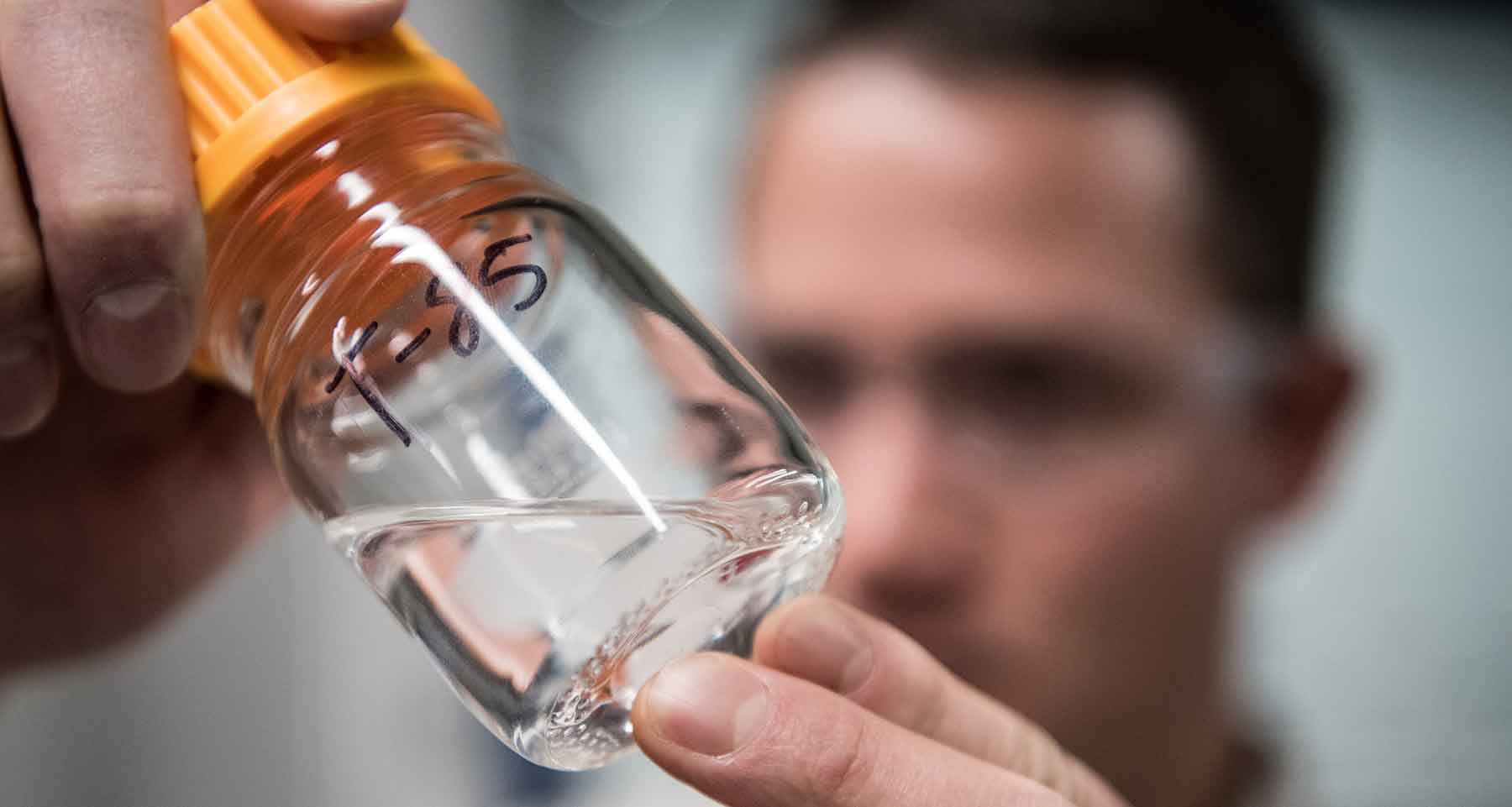 Look! Up in the Sky!

In addition to race cars, the 85% triptane could find a use in turboprop airplanes. Those planes use high-compression engines and burn premium fuel, usually with an octane rating above 100. To meet this octane requirement, aviation fuel contains tetraethyl lead. Both the Federal Aviation Administration (FAA) and the Environmental Protection Agency are pushing for a lead-free alternative. The FAA wants a replacement fuel available in 2018.

"We've had discussions with some of the key players in the aviation industry," Talmadge said. "If we can develop a product that meets the modeled or predicted quality, then I think there would be substantial demand and interest in that material."

According to the FAA, approximately 167,000 private planes burned about 175 million gallons of leaded aviation gasoline in the United States last year. "I think it's really cool that we have a technology that might stop lead from spewing out into the atmosphere," Hensley said. "It's a bonus that this fuel could come from sustainable sources like biomass."

Commercial airplanes use a different type of fuel, which is a grade of kerosene called jet. Such planes require significantly more fuel: 10.7 billion gallons last year, according to the federal Bureau of Transportation Statistics. Hensley said NREL's process "also produces a product that can be further reacted to form a hydrocarbon mixture with properties resembling jet. We're not as far along that path yet, but see tremendous market potential."