This September, scientists and engineers from as far away as South Korea and as close as Boulder drove up South Table Mesa, on a dusty road President Jimmy Carter traveled decades ago, to the Solar Radiation Research Laboratory (SRRL) at the Energy Department's National Renewable Energy Laboratory (NREL) in Golden, Colorado. Once at the SRRL, the researchers unpacked their telescope-like instruments, designed for measuring direct beam solar irradiance, and pointed them at the sun.

"There are only two places on the planet that have this capability: NREL and the World Radiation Center in Davos, Switzerland," said Tom Stoffel, who helped lay the foundation for this work when he started as a young associate scientist at the Solar Energy Research Institute (now NREL) in 1978. "This is something so unique," he said, as he looked out at the nearly 40 participants from six foreign countries and the United States. Many wore floppy hats and hunched under golf umbrellas as they recorded data for the 19th NREL Pyrheliometer Comparisons (NPC) on September 26–30.

Although he retired from NREL in 2013 and now works at a solar energy company, Stoffel returns each year the event is held to bask in the global scientific camaraderie. "It brings together all the scientists, young and old, with the common interest of making sure that the solar industry and science in general can measure to the highest precision possible."

Part science, part business, and part reunion, this year's NCP functioned to ensure that the devices used for measuring solar irradiance are calibrated properly—with standards traceable to the World Radiometric Reference (WRR). WRR was introduced to ensure worldwide homogeneity of solar radiation measurements, determined from the weighted mean of the measurements of a group of six absolute cavity radiometers. The standard has been in use since 1980, and is recalibrated every five years at a larger assembly in Davos.

In the years between international gatherings—such as this year—NREL hosts the NPC event to allow other groups the opportunity to harmonize their radiometers with the international reference.

Unlike some measurements such as temperature, for which there are absolutes worldwide, figuring out a solar energy budget—that is, the radiation coming in, and radiation coming out—requires an instrument. In the current radiometer, sunlight enters the instrument cavity through an aperture and is directed onto a thermopile, an electronic device that converts heat to an electrical signal that can be recorded. Such instruments require regular monitoring and upkeep.

NREL organizers such as Principal Scientist and Metrology Group Manager Ibrahim Reda, who heads up the NPC data collection and processing, appreciate the legacy of the NPC, as well as Stoffel's ongoing presence. "We're still keeping in his footsteps. He's the one who mentored everyone here," Reda said.

Yet what began as a scientific endeavor supported by the Energy Department and boosted by its Atmospheric Radiation Measurement (ARM) Program has grown to be a vital necessity for the burgeoning global solar energy industry. That's reflected in the 2016 NPC turnout, which Reda noted to be "our largest yet."

Need for Standards in a Billion-Dollar Industry

Many participants are familiar faces. Each year of the NPC since 1998, Wim Zaaiman has traveled to NREL from the European Commission's Directorate General Joint Research Centre in Northern Italy. Zaaiman was blunt about the necessity of the annual calibration events.

"We are working in the field of photovoltaics [PV]," he said. "For us, PV means money." He said that in 2015, PV production worldwide totaled $33 billion.

The need for good data is foremost. "We are talking about uncertainties here, and we want to lower the uncertainties," Zaaiman said. A swing of just a half percentage point in the actual output of solar energy plants—compared to projected outputs—would represent about $165 million annually. "It's about risk and bankability. A company could go bankrupt or make a huge profit." To reduce the uncertainty of projects, he said, it is necessary to have all laboratories and manufacturers use the same measurement standard. "That way, people know exactly that the data they get are harmonized all around the world."

Sending him to NREL is a tiny price to pay for all the benefits, Zaaiman said. "The European Commission is committed to keeping the quality of the data right. You can produce data, but if the quality is bad, it makes no sense at all." 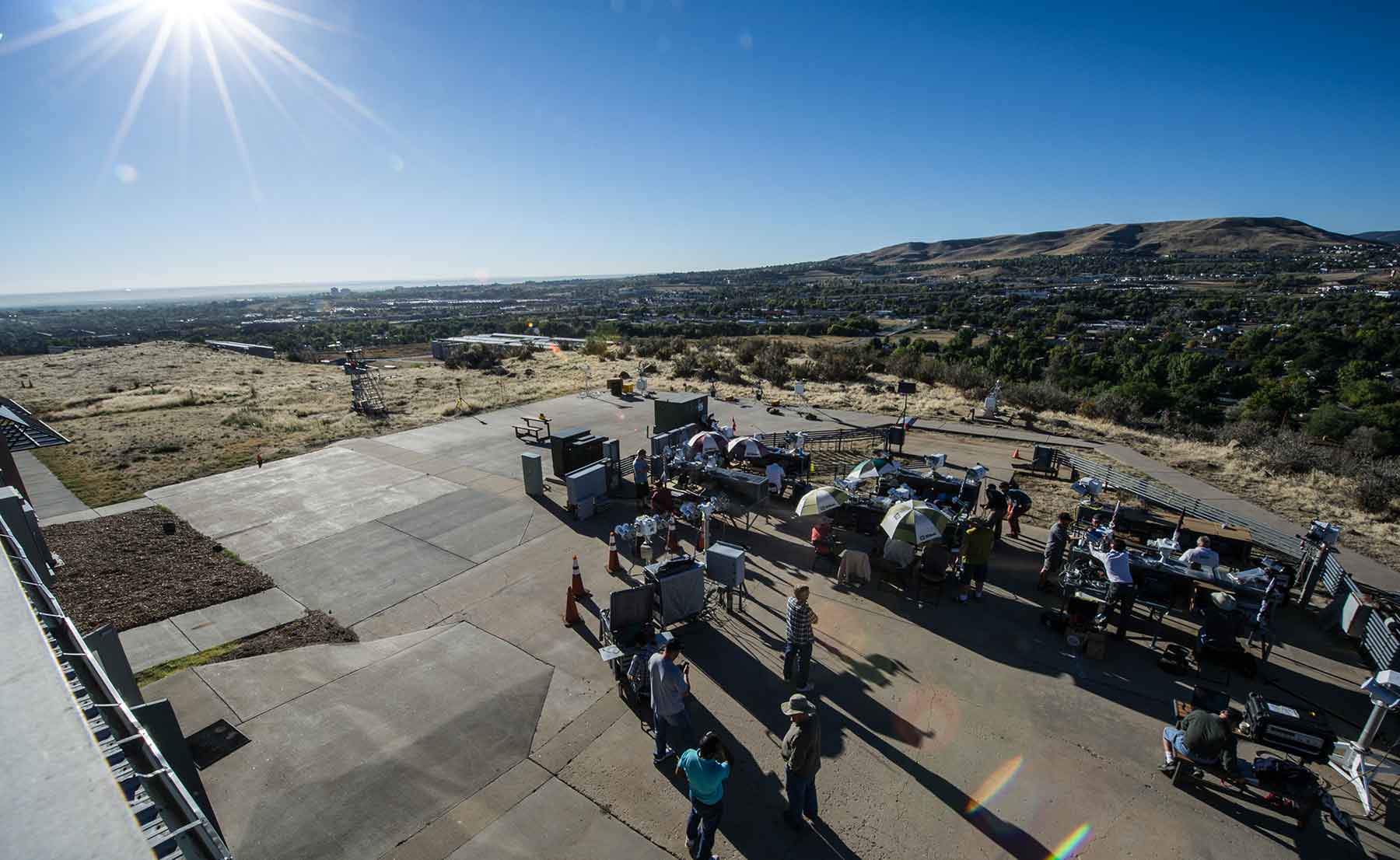 Researchers from around the United States and the world gathered on South Table Mesa during the last week in September to calibrate instruments to measure solar irradiance at this year's NREL Pyrheliometer Comparisons. Photo by Dennis Schroeder, NREL

Climate Science on a Mesa Top

While the PV industry has grown since the era of the late 1960s, when space exploration sparked renewed interest in finding ways to measure solar irradiance, so too has climate science taken on urgency.

Climate change requires better and better measurements to support model validation. At the SRRL, NREL's Sensing, Measurement, and Forecasting Group works side-by-side with the lab's Metrology group, collaborating on the NPC events and other activities such as ARM mentoring. Measurements are key. As the famed scientist Lord Kelvin espoused long ago, the ability to measure is to know. Today, scientists believe that once they know about the sun and its energy output, they can more confidently deal with climate change and improve climatology computer modeling.

Another NPC regular, Christian Thomann, representing the World Radiation Center in Davos, said he understands that premise. He was part of last fall's International Pyrheliometer Comparison (IPC-XII) held in a Swiss alpine valley 5,200 feet above sea level. It was his third IPC, which has grown to more than 110 participants from 33 countries. Reda was there with NREL's four reference radiometers.

"It's very important to gather there every five years," Thomann said. "People are trying to maintain stability [of standards]." Ideally, the radiometers should be tuned so that they produce the same results at NREL or in Davos. At times, tests uncover flaws. Not only do participants get to troubleshoot—because from time to time a machine can produce flawed data sets—but manufacturers can also test new models and hear new ideas. Joop Mes of instrument-maker Kipp & Zonen journeyed from the Netherlands with several pieces of solar measurement equipment, including a new model from his firm.

"It's a great opportunity with the clear sky [in Colorado] to test the conditions. In Delft [Netherlands], the weather is not all that sunny," Mes laughed. On his first day at NREL this year, he discovered a bug in one new machine. Developed in Europe, the pyrheliometer reported data in Greenwich Mean Time—not the time in Colorado. Mes said the instrument would be adjusted, adding: "It's field testing."

Renewable energy technology is in part a response to the impact of climate change. "If you are talking climate change, you're going to have a standard and compare things all over the world," said Engineer Jim Wendell of the National Oceanic and Atmospheric Administration (NOAA) Global Monitoring Division. "If more energy comes in, and less goes out, you're going to warm up. That energy balance drives a lot of things."

As he and others at the NPC explained, increasing temperatures can change cloud formation, the reflectivity of the clouds, or water absorption, along with myriad other factors that impact the Earth. And while all elements are important, Wendell said: "I tend to think that the sun is one of the most important ones."

There are clear climate science implications for the assembly. The fact that representatives from NOAA in Boulder attended this year's NPC bears testimony to the importance underlying the session.

Aside from the convenience of their visit because Boulder is so close to Golden, there was a sense of purpose based on experience. Wendell was sporting a wide-brimmed leather hat, because he knows from personal experience the power of the sun. His father, a Texas farmer, used to favor a baseball cap while working. "Then the sun started nibbling at his ears," Wendell said—and he adopted a different form of sunblock. In a sense, the NPC is yet another form of sunblock—and a welcomed one. "I'm glad NREL does this. It's difficult to gather all these international people—so we'd rather come here."

NOAA, which helps share the traceable standards with other organizations, has a number of instruments to keep tuned. "It's a good way to get them out of the box and test them," Wendell said. It helps prevent potential problems. "You don't want to all of a sudden say, 'How are our standards?' There are times when you find out that something's going on. So once a year, you get all the instruments out and compare." Such testing also helps NOAA with their new instruments. Wendell and his team were planning to run tests for a professor in Brazil, but that instrument ended up stuck in customs.

Clearly, interest spans the globe. In addition to those mentioned above, researchers from Mexico, South Korea, and Taiwan were on the mesa this year, next to a variety of other scientists from Sandia National Laboratories, the University of Oregon, NASA, ARM, Lockheed Martin, and national calibration providers, as well as radiometer manufacturers. 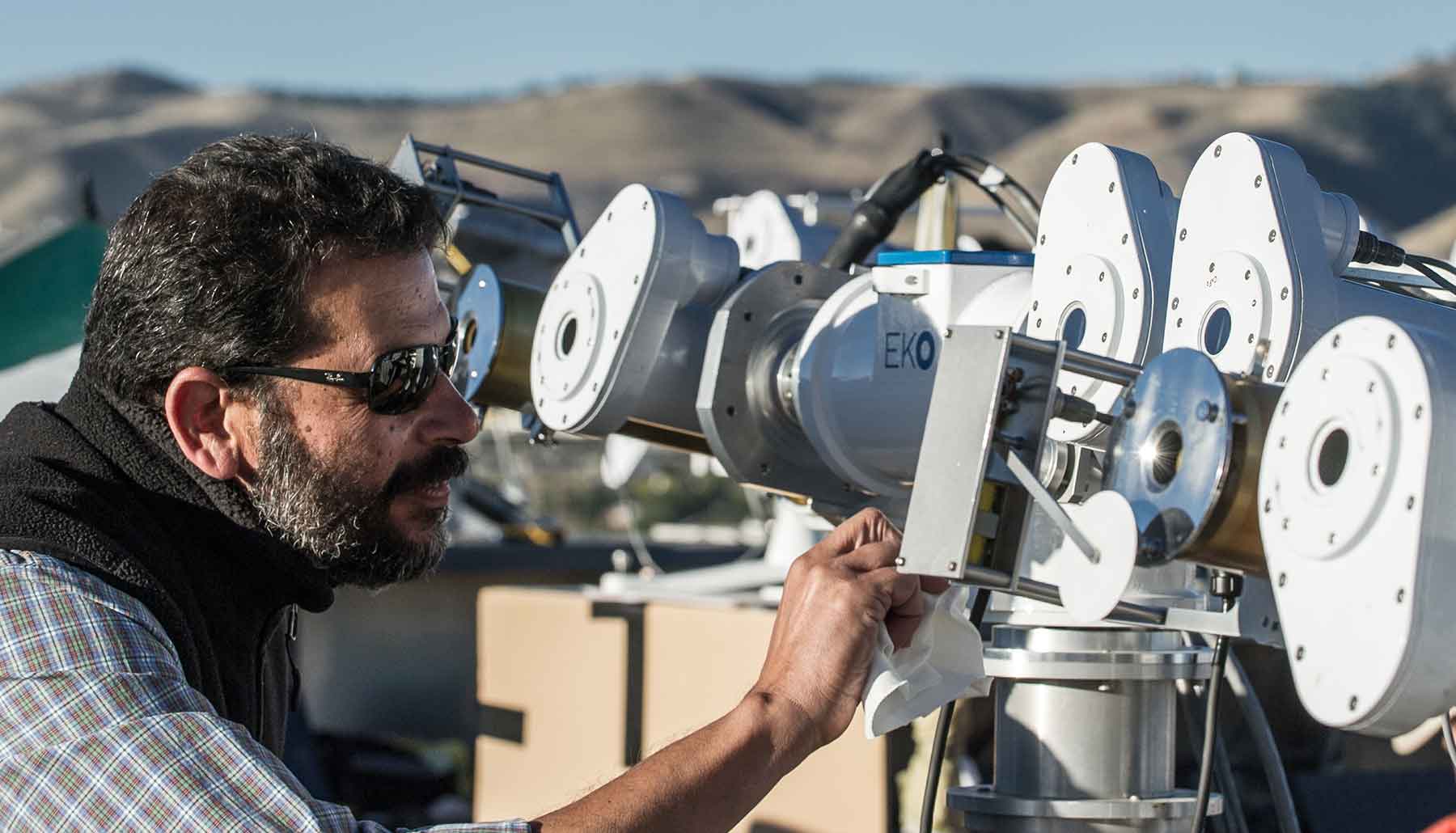 A Session in the Sun for Work That's Never Done

From dawn until dusk, the teams worked to record the solar irradiance. As the sun approached its zenith one day in blue skies, values were called out: "946" came a voice, referring to the reading in terms of watts per meter squared—how much power over a given area was coming from the sun. Up to 37 measurements can be taken during each 20-minute "sun run." The process is repeated again and again. Afterwards, data will be collected and analyzed by Reda and his team—who will then issue a report with the calibration results to each participant. In that way, their radiometer measurements can be traced back to the World Radiometric Reference.

Stoffel was among those monitoring and watching. "My personal gratification comes from my association with NREL," he said with a smile. "But as a scientist, to see that industry wide, people are asking, 'How accurately can we measure our input of solar fuel to these plants?' There are big consequences of not getting it right."

The gathering was originally scheduled to last for two weeks. But because of Colorado's sunny fall weather, the data collection took place in just one week. And when all measurements were finished, the scientists packed up their gear, headed back down the dusty road—and fanned out across the country and the world. Their work in the hot Colorado sun will potentially help the solar industry, as well as those seeking ways to combat climate change. And it certainly will keep people like Tom Stoffel smiling.