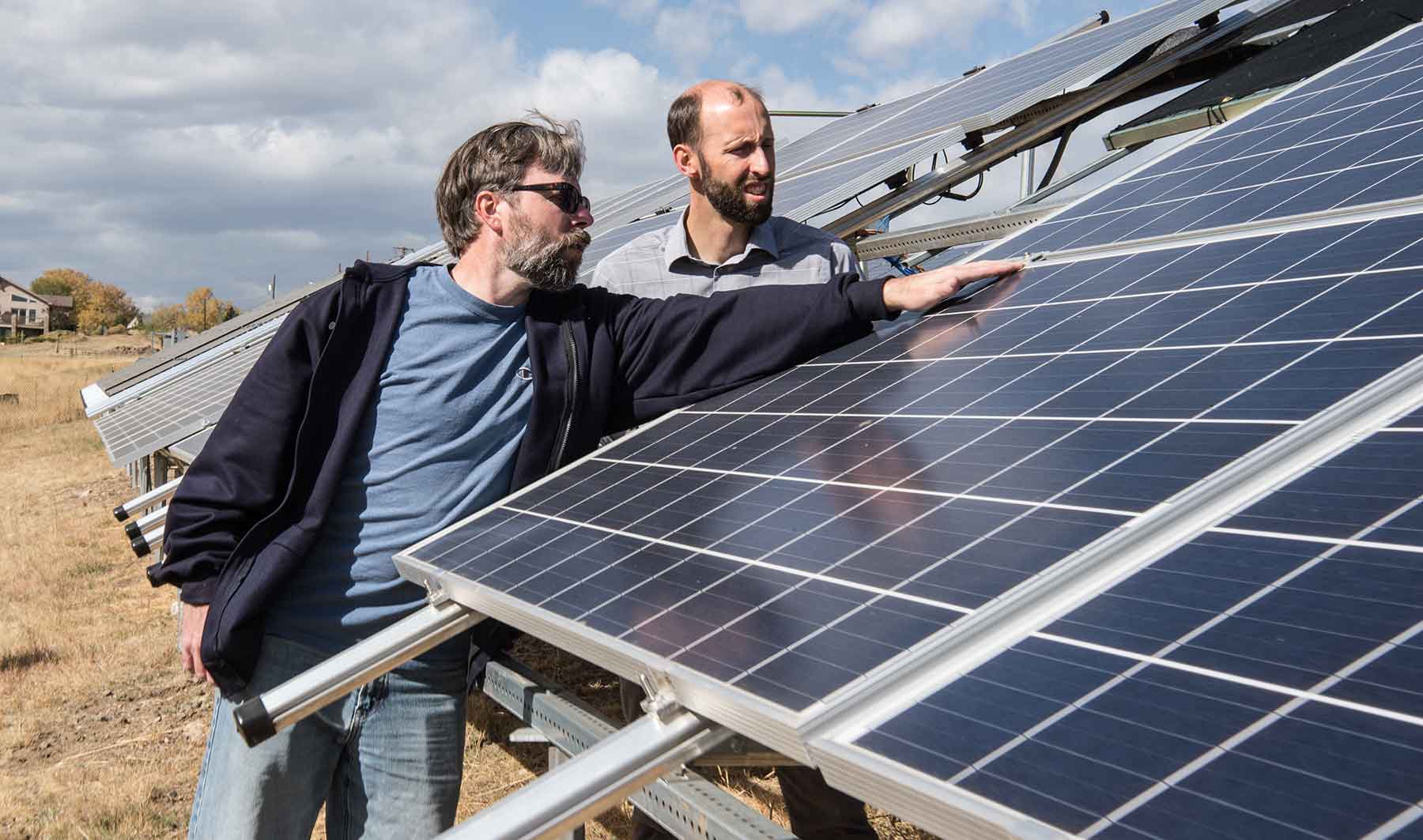 Solar panels at the Energy Department's National Renewable Energy Laboratory (NREL) are ubiquitous to the point of practically being invisible, but new rows of photovoltaic (PV) modules installed on the southern edge of campus are intended to attract attention.

The newest modules are being installed to measure how their efficiency at converting sunlight into electricity changes over time. That change, called the degradation rate, will be posted on NREL's website along with the manufacturers' names. To start, 50 solar modules made by three manufacturers will be deployed in 2017. Then, each year for the following two years, additional sets of 50 modules made by other companies will be added.

"We're going to buy up modules that represent the average cross-section of installed modules each year in the United States and see how they do over time," said Chris Deline, an engineer at NREL who also serves as director for Colorado's two regional test centers: SolarTAC (an 8-acre site near Denver International Airport) and one on NREL's 327-acre campus in Golden. The test centers, funded by the Energy Department, are used to validate new technologies and measure the performance of solar modules over time. Across the NREL campus, solar modules are integrated into the buildings, including the roof of the five-story parking garage near the new array field. Another building, the Outdoor Test Facility (OTF), has an adjacent solar array field but doesn't have much room for more modules on its concrete pads.

"The main difference is this large grassy area gives us the capability of having larger systems," Deline said. "Over at the OTF, because of our space constraints, we can only have 8 or 10 modules for a given system. With this one we're able to do side-by-side comparisons of larger systems." 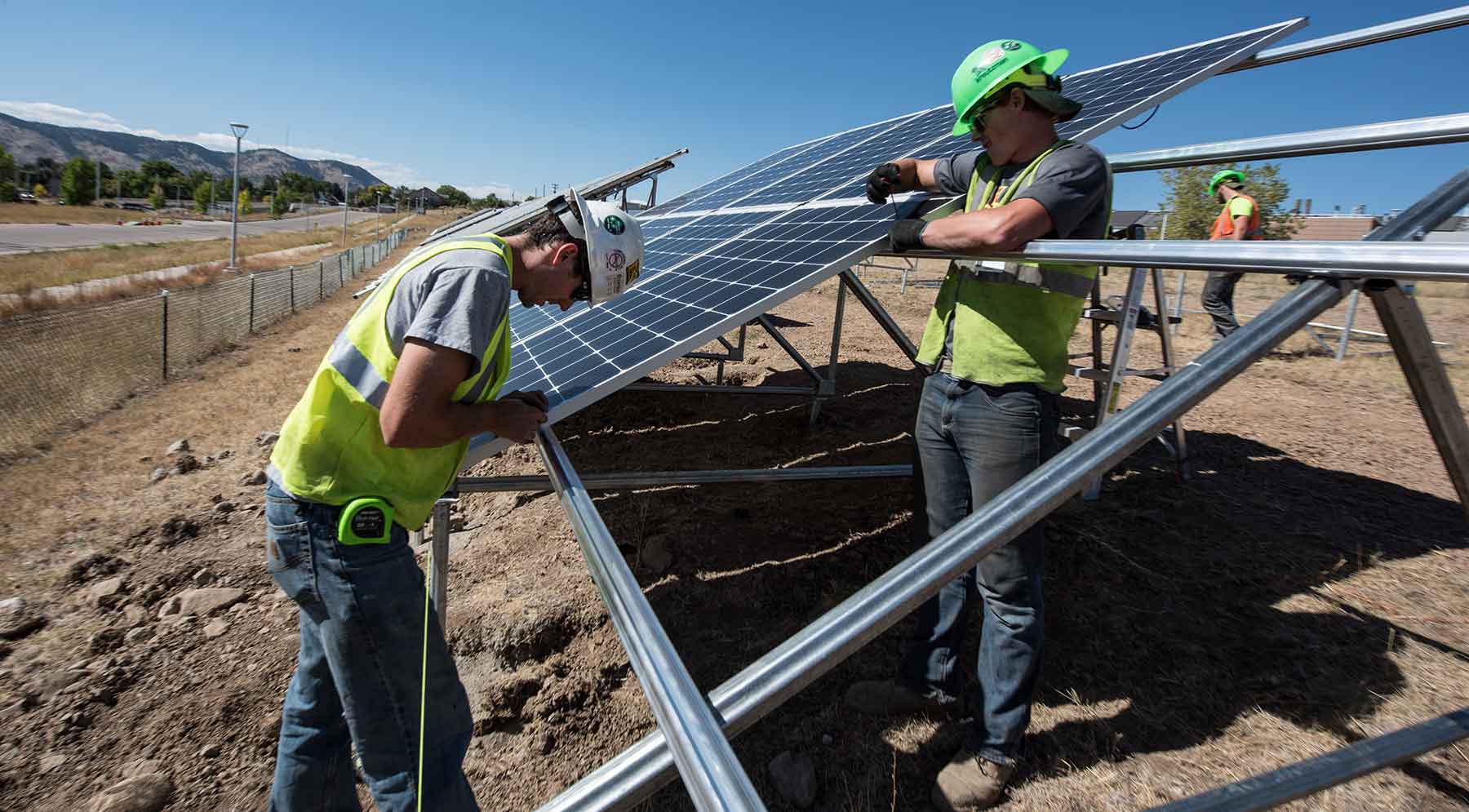 Workers install PV modules just north of the NREL parking garage. Modules in the first row are part of a small demonstration project for the PV industry to help obtain initial performance validation. The PV modules in the other rows are part of a new Energy Department program called PV Lifetime. The intent is to study, with high accuracy, the initial degradation of PV modules, and to make all of the data publicly available. Photo by Dennis Schroeder

More Modules to be Added Each Year

Once completed, the new solar array field will house four rows of PV modules. The first row, already in place, is for partner manufacturers' modules that NREL is either studying or comparing to similar products. For example, a California company, SolarCity, has NREL testing its modules against those made by a Chinese manufacturer.

Further along the row, high voltage (up to 1,500 V to represent the high voltages used in some PV systems today) is applied to modules of a range of constructions. This helps quantify their susceptibility to degradation associated with the leakage currents that can occur at these high system voltages. How the modules do at NREL will be assessed against the performance of identical setups in Singapore and China.

"This greatly expands our ability to work with commercial partners," Deline said. "The other neat thing is it allows us to get access to some of these cutting-edge products because a lot of this stuff is not commercially available. We're like customer No. 1 for some of these new technologies. It gives us the ability to get in at the forefront."

Although the degradation rates for modules will be made public, the contracted testing done for clients will be kept confidential.

The experiments at the new array field will run for three years on average. At the OTF, some experiments involving the longevity of solar modules have been ongoing for decades. No matter how long the solar panels undergo testing, all of the power they generate will flow into NREL's circuits. About 19% of electricity used on the campus comes from the sun. 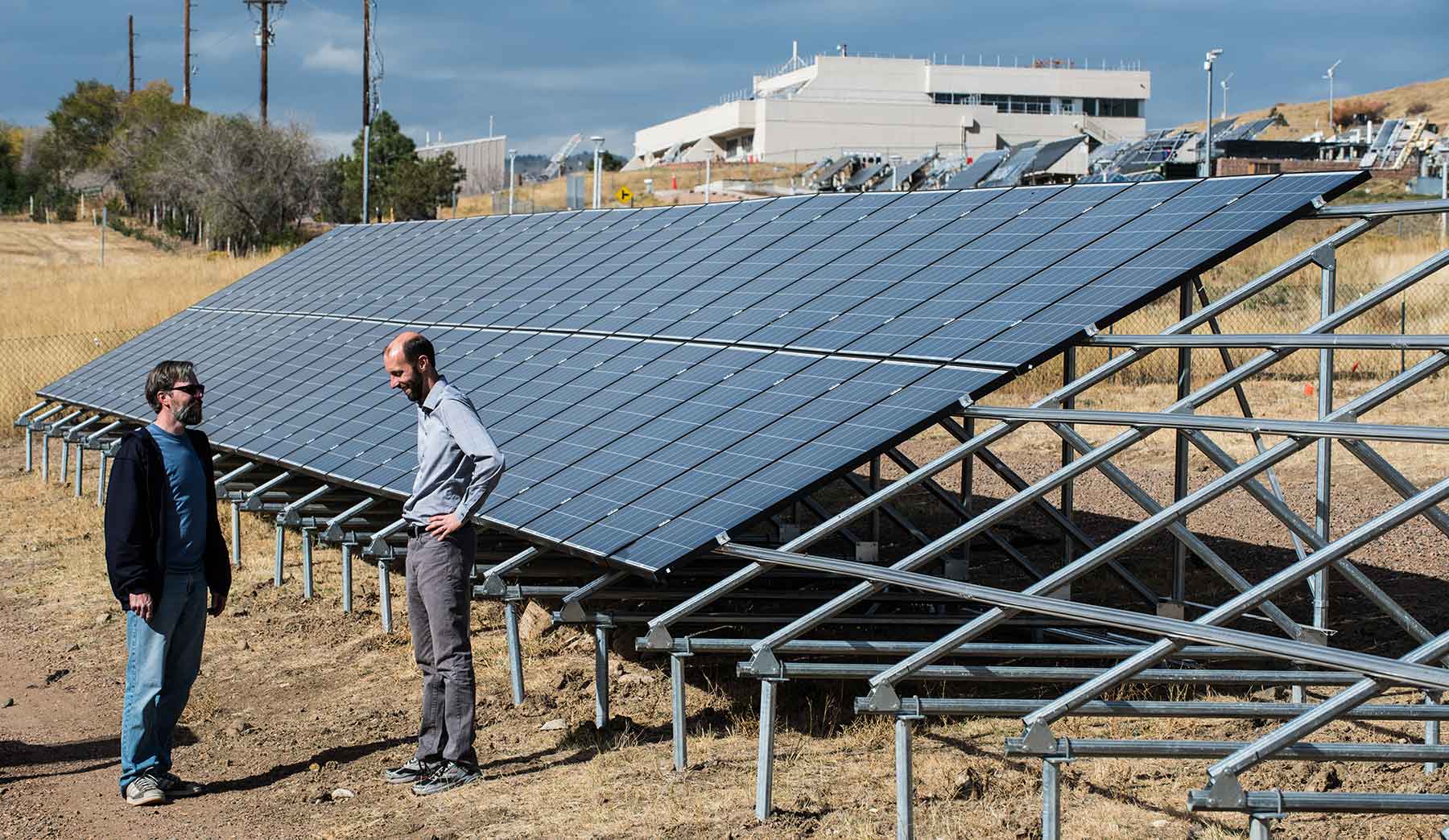 NREL engineers Bill Sekulic (left) and Chris Deline monitor the progress of the new PV array just north of the NREL parking garage. The new array will be used in part to make more data available to the public. Photo by Dennis Schroeder

Over time, solar modules become less effective at converting sunlight into electricity. NREL researchers examined the results of nearly 200 studies and found this degradation rate ranges from 0.5%-1% a year, depending on the technology used. A high degradation rate means less power will be produced over the lifetime of a PV system, and that increases the per-kilowatt-hour cost of generating solar electricity.

The performance of most PV modules is measured only once: at the factory. For studies reporting degradation rates, frequently, the degradation is calculated from the measured performance at the time of the study (after several years in the field) compared with the nameplate rating, which is the expected output a module will have. Sometimes the degradation rate follows a non-linear path, so a regular measurement will provide more accurate information.

"It is important to determine how the degradation rates vary because a module that maintains its output for many years and then fails on the last day of its life will generate a lot more electricity than a module that degrades 10% in the first year and then is stable," said Sarah Kurtz, an NREL research fellow and co-director of the National Center for Photovoltaics. A weakened solder bond, for example, could break and that would throw off the performance of a module.

Ongoing measurement of the new solar modules is part of the PV Lifetime project, a new effort led by Sandia National Laboratories. In addition to the modules deployed at NREL, similar arrays will be installed at regional test centers at Sandia and in Florida. The data collected will be published on NREL's website.

PV Lifetime is an outgrowth of the SunShot Initiative, launched by the Energy Department in 2011. The original goal of the initiative was to bring the price of solar-generated electricity down to 6 cents a kilowatt-hour by 2020. The initiative last month announced the goal is close, with prices at 90% of the way there. The revised target calls for dropping the price further, to 3 cents between 2020 and 2030.