Researchers, analysts, and engineers from the Energy Department's National Renewable Energy Laboratory (NREL) are taking their professional expertise into the field by embedding with organizations to provide sought-after knowledge. Their destinations can vary from remote Pacific islands to sites of U.S. natural disasters, and can also involve military bases, college campuses, and international business offices.

At times, they must deal with stress as they relocate or spend time away from their families—yet this adventurous group gains insights into real-world issues. Upon returning to NREL, these "embed vets" bring new insights and skills to their jobs at the lab. 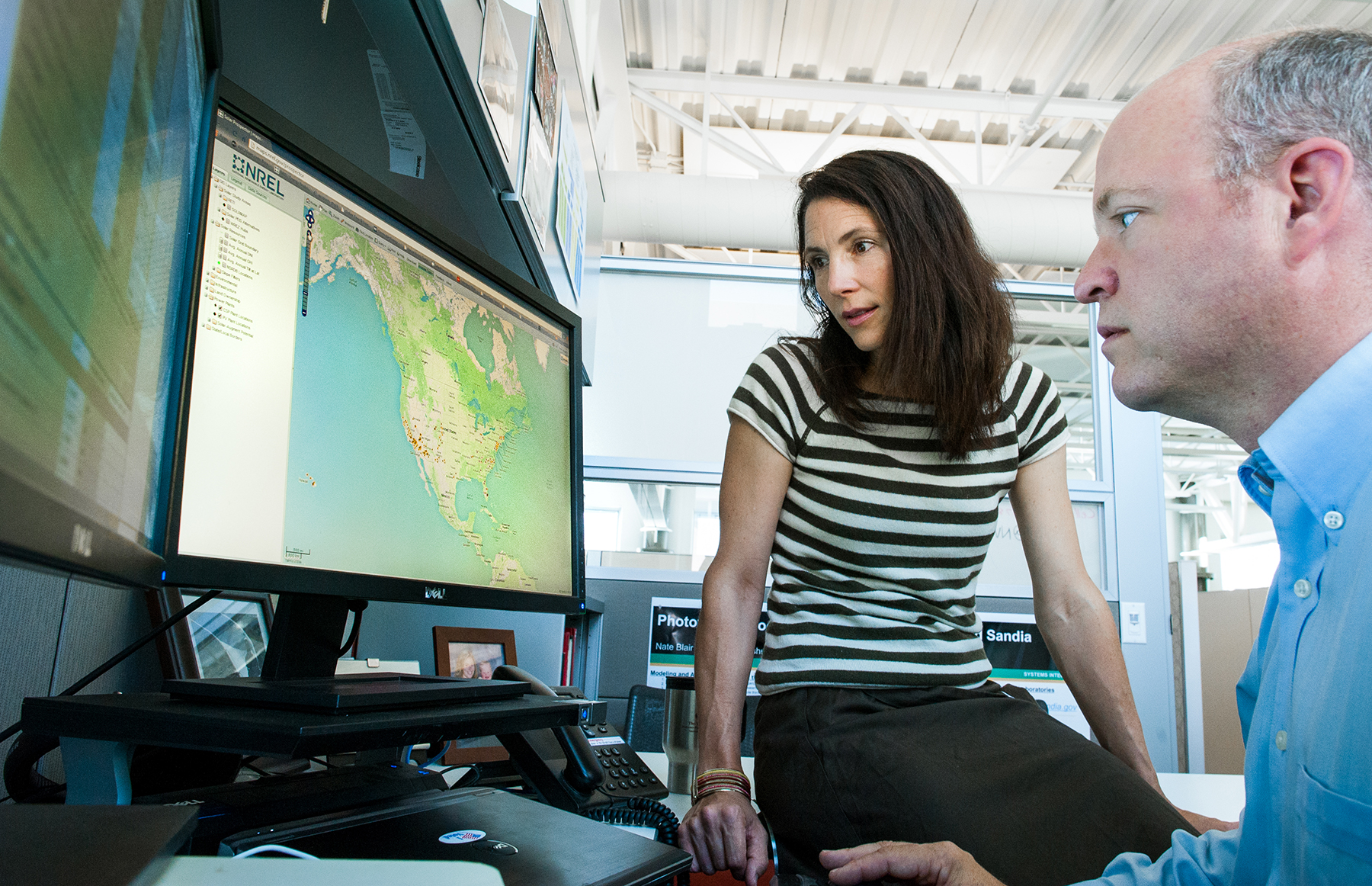 Nate Blair is "always open to new and different challenges," so when he spotted an opportunity at the World Bank in April 2015, he asked his wife if they should consider it. She was gung-ho. After checking with his manager and learning from the NREL Human Resources Office how to proceed, he applied. The couple spent hours online to see if it made sense to pull up their three young kids—and a dog—to transfer to Washington, D.C.

His job with the World Bank's Energy Sector Management Assistant Program (ESMAP) was funded by the Energy Department to enable cooperation with the Clean Energy Ministerial and the Children's Investment Fund Foundation. Under ESMAP, Blair worked on various clean energy projects and renewable energy grid integration. He studied a few dozen other systems and visited several other countries—and it opened his eyes. Having spent most of his 20-plus years of energy modeling and analysis focused on the (relatively) well-functioning U.S. energy system, Blair learned that elsewhere, things aren't so reliable.

"Countries and utilities that don't have the capital or expertise to operate a market with deeply engrained operational modes for fossil fuels make the deployment of renewables seem almost impossible on a grand scale," he wrote in a blog.

As he noted, nothing magically happens to advance clean energy. It takes perseverance and multiple attempts to establish a project in a developing country. Finally, "capital from the World Bank flows in and the first project on the roadmap starts. The country takes the first step up the ladder. But, the effort is enormous. It's a marathon, not a sprint," he wrote.

Blair returned to NREL in July, confident that "a number of countries are looking at solar and wind" in a world with photovoltaic system prices dropping. Additionally, with an NREL connection to the World Bank established, he believes others from the lab will continue the effort there.

Mike Callahan stands at a solar/wind farm on Oahu during his assignment in Hawaii. Photo from Mike Callahan, NREL

Mike Callahan is used to being overseas. After starting his career in the late 1990s working in the oil industry in five West African countries, he has now lived abroad for almost six years, including time in Europe and South America. "I have been very excited to be supporting clean energy projects in Oahu, Kauai, and Guam, reducing the islands' reliance on imported oil," he said.

Starting in 2014, Callahan relocated to Hawaii to focus on the Department of Navy's efforts to quickly deploy renewable energy at military installations in the Pacific region in pursuit of their 1-gigawatt worldwide renewable energy goal. At the same time, Callahan has built on NREL's clean energy efforts in the islands. "I have been fortunate to represent NREL in Hawaii and Guam for a wide variety of topics, including NREL's work on advanced inverter testing, community solar program development, and sustainable energy in remote Indonesian grids."

He's learned as much culturally as he has technically. In some cases, Callahan experienced how communication challenges created larger barriers to the deployment of renewable energy than the technical challenges—such as encountering a campaign against the installation of so-called "windmills." Callahan explained that "it takes time to understand a culture and develop relationships to be able to catalyze positive change, particularly on an island." He said that NREL's offsite assignments are helpful for the communities, clients, laboratory, and staff because they create an exchange of information that helps all parties develop a mutual understanding of the challenges of increasing renewable energy deployment. Callahan, who will be leaving Hawaii in September to provide similar support to the Navy from San Diego, said "it has been a great, enriching experience, and I hope to continue to use the knowledge I've gained to accelerate the transition to a clean energy economy."

In 2009, when the U.S. Department of Interior (DOI) was looking for technical assistance for its Office of Insular Affairs, NREL came to mind. DOI wanted to bring governors from the Pacific territories to NREL to have a conversation about alternatives to fossil fuels in locations that were 100% fossil-fuel dependent. After the NREL team successfully conducted a weeklong session with officials, utilities, and educators, DOI backed NREL to assemble a team to perform a technical assessment to identify opportunities on Guam, the Commonwealth of the Northern Mariana Islands, and American Samoa. Misty Conrad's group assembled data on topics such as energy consumption, renewable and efficiency opportunities, and policy gaps. It wasn't an idle exercise; the results were published, and "a lot of energy developers and vendors found it very helpful. It helped reduce their risk when responding to RFPs," she said.

Drawing on her background in strategic planning, Conrad then organized another round of workshops. Results published 18 months ago show how "things would actually get done—producing strategic plans and action plans." The benefits of the work are enormous, she said. "Islands are amazing laboratories. You are faced with all the challenges in one place—from social acceptance to renewable grid integration. They're on a small enough scale that you get to see everything, and the solution emerges. Lessons learned can be shared, and solutions can be replicated."

As for her personal life, being away from home can be difficult, "but my kids have grown up experiencing it all with me. This is a good time in my life to do this kind of work. I love it. And I've grown professionally, especially my diplomatic skills, because you're dealing with so many different sectors in one small space."

Lars Lisell was familiar with Sustainable CUNY, a program at The City University of New York (CUNY), when he began contemplating a venture there. The mechanical engineer had been part of NREL collaborations with CUNY before and "thought it would be fun do a sabbatical." After consulting with his manager, he made some preliminary calls to CUNY to explore the idea. "It seemed like a long lead time, but once there was a real project, it happened quickly," he said. Lisell and his wife were packing only four months after CUNY sent a letter of invitation for a yearlong assignment in 2016. In late December, they "pulled into New York in time for a big snowstorm."

His day-to-day work at NREL in deployment was as a "nuts-and-bolts renewable energy generalist" running energy models and evaluations in the field. At CUNY his time is split between two programs: one is a "grid ready" project looking at New York City facilities that can host large solar arrays, working through technical barriers for interconnections, then posting the information on a state solar map for users; the other is a multiyear project with stakeholder input into what resources can be developed to move the solar and storage market in New York State.

"It's been a tremendously positive experience—seeing how another organization works; seeing things they do well," Lisell said. The time away allows him to reflect on how the lab could make improvements and try new strategies to be successful. There are personal benefits, too. "It's rejuvenating. This has made me remember why I wanted to work in this industry in the first place." 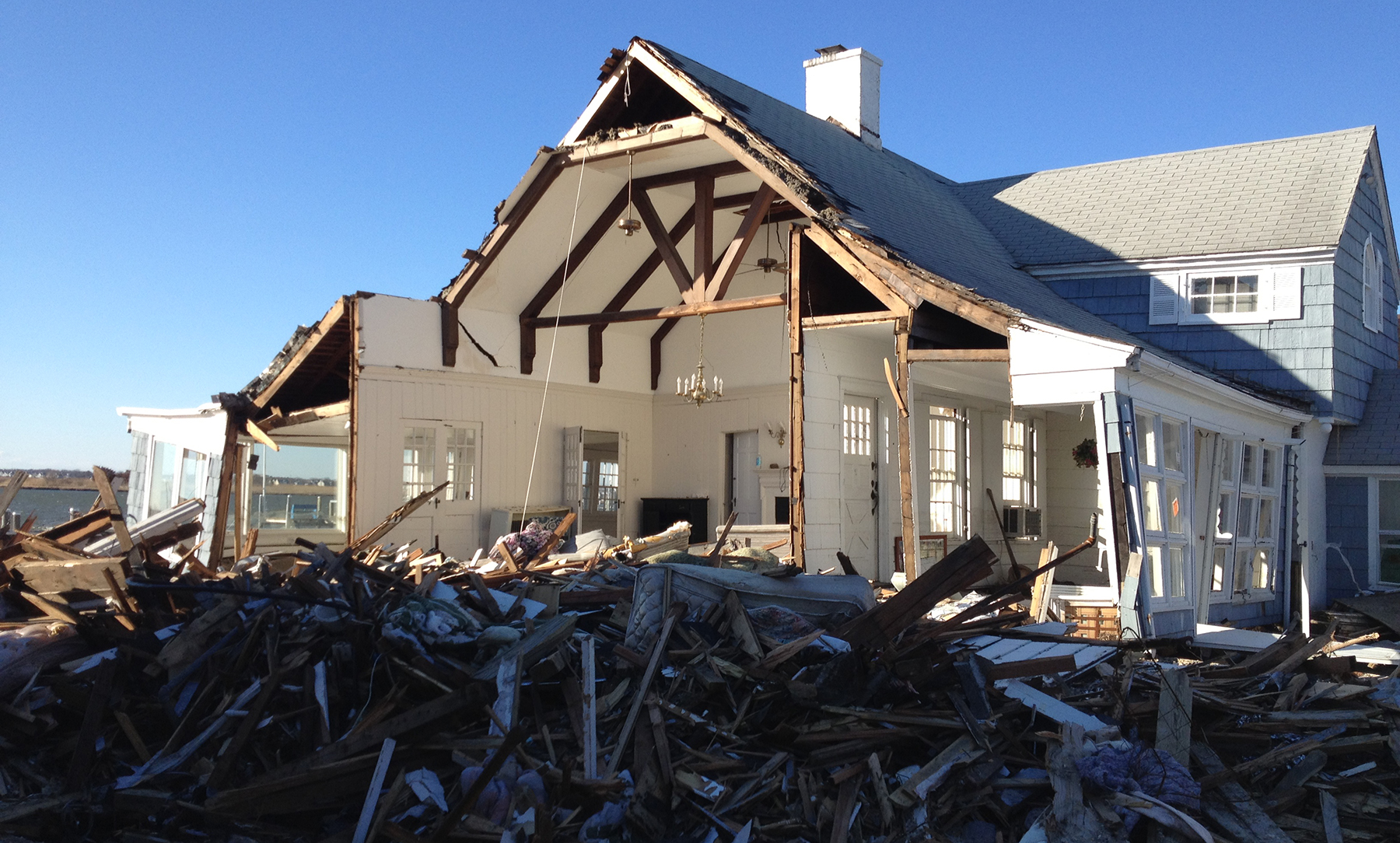 Eliza Hotchkiss was on the ground in New Jersey to help with recovery efforts in the aftermath of Hurricane Sandy. Photo from Eliza Hotchkiss, NREL

NREL had provided disaster recovery support, initially under the Energy Department, for a number of years before Hurricane Sandy. After the storm, a small group of NREL staffers volunteered and was chosen to participate in technical work. Eliza Hotchkiss and Tim Tetreault were two of the four NREL staff embedded in Hurricane Sandy recovery efforts on the East Coast.

Devastation surrounded them. "We took a few conference calls from vehicles, and we would watch buildings being demolished while we were on the phone," Hotchkiss said. "Because we were on the ground, we were able to create a pretty good framework for potential opportunities." The team came up with a list of 69 recommendations that, through the Energy Department and the U.S. Department of Housing and Urban Development, were sent to the Hurricane Sandy Rebuilding Task Force. In August 2013, the task force released a rebuilding strategy to serve as a model for communities across the nation facing natural disasters, and to continue helping the Sandy-affected region rebuild. The recommendations went up to the White House. "We've been seeing a lot of these ideas being implemented in the last few years, and that impact is really positive," Hotchkiss said.

More recently, Tetreault, a member of the IAC—which works with federal agencies and other organizations that have clean energy goals — headed to D.C. with the Department of Defense (DOD) in December 2015. He currently manages the DOD's Environmental Security Technology Certification Program (ESTCP), which seeks to reduce DOD installation energy consumption and carbon footprint.

According to Tetreault, benefits of his assignment include "gaining an understanding of the energy challenges facing military installations and collaborating with Energy Department and DOD labs to identify technologies to overcome these issues. More broadly, I'm learning how the DOD technology demo and commercialization machine works."

What It Means for NREL

Whether in Colorado, Washington, D.C., or across the globe, NREL staffers are finding that being embedded in other organizations provides them a window into a new world—and a portal for personal growth.

"The opportunity to work onsite with other organizations is a win-win for both NREL and the staff," said Nancy Carlisle, director of the IAC. "For NREL, the assignments encourage a greater level of partnership because we better understand the needs of the organization, while they learn more about our capabilities. For the staff, these are growth opportunities."

Organizations echo the belief that such embeds are beneficial. "We have been grateful to have Lars on sabbatical from NREL at Sustainable CUNY. As an engineer, he brings a level of technical expertise and a method of approaching problems that our team previously did not have," said Jeff Irvine, manager of Sustainable CUNY's Solar Partnership Program. "What has impressed me the most about Lars is the diversity of projects he has led and to which he has contributed. Lars combines a broad skill set with the ability to take technical deep dives, which has been a huge asset to our team."

Even after NREL's employees return from their assignments, the connections they forged continue—and the results of their efforts provide ongoing benefits to stakeholders. And NREL's embedded staffers come back brimming with not only new ideas, but exciting personal experiences. Lisell summed it up, saying that whether riding his bicycle or walking to work in the Big Apple, "it is super fun to live in New York."