The National Park Service (NPS) marks its centennial on August 25, and to commemorate the milestone, NPS is arranging special events across the country. But as Americans head out to the national parks, they may be unaware of NPS' bold sustainability plan that aims to preserve the country's national wonders into the next century. In fact, a large part of that movement has already been buoyed by many energy efficiency and renewable energy projects carried out at the parks with the help of the Energy Department's National Renewable Energy Laboratory (NREL). These projects are currently enhancing the park experience by providing cleaner air and contributing to a healthier environment.

Consider the problem of providing electricity to national park facilities. In many cases, bringing elevated power lines into a park would detract from the scenery, but buried power lines may be too expensive or simply unfeasible. Until recently, the fallback choice was to rely on generators, but they produce fumes and noise that go against the concept of maintaining a serene, undisturbed ecosystem in a national park. Renewable energy technologies are an obvious choice to reduce a park's dependence on generators while shifting to a clean, quiet source of power. NREL has found numerous related opportunities at many of the national parks, focusing on everything from energy efficiency to power supplies to in-park transportation.

The Energy Department provides support for all federal agencies in meeting their energy goals through its Federal Energy Management Program (FEMP), for which NREL provides technical assistance. Over the past decades, NREL has provided continued support to NPS through FEMP's technical assistance program, including the design of energy-efficient buildings for the Zion National Park Visitor's Center in Utah and the Grand Canyon National Park Bookstore in Arizona. Recently, NREL has been working with Mesa Verde National Park to minimize energy consumption in a building that serves as a combination visitor's center, curation facility, and office space. The highly efficient, daylit building draws on solar photovoltaics, solar hot water, and a micro hydroelectric turbine for its energy. 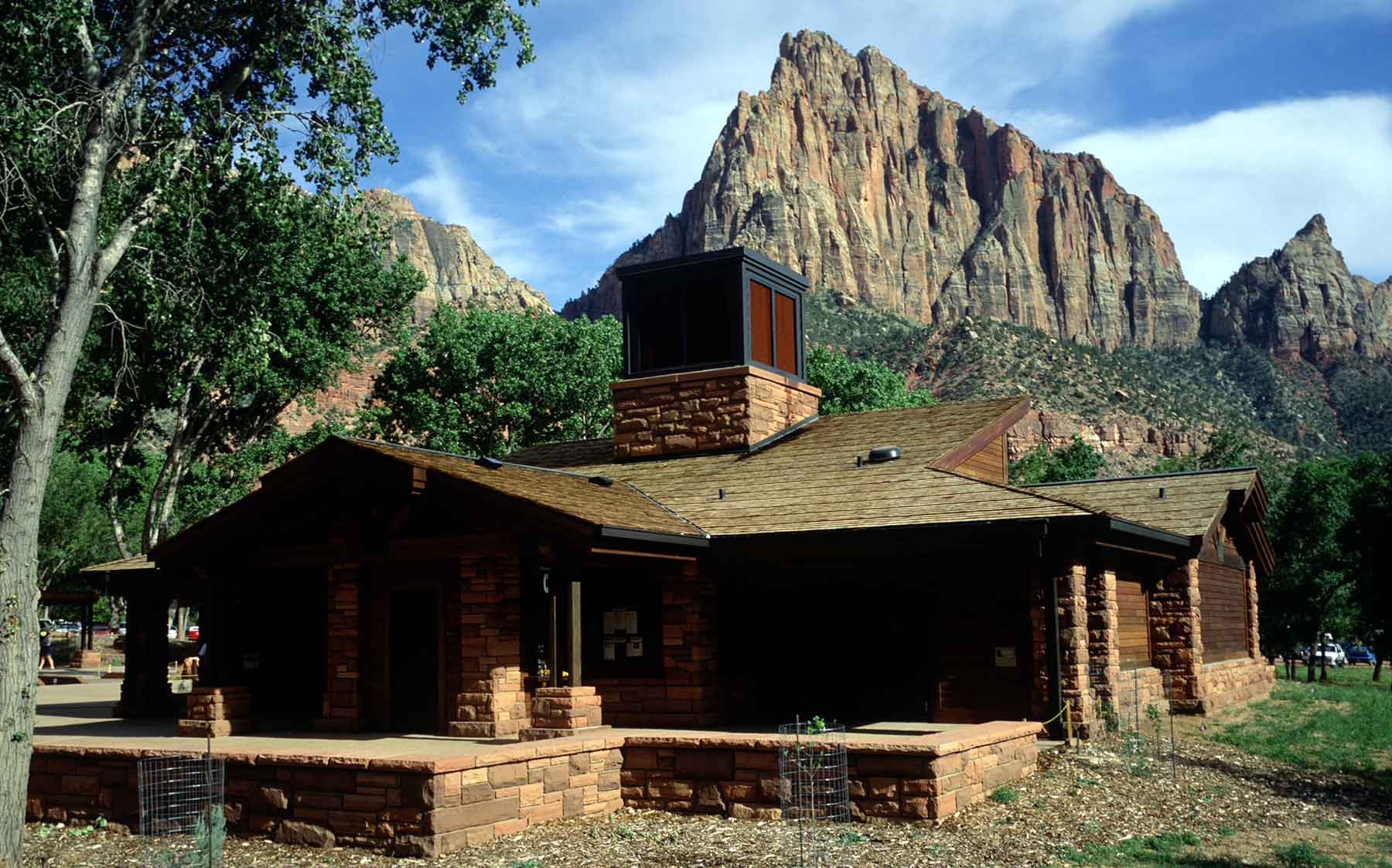 Another FEMP project started in 1995, when NREL was enlisted to perform solar monitoring on Alcatraz Island, conduct a feasibility study of installing solar panels on the roof of the main cellhouse building, and model what a solar installation would look like.

The project later received funding through the American Recovery and Reinvestment Act, and in 2012 NREL worked with the NPS to support the installation of a 305-kilowatt solar photovoltaic array with a 2-megawatt-hour battery system to store surplus electricity during the day, for use later in the evening. In 2013, the island's solar panels decreased diesel generator use from 100% to 56% of the time, producing more than 325,000 kilowatt-hours of electricity while cutting greenhouse gas emissions by about 325 metric tons of carbon dioxide per year. Additional system optimization, performed recently, is expected to boost these results. 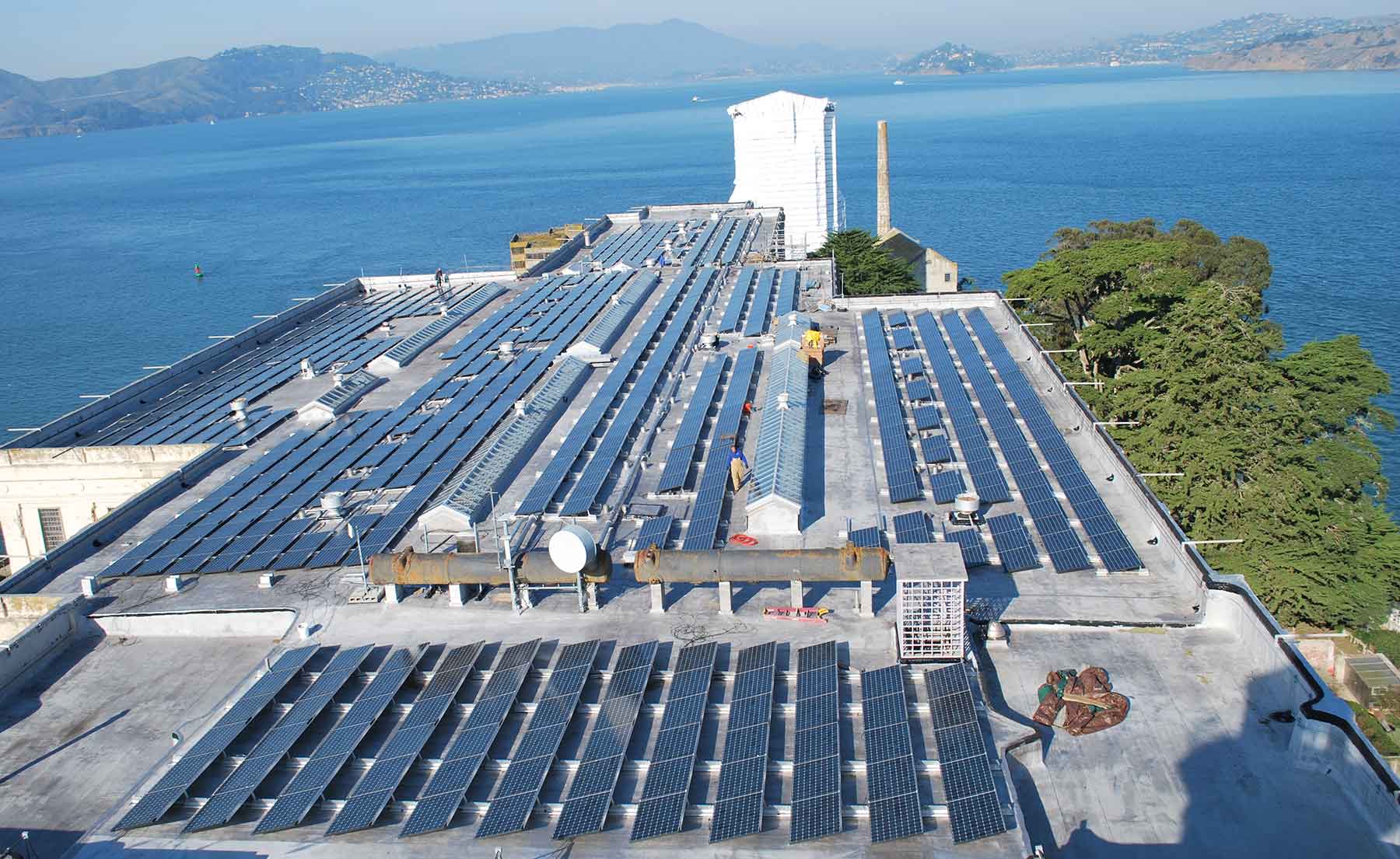 Solar panels on the roof of Alcatraz's cellhouse building, as well as a battery storage system, are helping to significantly reduce the use of diesel fuel to power Alcatraz Island. Photo from the National Park Service, NREL 21415

Of course, Alcatraz Island is only one NPS facility among hundreds, and many parks are working to understand their opportunities to benefit from energy efficiency improvements and renewable energy installations—so where to start? To answer that question, in 2014 FEMP initiated a "deep dive" with the Department of the Interior (DOI)—the parent agency to the NPS—to determine which sites presented the best opportunities for renewable energy. This partnership aligns with NPS' Go Green initiative under their Call to Action Campaign, which rallies all employees and partners to advance a shared vision toward 2016 and beyond.

"The partnership between FEMP and NPS is a great model for an agency-wide or building portfolio approach," said Rachel Shepherd, FEMP's Renewable Energy Program Manager. "NPS is building an efficient, comprehensive, and replicable project delivery process throughout the parks."

One of the tasks included in the deep dive effort employed NREL's REopt tool to take a comprehensive look at 320 parks and identify candidate parks where renewable energy could most cost effectively be installed. That screening provided a prioritized list, which was further narrowed to identify a target list of 25 parks that are candidates for further evaluation. In addition to the REopt results, other criteria used to develop the initial 25 sites include energy costs, the number of annual visitors, and interest and support from local NPS staff.

"NPS is seeking to install renewable energy across its portfolio, but with limited budgets and hundreds of parks across the country, it can be difficult to identify and prioritize the best opportunities," said Scott Haase, NREL's laboratory program manager for the DOI. "The process we are working on now with NPS and FEMP will help develop a robust pipeline of cost-effective projects that can be installed as agency funding or other financing becomes available."

To continue that effort, NREL has just signed a five-year agreement with the DOI Sustainability Office to draw on NPS funding, in addition to the FEMP funding, to help NPS develop clean energy projects at the most viable sites.

"What this agreement has allowed us to do—for the first time in the history of the National Park Service—is to analyze our current status and to understand the potential for renewable energy at the parks," said Shawn Norton, head of the NPS Sustainable Operations Branch. "It will help us develop a plan for moving the organization to a much higher percentage of renewable energy generated on our land."

NREL's role in this effort will mainly involve detailed site analyses to determine the best approaches to meet each site's energy needs and goals. In the first year, the work will include visits to conduct an analysis of site conditions, identification of land and roof area available for renewable energy technologies, and additional data gathering, followed by a detailed REopt analysis. This will lead to a set of recommendations for each site to consider. Additional sites will receive remote technical support, including updating past renewable energy analyses and helping with utility interconnection agreements.

While much of NREL's work in national parks has focused on buildings and other facilities, vehicles are another major source of emissions in the national parks, including both visitors' and NPS' park vehicles. Since 1993, DOE's Clean Cities program has worked with nearly 100 local coalitions to cut petroleum use in transportation, through such approaches as alternative fuels, idle-reduction measures, fuel economy improvements, and emerging transportation technologies. In 2010, Clean Cities collaborated with NPS to create the Clean Cities National Parks Initiative, which has resulted in 32 projects in 29 NPS locations.

"Just weeks ago, DOE and NPS signed a new agreement between that enables that partnership to extend through at least 2021," said Kay Kelly, the NREL lead for the initiative. Kelly says that each year, the initiative funds 5–10 alternative fuel, vehicle, and infrastructure projects led by NPS units and local Clean Cities coalitions.

"We help partners implement their projects by providing them with information that helps them procure vehicles through the General Services Administration and install infrastructure," Kelly said. "After vehicles and supporting fueling infrastructure are deployed, the coalitions and the parks collaborate on campaigns to elevate awareness in the local community to promote the Park Service's efforts to reduce emissions and fuel use."

The initiative has resulted in a wide range of alternative fuel projects. For example, electric charging stations are popular because they enable the use of plug-in hybrids, which have a long range that often comes in handy in the parks. Propane has proved to be an excellent fuel for many of the parks' pickup trucks and shuttle buses, as well as mowers. After all, the NPS maintains a lot of grass—like the National Mall, which is just one of many NPS sites mowed with propane-fueled mowers.

"The Clean Cities initiative has allowed the National Park Service to look beyond our traditional ways of doing business and really analyze our current operations and develop a way forward for the organization in the areas of alternative fuels, alternative fuel infrastructure, and alternative fuel vehicles," Norton said.

"Through the initiative, the NPS sees NREL as a go-to for technical assistance, guidance, and strategic planning to understand how it can reduce fuel use and emissions in its own fleets, while also addressing the largest source of emissions, namely visitors," Kelly said. "The Park Service receives more than 300 million visitors each year, so it's important to implement strategies to reduce visitor-related emissions during their visit and travel to and from the parks."

To help address emissions produced by visitors' vehicles, NREL developed a suite of educational materials for both the parks and their visitors, called the Green Rides Toolkit. This toolkit gives park managers the important resources they need to address this issue.

"For the Energy Department, one of the key objectives for engaging and partnering with the Park Service is public awareness," said Dennis Smith, the Energy Department's National Clean Cities Director. "Yes, these projects help the parks achieve important energy and emissions reduction goals, but they also have the potential to inspire millions of park visitors to do similar things in their communities when they return home. The benefits reach far beyond the boundaries of the parks."