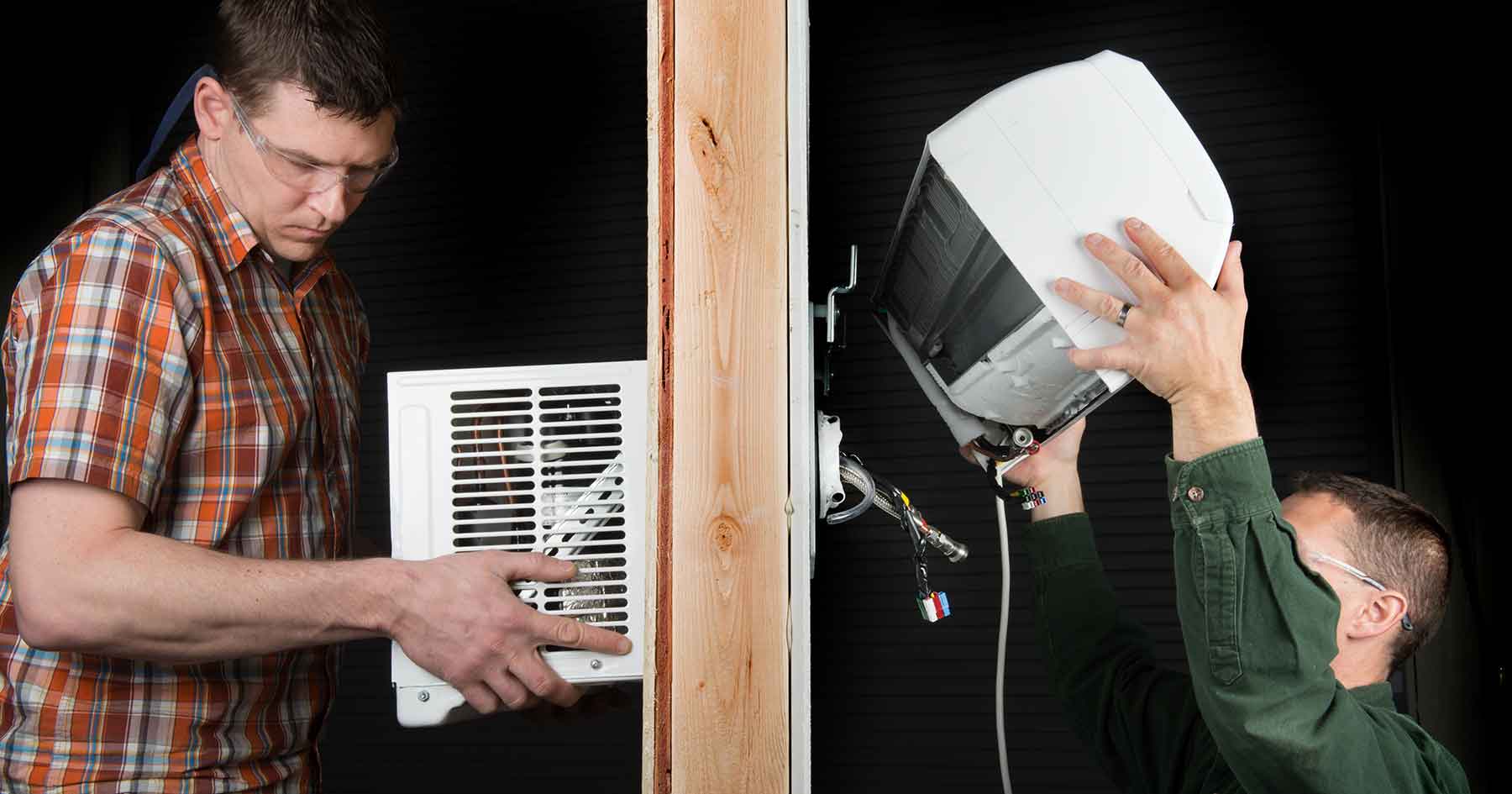 Engineers Chuck Booten and Jon Winkler experienced their first "Ah-ha!" moment together about three years ago as they were testing window air conditioners for an Energy Department project. The two National Renewable Energy Laboratory (NREL) senior engineers were trying to figure out how to model window air conditioners (ACs) in residential buildings in hopes of understanding competing technologies.

"We were sitting there basically saying, 'There's got to be a better way. Why do people want to stick these things in their windows to get cooling?'" Winkler said.

The engineers in NREL's Residential Buildings research group were familiar with one alternative in the market, the mini split heat pump—but those devices, which are efficient and locate noisy compressors and condensers outside a house where occupants aren't bothered by them, can be 10 times more expensive than typical window units, in part because they require professional installation. But Booten and Winkler were thinking of the do-it-yourself customer.

Then the idea hit them.

"We asked: 'What do you really need to connect the indoor and outdoor parts of an air conditioner?'" Booten said. They quickly realized that there are only a few AC components that need to communicate with each other inside and outside of a building. By drilling a small hole or two, a user could install one with a line connecting the two parts. "Those things can be fit in a pretty tight little hole," he recalled. "We started thinking about ways in which you would do that."

While they hadn't yet named the device (another "Ah-ha!" moment that would come later)—the concept for what would become the "EcoSnap-AC Heat Pump System" was launched. In short, a simple snap-together system—with an indoor and outdoor part that snap together with a connection through a wall—would provide the convenience of a room air conditioner while delivering higher efficiency, reducing noise, improving aesthetics, and eliminating air leaks and water intrusion.

However, while the idea seemed promising, bringing the concept to reality was not as easy as snapping your fingers.

Chuck Booten drills a hole in the wall to mount the EcoSnap-AC. Photo by Dennis Schroeder

The Evolution of an Idea

As part of the testing process, Booten looked into how much air leaks through typical AC units installed through a window. He learned that even with the use of accordion panels supplied by the manufacturer, the units still leak a lot of air—comparable to having a 5-square-inch hole in a house. So the pair began to think that energy savings is what would really sell a new kind of AC device.

Modern mechanical air conditioning has been around for more than a century. And while window air conditioners remain popular—with an estimated eight million sold annually in the United States— manufacturers are reluctant to embrace innovation in such a commodity market.

Still, there are plenty of drawbacks to window air conditioners: they are noisy; they have to be removed or covered seasonally because they typically don't provide heating; they can present security risks, making homes vulnerable; and they can be unsightly, rendering a window useless.

"When you put them in a window, that creates as many problems as it solves," Winkler said.

The pair worked on their alternative concept, but progress was slow, though they did file some records of invention and eventually a provisional patent for their intellectual property (IP).

Then came a break in 2014, when the Energy Department announced Lab-Corps, a program that aims to better train national lab researchers to successfully transition their discoveries into high impact in the private sector. Booten and Winkler jumped at the opportunity and were accepted into the first cohort of the seven-week program in 2015.

"This is your chance as an engineer to look at all of the things that are important about getting something done for real, commercializing technology and getting your ideas out there—which you never get paid for as an engineer," Booten said. In the past, he joked, engineers like him dismissed such planning as being "just business school," and projects "'just happen.' But you get a chance to look at it—no, it will not 'just happen.'"

Lab-Corps encourages researchers to talk to people in their marketplace, which Booten and Winkler did eagerly. And their outreach paid off. When they called the air conditioning buyer for a leading big-box retailer, he liked their pitch and invited them to fly to corporate headquarters the very next week.

"We hung up the phone, and we're going, 'Oh man. We don't have a prototype!'” Booten said, laughing. The pair, along with technician Lucas Phillips, built their first hardware version that weekend, cannibalizing some existing AC units.

The meeting was a success. "The guy pointed at the prototype, and said, 'I have been asking manufacturers for exactly this thing—and they won't build it.' That was another 'Ah-ha' moment—the kind of validation you're never going to get until you have things on the shelves," Winkler said.

While the information was valuable, there was no deal because the NREL team isn't a company, and can't produce the units. But it inspired Booten and Winkler, and upon returning to NREL, they built their first "real" prototype, which incorporated their IP. 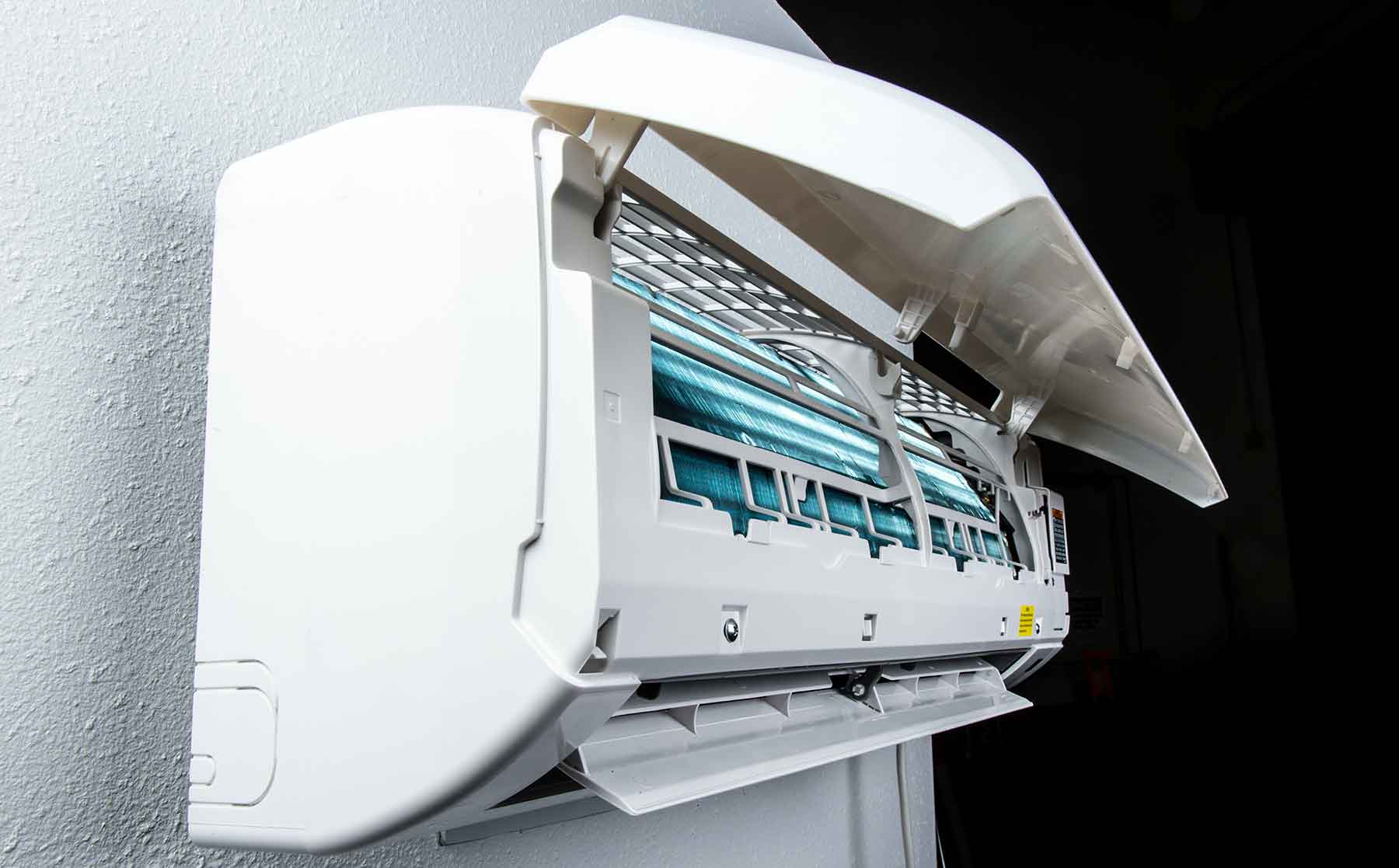 EcoSnap-AC is a simple snap-together system—with indoor and outdoor components that snap together with a connection through a wall. EcoSnap-AC provides the convenience of a room air conditioner while delivering higher efficiency, reducing noise, improving aesthetics, and eliminating air leaks and water intrusion. Photo by Dennis Schroeder

Looking Ahead to a Cooler Future

Lab-Corps gave them a big lift. "It really gives a new perspective that you never get a chance to have otherwise," Booten said.

Now they thought in terms of "value propositions" for their device—its name courtesy of fellow NREL engineer Eric Kozubal, who playfully suggested "EcoSnap-AC" while brainstorming with Booten one day. Kozubal is co-inventor of the Desiccant-enhanced Evaporative (DEVAP) Air-Conditioning Cycle, which won an R&D 100 Award—so his input isn't taken lightly. Booten and Winkler snapped up the name.

Their idea is to look at the "do-it-yourself market, where someone could go to a big-box store, pick one of these up, and install it in a matter of minutes," Winkler said.

They envision a price premium of about $100 over the average cost of window ACs—which typically run about $250 a unit. But that's key: most buyers of these, they know, are on a tight budget—so the mini split isn't an option. "Our unit allows you to connect things together without having to take care of any of that," Winkler said. Part of their actual IP is about how the two units will be joined. A user wouldn't need any tools except a drill to make a single hole through the wall and mount the parts together; the system uses compression on that wall to maintain its rigidity and an air- and water-tight seal.

The EcoSnap-AC team is currently looking for investors and exploring national and state grants, as well as NREL Laboratory Directed Research and Development (LDRD) program backing.

"We are trying to line up private investors," Booten said. "This is one thing we learned in Lab-Corps. You have to be a lot further along with your product than you think before you can get private investors interested."

They've also talked with a window AC manufacturer. There are two basic paths to getting EcoSnap-AC to market that way: the easier one is for a manufacturer to license their IP, and start building and selling EcoSnap-AC; the other path is to start a company and have the company begin manufacturing a few units to get a little traction in the marketplace before some large company takes an interest. "You have to make a dent in their sales to show up on their radar screen," Booten said.

As to why someone else hasn't come up with a similar concept, Booten smiled and said, "They're not as smart as we are." Both he and Winkler laughed. But for whatever reason, they see an unexploited niche—and they seek to plug it.

Both inventors believe that energy efficiency will be an outcome, but wouldn't be the first reason consumers would buy an EcoSnap-AC. "It's sort of like taking cough medicine and making it taste better,” Booten said. “If cough medicine tastes like candy, people will have no problem taking it." So if the EcoSnap-AC plugs that 5-square-inch hole associated with window installation—and people also enjoy the benefits of an unobstructed view and a cool, quiet house—Booten and Winkler will be happy that their “Ah-ha” moments turned into “Ahhh” moments. Now that would be cool.