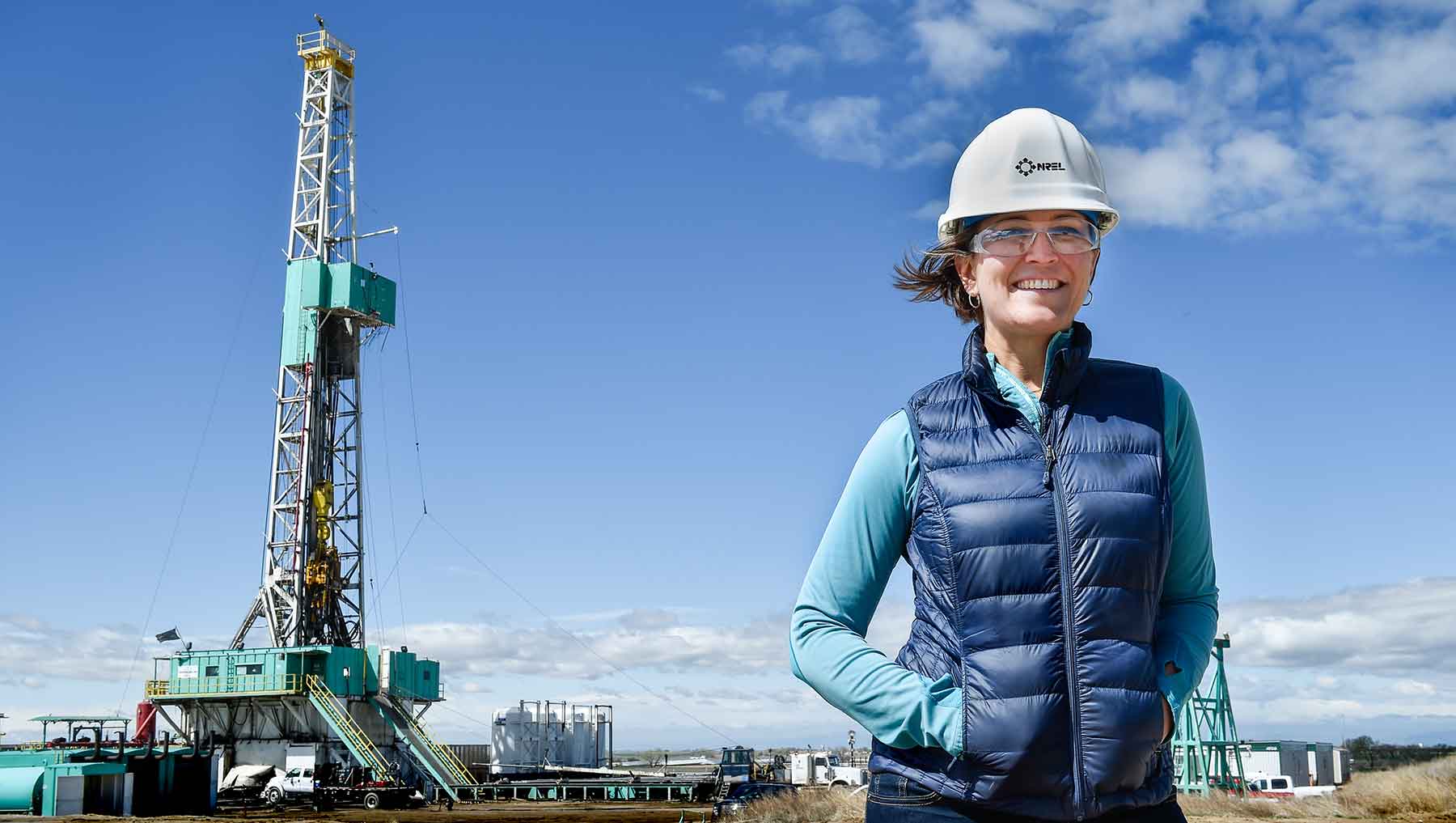 NREL researcher Katherine Young visits an IPT Energy Services oil and gas well site near Denver. NREL will be providing technical assistance to the BLM for its geothermal program, adapting knowledge, materials, and lessons learned from the agency’s oil and gas programs. Photo by Dennis Schroeder

Geothermal energy is there for the taking, provided you know where to look and want to invest the time and money to drill into the earth. The process can be complicated, but work being undertaken at the Energy Department's National Renewable Energy Laboratory (NREL) for the federal Bureau of Land Management (BLM) will make it less so.

That's important, because untapped geothermal energy stands ready to fill a need as states and the federal government push to generate more electricity from renewable sources. But adding geothermal-generated electricity to the grid can take years.

The BLM is tasked with the responsibility of deciding appropriate uses for 245 million acres of public lands, such as whether to allow the operation of geothermal plants. All states possess geothermal energy, but a dozen have been identified as the best potential sources for traditional hydrothermal power.

But where, under all that real estate, are the best places to drill?

"With solar and wind resources, it's easier to see if it's available," said Katherine Young, a geothermal energy engineer who works at NREL in the Technology Systems and Sustainability Analysis Group in the Strategic Energy Analysis Center. "It's easy to measure when the sun's shining and when the wind's blowing. With geothermal you have to spend a lot of money to confirm that resource is there."

Young and a team of NREL analysts worked with the BLM (and other federal and state agencies) several years ago when NREL develop an online resource called the Regulatory and Permitting Information Desktop (RAPID) Toolkit. The RAPID Toolkit allows agencies, industry, and developers to easily see the regulatory steps needed to develop renewable power projects—including those steps needed to tap into geothermal resources. Now the BLM has approached NREL with a half-dozen more tasks it wants NREL to assist with.

For the BLM, NREL will:

The scope of work could be expanded as additional funds become available. NREL also may be asked to analyze the possibility of coming up with a new classification of wells that could quicken the permitting process, and analyze the benefits and challenges of creating a centralized BLM geothermal permitting office in the West to handle geothermal development projects.

The BLM is managing 818 geothermal leases, with 59 already in production mode and an estimated capacity to produce 1,500 megawatts of energy. Another 1,250 megawatts of geothermal energy is in some stage of development.

Opening a Plant Can Take Years

As a baseload renewable—meaning it can produce electricity around the clock—geothermal has advantages over other types of renewable resources. It emits little to no greenhouse gases, for example, and has the smallest geographical footprint of any renewable. Tapping into the earth's geothermal energy requires exploratory drilling, going a mile or more down to find the reservoir of extremely hot water that can be used to generate electricity. Technology also exists to inject fluid into the earth, where it comes into contact with hot rocks and creates a geothermal reservoir.

The U.S. geothermal market is the largest in the world, based on installed capacity. However, only a small fraction of electricity in the United States is generated using geothermal plants—on the order of about 0.4%, whereas 67% comes from fossil fuels. The rate at which new utility-scale geothermal plants are able to open has been slow, largely because the process is long and complicated and requires a series of permits. From the initial steps of leasing land and drilling exploratory wells, the actual opening of a geothermal plant can take 5–10 years.

The BLM doesn't have any target for how much it would like to increase the use of geothermal resources. That's not what the agency does. "They're basically the property manager, issuing and overseeing leases to private companies," said Scott Haase, a senior engineer at NREL and the laboratory's liaison with the Department of the Interior, which oversees the BLM.

Like any good property manager, however, the BLM needs to know what it has available for lease. The agency took over management of geothermal resources on federal lands from the U.S. Geological Survey in the early 1980s, but "since then they haven't had a clear, consistent system for collecting data," Young said. "Some states used an internal reporting system and some states didn't."

Among the tasks BLM has asked NREL to accomplish is filling in the blanks. Two interns will spend 17 weeks this summer visiting BLM field offices to scour the records from 1983 on. The interns will examine reams of paper to discover such information as geothermal applications and whether a well was actually drilled, and follow up on-site on the status of a well.

Lorenzo Trimble, the BLM's geothermal program lead, said the goal of this task "is to make sure that data is consistent across all databases and to fill gaps in data to ensure information can be accessed more readily."

The White House in 2013 directed the federal government to more than double the percentage of its electricity from renewable sources by 2020, but didn't specify which sources of renewable energy must be increased to meet that target. At the request of the Energy Department's Geothermal Technologies Office, NREL investigated the feasibility of geothermal playing a significant role in that goal. Young and co-author Anna Wall reported the barriers now causing delays that, if addressed, could open the doors for geothermal development in the United States—increasing electricity from geothermal from the present 3.8 gigawatts to 7.6 gigawatts by 2020. The largest barriers identified by the study include financing, permitting, and power purchase agreements.  Additional work is underway this year to systematically identify and quantify barriers to geothermal deployment as part of the GTO's GeoVision Study.

California, which has a newly enacted law requiring investor-owned utilities to generate 50% of electricity from renewable resources by 2030, has the potential to get nearly a quarter of its power from geothermal. A program that dates to 1980 provides grants to developers looking to tap into California's geothermal reservoirs.

"If you find the resource, the grant turns into a low-interest loan," Young said. "In these cases, the state gets the money back, and the royalties and lease payments from development on federal lands in California go to fund further exploration."

The BLM maintains a vibrant program to deal with oil and gas leases on the public lands it oversees. The agency's most recent Public Lands Statistics report, which covers fiscal year 2014, noted 1,043 non-competitive leases had been signed during the year for oil and gas exploration efforts, compared to eight for geothermal activity.

In helping the BLM improve its efforts to better monitor interest in geothermal activity, Young and others at NREL will use resources already developed for the oil and gas industry.

"These projects will provide the BLM geothermal staff with technical data and analyses to help them develop programs and regulations that could help to reduce barriers to geothermal development on federal lands," Young said. 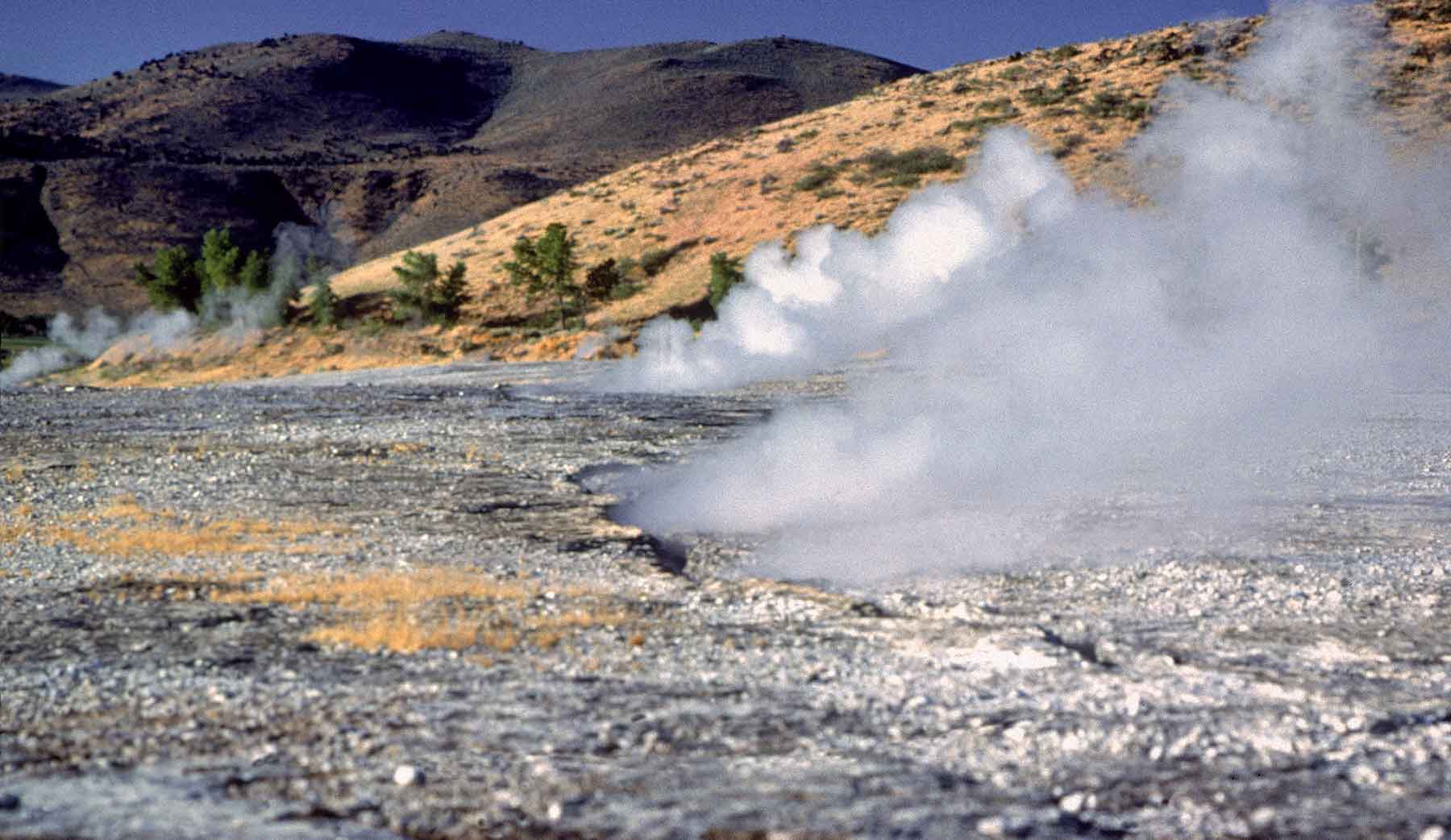 A view of the hot springs in the Steamboat Springs area of Nevada. The Steamboat Hills geothermal power plant is located in the area. Photo by the U.S. Department of Energy

While NREL has begun work on the first several tasks the BLM has asked for, the Colorado laboratory has already been looking into how to add more geothermal energy into the power mix.

NREL identified 11 areas in the country with the greatest potential for geothermal development. California was home to five of those areas. At the top of the list is the Salton Sea, at 365 square miles the largest lake in the state and one of the biggest geothermal anomalies in the United States. A report co-authored by Haase late last year estimated 1,350 megawatts of electricity could be generated from geothermal by 2030.

"The challenge with geothermal right now is it's a little more expensive to develop," Haase said. "You've got to drill wells. It's a corrosive environment. You're pulling up hot brine that's full of minerals. Especially in the Salton Sea area, it's a very corrosive brine so a lot of the piping and equipment needs to be titanium, so that makes it expensive."

Haase said that while utilities are required to use more renewable energy, there's nothing that says they must use a baseload resource. "Solar and natural gas have a lower cost than geothermal, but if you're trying to move away from gas as well, then you need something that's a baseload renewable like geothermal."

The value of baseload energy sources is high, according to Greg Brinkman. A member of the Energy Forecasting and Modeling Group in NREL's Strategic Energy Analysis Center, Brinkman recently completed an analysis detailing how California could reduce its carbon emissions from the state's electric power sector by 50%. The research looked at scenarios that would enable California to reach that target by 2030.

One scenario examined a diverse mix of sources, with 56% coming from renewables. Another also had 56% of renewables but a less diverse portfolio and a heavy reliance on solar power. Geothermal played a part in each scenario, but was most important to the scenario with the diverse portfolio; 9% of electricity would come from geothermal in that instance, compared to the current 5% and 3% under the solar-heavy proposal.

A key conclusion of the analysis was the less diverse portfolio could lead to higher costs partly because the electrical grid may not be flexible enough to deal with so much solar power if certain changes aren't made in the way the grid operates. That could lead to wasted energy and wasted money.

"Geothermal is a low-risk hedge against a less-flexible, less-diverse grid," Brinkman said.