The inaugural National Hydrogen and Fuel Cell Day, held in October, was too new for Hallmark to make a card for the occasion. But at the Energy Department's National Renewable Energy Laboratory (NREL), the day was cause for celebration.

NREL marked the day with the dedication of a new hydrogen fueling station, the first on the lab's Golden campus and a significant upgrade from the fueling station opened in 2009 at the National Wind Technology Center about 20 minutes away. The original station lacked the state-of-the-art features that come with the newly dedicated one, which can precool the hydrogen and fuel a vehicle in approximately 5 minutes.

"I'm kind of like a kid on Christmas Day here after a decade of waiting for this to happen," said Keith Wipke, manager of NREL's Fuel Cell and Hydrogen Technologies program. At NREL since 1993, Wipke has been passionate about having fuel cell electric vehicles on campus since the lab launched its wind-to-hydrogen demonstration project in 2006 and started making renewable hydrogen in significant quantities. Since NREL had begun producing hydrogen, Wipke pointed out, it only made sense that hydrogen-fueled cars and a fueling station become part of the laboratory's landscape.

"We're NREL," Wipke said. "We should be walking the talk and showing the vision of zero-carbon fuels and vehicles."

What NREL intends to do now is to pave the way for more hydrogen-powered cars to reach the street. The hydrogen test facility is designed to support research and development projects funded by the Energy Department's Fuel Cell Technologies Office in the Office of Energy Efficiency and Renewable Energy as well as industry, government, and university partners.

"Overall, fuel cell vehicles have been shown to be twice as efficient as gasoline-powered cars, and if the hydrogen that fuels those vehicles is produced with renewable energy, the result could be as much as a 90% reduction in greenhouse gas emissions," NREL Associate Laboratory Director Barb Goodman said at the dedication ceremony. "NREL started working on wind-to-hydrogen as a path for storing renewable electricity over a decade ago. Over this time we've seen the increasing importance of hydrogen as a vehicle transportation fuel."

Cars powered by hydrogen fuel cells have zero emissions, producing only water, and therefore don't add to the problem of greenhouse gases in the atmosphere. President Barack Obama has made curbing greenhouse gas emissions a priority, and has called on federal agencies to populate their fleets with more zero-emission vehicles.

Vehicles fueled by hydrogen are essentially operating on electricity, but use a fuel cell instead of a battery that must be plugged in to charge. Fueling a hydrogen vehicle can be done in minutes, and the cars have a range of about 300 miles. The challenge, though, is that fueling stations for these hydrogen cars are few and far between, and non-existent in most states. 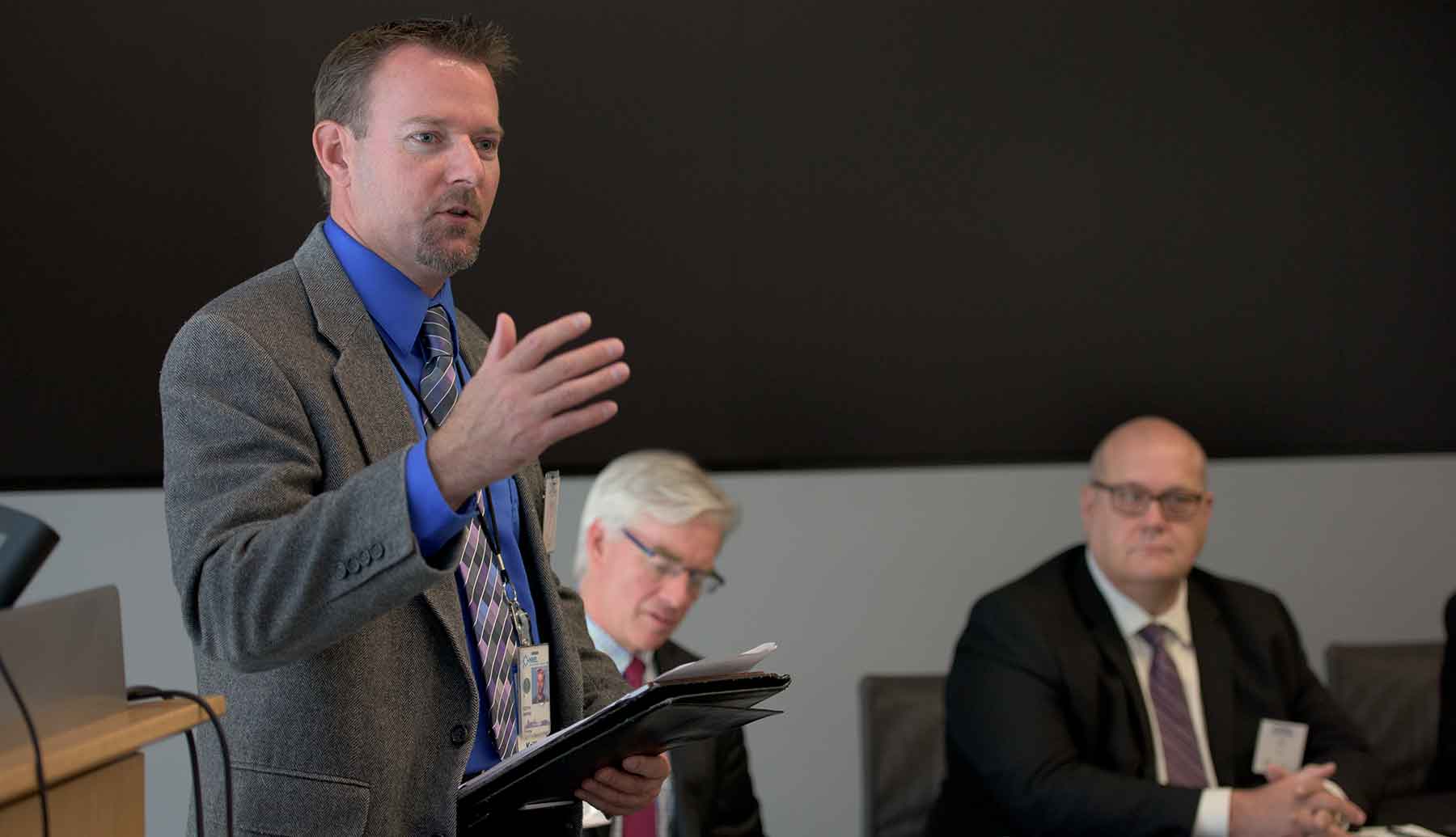 Goodman said car manufacturers want to see more hydrogen fueling stations open before they make the vehicles in larger quantities, while fuel providers want to see more vehicles made before they open additional stations. "As a result of that, several years ago we saw there was really a need to establish a research capability in hydrogen infrastructure that wasn't currently being met within the national laboratory system," she said. "We thought there were many technical challenges that we could address to have a positive impact on the upcoming rollout of stations as well as the future success of fuel cell electric vehicle introductions."

NREL's Energy Systems Integration Facility is home to the newly opened Hydrogen Infrastructure Testing and Research Facility (HITRF), where scientists will be able to produce hydrogen through electrolysis, test the durability of hoses carrying hydrogen to the vehicle, and improve renewable hydrogen production methods. The work at NREL directly supports H2USA, a public-private partnership launched by the Energy Department and industry to address the challenge of hydrogen infrastructure. NREL is an active partner in H2USA and is co-leading alongside Sandia National Laboratories the Hydrogen Fueling Infrastructure Research and Station Technology (H2FIRST) project.

One of the H2FIRST initiatives is to test the hydrogen station equipment performance (HyStEP) device for the Energy Department. Because hydrogen used for fuel is under pressure, the gas heats up as it flows into a vehicle's tank. The HyStEP device is intended to check the safety of fueling stations to ensure the amount of heat generated doesn't exceed safe limits, and the test device can be easily transported to a new location. The findings are shared with all car manufacturers, instead of each company having to separately certify a station. That's expected to shorten the time it takes for a station to be ready for customers from about six weeks to one.

"DOE is investing about $100 million per year in hydrogen and fuel cell research and development through the Office of Energy Efficiency and Renewable Energy to enable the widespread commercialization of fuel cell and hydrogen technologies," said Jim Alkire, a manager in the Energy Department's Fuel Cell Technologies Office. "Our research has helped reduce the high-volume cost of fuel cell systems by more than 50% since 2006 while achieving a more than five-fold reduction in the platinum content of fuel cells. In addition, the H2FIRST project aims to provide world-class technical facilities, like these at NREL, to demonstrate hydrogen fueling technologies and infrastructure in order to reduce the cost and time of new fueling station construction and improve the stations' availability and reliability."

After testing on the device is completed at NREL, HyStEP will be deployed in California, which has more fueling stations than any other state.

"NREL does have capabilities that in a lot of ways are ahead of the curve," said Tim McGuire, project manager for Mercedes-Benz Research and Development North America Inc. "As a car manufacturer, I want to concentrate on vehicle engineering and powertrain engineering, and have the ability to do that. But I don't necessarily want to test the hose on a hydrogen station. That's out of my domain."

McGuire spoke at a panel discussion at NREL before the dedication of the fueling station, alongside representatives of Toyota, Honda, and Hyundai. All of the companies have begun making hydrogen-fueled cars available for lease in the United States. Although they are competitors, all agreed on three points: They must reach beyond early adopters of the technology; more fueling stations are needed; and those stations have to replicate the experience drivers have long had with gas stations.

The Energy Department counts just a dozen hydrogen fueling stations that have opened to the public to date, and 10 of those are in California. Connecticut and South Carolina each have a single station. (The two at NREL's Colorado campuses are available only to researchers.) California has committed to spending at least $20 million a year until the state has a network of 100 hydrogen fueling stations.

California is already requiring car manufacturers to increase the number of zero-emission vehicles in an effort to improve air quality. Other states are following California's example—including New York, Massachusetts, and Maryland—but haven't come forward with significant funding to finance the construction of hydrogen fueling stations as California has.

"There are a lot of green advocates who want our cars but their location to a station is not convenient," Kevin Lee, fuel cell development engineer at Hyundai-Kia America Technical Center Inc., said during the panel discussion at NREL. "We do have a demand, but not enough stations."

Hydrogen-fueled cars from several manufacturers are lined up near the new hydrogen fueling station at NREL. Photo by Ellen Jaskol

Oak Ridge National Laboratory has estimated hydrogen-fueled vehicles will make up somewhere between 20% and 50% of the light-duty vehicles on U.S. roads by 2050. But several factors could push that forecast in a different direction, including the cost of both fuel cells and hydrogen, and how quickly the necessary infrastructure can be put into place.

For the rest of the nation? "Stations must come first," he said. "And this reality is the result of hard lessons learned in California. Once the state of California acknowledged that and dedicated a unique pot of funding toward hydrogen stations, automakers had the incentive to say now we can make our production plans, we can set specific dates for the delivery of the cars, and we can train dealers to service and sell the cars. Other states should study the California model carefully."

California drivers can choose from a variety of hydrogen-fueled cars, including the Toyota Mirai, the Honda FCX Clarity, the Hyundai Tucson Fuel Cell, and the Daimler B-Class F-CELL. The introduction of the vehicles to other states will come with the opening of fueling stations, automakers say.

Even as competitors, the automakers with hydrogen-fueled vehicles are open to cooperative efforts. Toyota, for instance, has decided to share about 5,600 patents on fuel-cell vehicles for free to accelerate the spread of the technology. "We strongly believe that to move a hydrogen economy, a hydrogen society, forward, we need everyone to succeed—including all our competitors," said Pisz.

Toyota announced in October it planned to eliminate the production of cars fueled by gasoline or diesel by 2050 in favor of putting more hybrids and fuel-cell vehicles on the road as a way to reduce greenhouse gases and combat global warming.

Learn more about NREL's research into hydrogen and fuel cells. 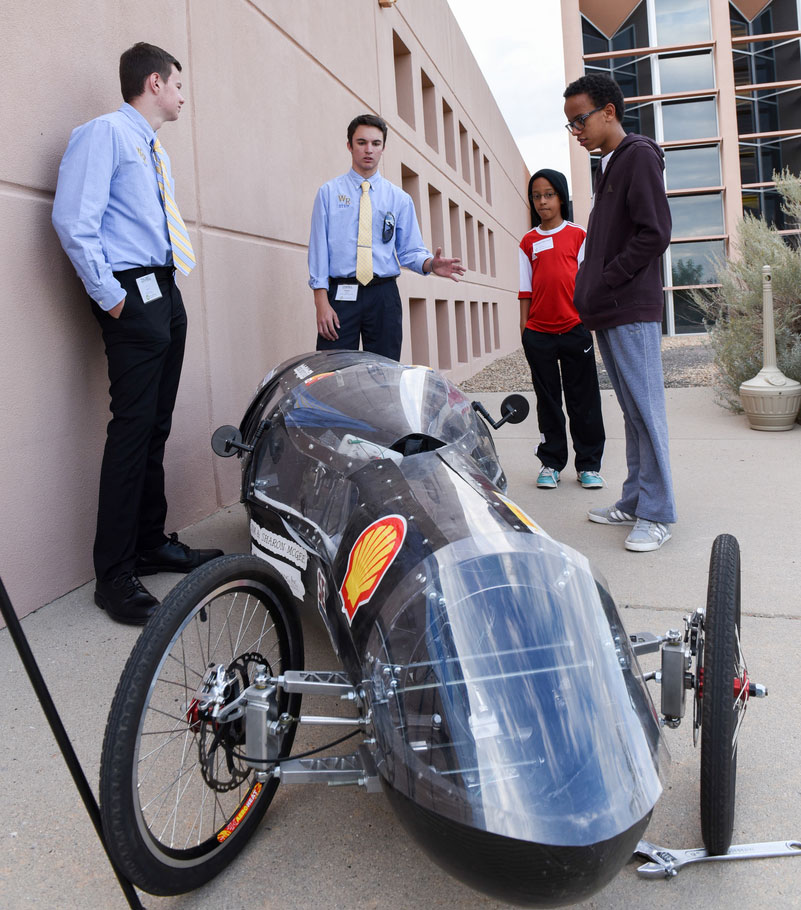 Some of the applause heard at the dedication of the new hydrogen fueling station at NREL on October 8 was intended for a group of high school students and their teachers.

Earlier this year, the students from Wheat Ridge High School made their initial foray into designing and building a prototype hydrogen-fueled vehicle for the Shell Eco-Marathon Americas competition, and walked away winners in their division.

The competition is a challenge for students in high school or college to design an energy-efficient vehicle. After the success of the 16-member team from Wheat Ridge, the school is preparing for next year's Shell Eco-Marathon.

Chuck Sprague, who teaches engineering at Wheat Ridge, said 41 students signed up for this year's class and are readying two cars for the upcoming contest, set for April in Detroit. About half of the students will come up with a vehicle to compete in the prototype division. This year's entry, nicknamed "The Beast," was a low-slung lightweight vehicle with three bicycle tires and barely room for the driver. The rest will work on a car in the urban concept division, which requires vehicles to be closer to street legal, with headlights, windshield wipers, blinkers, and trunk space.

Competitors can choose from seven different energy sources to power their vehicles, which are judged by how far they can go. The Wheat Ridge students will use hydrogen fuel cells in both of their vehicles.

"We've heard about hydrogen but didn't know much about it," said Andrew Miller, a senior and returning competitor. "Working on this project made it more realistic for us."

"One of the big appeals is it's nice to show the students you don't have to fill up with gas and everything runs on gas," Sprague said, pointing to the benefits of using hydrogen. "It's clean. It's efficient."