NREL researchers, from left, Andy Walker, a principal engineer in the Integrated Applications Center's Engineering and Modeling Group; Kate Anderson, manager of the Engineering and Modeling Group; and Marguerite Kelly, manager of the Market Partnerships and Tools Group, are working to help federal agencies become more energy efficient as part of a White House executive order. Photo by Dennis Schroeder

When it comes to energy use, what the federal government wants is more of less. That means fewer greenhouse gases, fewer buildings powered solely by electricity generated from fossil fuels, and fewer gas-guzzling fleets on the road.

An executive order issued by the White House in March puts greater emphasis on work done at the Energy Department's National Renewable Energy Laboratory (NREL) to help government agencies meet their goals. NREL has long been a resource for federal agencies on energy efficiency efforts and renewable energy technology. The newest executive order calls for tougher goals and spurs agencies to do more than what they've done already.

Under a goal established by Executive Order 13693, titled "Planning for Federal Sustainability in the Next Decade," federal agencies have until 2025 to get at least 30% of their electricity via renewable sources. That trumps the 20% target established in a 2009 presidential memorandum.

The new executive order requires that agencies do the following by 2025: 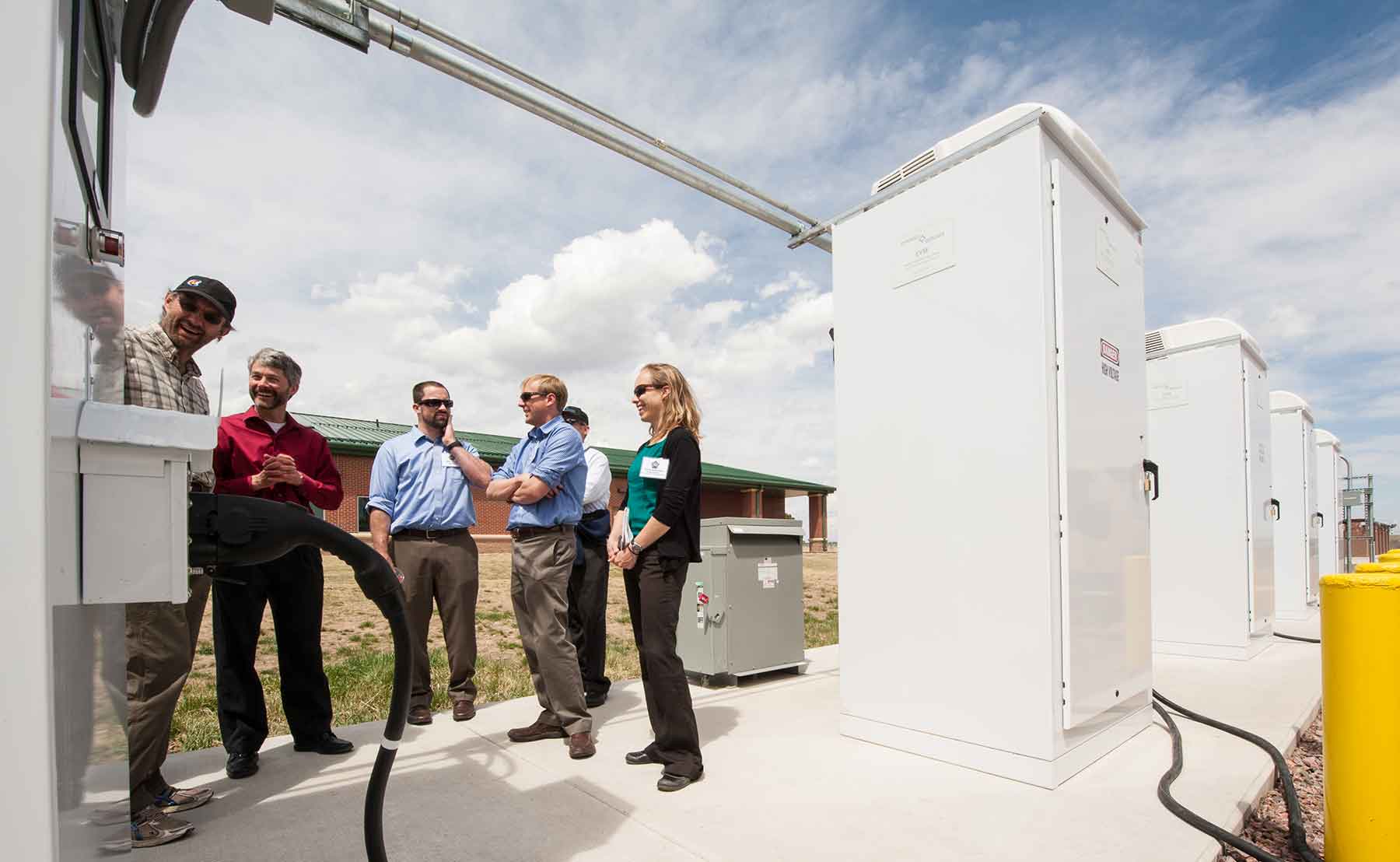 NREL researchers including Kate Anderson, right, tour the Electrification Pilot Site at Fort Carson Army Base in Colorado Springs. Anderson's group recently completed a Federal Energy Management Program-backed analysis of the 400 sites that represent a combined 75% of the federal government's energy use.
Photo by Dennis Schroeder

Agencies Work to Get Their Numbers Up

Overall, 8.8% of electricity used by the federal government comes from renewable sources, according to the Energy Department. On a per-agency basis, this amount fluctuates wildly, from as little as 0.2% at the Postal Service to as much as 105% at the Environmental Protection Agency.

"There are some agencies that do need to catch up," Tim Unruh, director of the Energy Department's Federal Energy Management Program (FEMP), said during a panel discussion at the GreenGov Symposium in Washington. "Some of them are very large."

Some agencies that haven't met their goals are doing large projects and have programs in place to procure green power. But the ratio of renewable energy needed to the amount of electricity generated by fossil fuels is so large that a significant amount of work remains.

Unruh suggested that agencies that need to come closer to the 30% target formulate a plan to reach the goal, and pointed to the REopt tool developed at NREL as a starting point.

REopt—short for Renewable Energy Optimization—is an energy-planning platform that shows agencies at which renewable energy projects make the most economic or technical sense for a building or site, and helps them prioritize how to meet energy targets. Along with REopt, NREL staffers also teach facility managers how to conduct their own energy audits, because making a building more energy efficient is a must.

FEMP provides project development assistance to allow NREL staff to write specifications for a request for proposals (RFP), evaluate bids, and, once a renewable energy project is installed, ensure it's operating properly.

"It's this narrowing pipeline," said Kate Anderson, manager of NREL's Integrated Applications Center's (IAC) Engineering and Modeling Group. Her group earlier this year completed a FEMP-backed analysis of the 400 sites that represent a combined 75% of the federal government's energy use. From that initial study, Anderson's group will embark on a deeper analysis of energy use at three agencies with large campuses: the Department of Veterans Affairs, the General Services Administration (GSA), and the Air Force.

How well federal agencies are progressing toward their goals is measured and reported annually to the Office of Management and Budget (OMB). The most recent report, covering fiscal year 2013, found a dozen agencies had trimmed their energy use by at least 24%, as measured by a reduction in Btu per gross square foot. Overall, the government's energy use was down about 20% from the 2003 benchmark.

Anderson said every agency wants to reach the goals, "but they also recognize that it has to be done cost effectively. It can't cost them any more than it would to purchase utility power. In some cases they can't quite get to the goal given today's utility rates and today's renewable energy prices. In those cases, they look at a 10-year or 20-year plan when utility prices might be higher or renewable prices might be lower."

The Navy, which intended to have half of its onshore energy needs met by alternative sources by 2020, moved up its target and will procure or produce a gigawatt of renewable energy by the end of this year. The Navy last year created the Renewable Energy Program Office (REPO) to identify cost-effective renewable energy offices. Two NREL employees—Mike Callahan and Mike Hillesheim—have been embedded in two REPO offices since October.

With NREL's assistance, the Department of the Interior (DOI)—parent to the National Park Service—has managed to reduce the amount of energy it uses by about 34% from 10 years earlier. DOI also has increased its use of renewable energy sources by 10.1% since 2008.

"The Park Service has many remote locations that are burning diesel fuel for power," said Scott Haase, NREL's Lab Program Manager for DOI. "It's obviously not ideal when you're in a pristine environment to have diesel running in the background. We're trying to identify ways to mix more solar into those systems."

Although the addition of solar panels is part of what NREL recommended for the National Park Service, that's not what the laboratory automatically suggests for any site.

Using energy more efficiently can be as simple as replacing incandescent light bulbs with light-emitting diodes (LEDs). Tapping into renewable energy is a bit more complicated, but the use of REopt suggests which method would be the best for a particular site.

"We try very hard to be technologically agnostic," said Marguerite Kelly, manager of the IAC's Market Partnerships and Tools Group. "In other words, not to tell an agency it should use wind and not solar. We try to say, ‘OK, here's how you make that decision. Here are some factors you should consider.'"

Executive Order 13693 also mandates that all new federal buildings with planning beginning in 2020 or later be designed to reach net-zero status by 2030. A net-zero building produces as much energy as it uses over the course of a year.

"It's easiest to design aggressive energy-efficiency features into a new structure," Kelly said. "It's much easier to do that than to retrofit an old structure." But with better natural lighting and the addition of solar panels, she said: "You can usually cut the energy use of a building substantially."

NREL has already helped divisions within the DOD on multiple projects, including developing an independent electrical generation and distribution system—called a microgrid—for the Marine Corps Air Station (MCAS) Miramar in San Diego, California.

"A lot of the DOD's interest in renewables is tied to energy security," said Haase. "They'd like their projects to have some ability to provide power generation if the grid goes down."

Up on the Roof in Washington

An influx of additional funds didn't accompany the executive order. Instead, agencies can tap into private-sector financing options such as power purchase agreements (PPAs). A PPA puts the financial onus onto the developer of a solar project, for example. But after paying the upfront cost of the project, the developer reaps the benefits from any tax rebates or incentives offered by state or local governments. The federal agency is able to buy power at a cost lower than what a utility would charge.

That's the idea behind the Capital Solar Challenge, said Andy Walker, a principal engineer who helped develop REopt. He and seven others from NREL went to Washington last year to look into the feasibility of installing solar panels on 44 federal buildings.

The technoeconomic analysis revealed adding the panels makes financial sense, but not on every building.

Of the 44 buildings studied, only 18 remain under consideration for solar panels. The others had to be excluded because of certain factors, such as the panels would be visible from the street (this is unallowable in the D.C. area) or lacked a large enough area for the panels.

The GSA issued an RFP that asks a developer to sign a PPA to install the solar panels on the remaining buildings, including such notable structures as the Museum of American History and the Hubert H. Humphrey Building. The Capital Solar Challenge comes after a push by the District for utilities to generate more electricity from renewable sources. The target is 20% by 2020, and 2.5% must come via solar by 2023.

The GSA's contract would cover a 20-year span, with a base period of 10 years and an option for another 10 years. In addition to the sale of renewable energy credits (RECs), additional incentives will be paid by the District of Columbia Sustainable Energy Utility (SEU), which is offering a maximum of $600,000.

The estimated cost of installing the solar panels is around $10 million, and the federal government is looking to save $480,000 on energy costs during the first year. A favorable rate of return for investors is contingent on federal tax credits, REC sales, and the SEU incentive. NREL will help evaluate responses to the RFP, and then hopes to review designs after a company is selected. Walker said NREL also would like to be involved in measuring how much energy the solar systems generate, once installed, versus a prediction of how much they should have produced under the conditions.

Walker's work in Washington gave him a bird's-eye view on the goings-on in the capital. From the roof of the five-story Treasury Building, he could see the White House lawn directly to the west. "When I was up on the Treasury roof, Michelle Obama was setting up for pumpkin carving on the lawn," Walker said.

The White House, by the way, isn't part of the Capital Solar Challenge aggregated procurement. Solar panels were already installed atop the White House last year. An early White House effort toward renewable energy—solar water heating panels installed during Jimmy Carter's administration—has become one for the history books. One of those panels now rests in the Smithsonian National Museum of American History, which is part of the Capital Solar Challenge.