No one at the Energy Department's National Renewable Energy Laboratory (NREL) has seen more of the National Science Bowl than Linda Lung has.

Manager of NREL's Workforce Development and Education Programs, Lung was recognized by the Energy Department at the conclusion of the National Science Bowl in Washington, D.C., earlier this month for her involvement with the Department-backed competition since its debut 25 years ago. Previously manager of education programs at the Rocky Flats Plant, the first facility to sponsor the regional Colorado Science Bowl, Lung brought the Science Bowl with her when she moved to NREL 23 years ago.

"It is one of our portfolio programs," she said.

The road to the National Science Bowl begins in the classroom. Schools from across the country are invited to form teams of four or five players, and then compete for the privilege of representing their state in D.C. at the national competition. Students who are home-schooled also are eligible to start a team. This year's Colorado High School Science Bowl originally was to be between 48 teams in February, but a snowstorm forced the cancellation of the event. The rescheduled competition was limited to 16 teams, and was held at NREL for the first time.

The competition requires students to buzz in and supply lightning-fast answers to questions in a variety of sciences, including math, chemistry, physics, and biology. Here's one sample question: Using g rounded to the first decimal place, how much does an 80-kilogram person weigh on Earth, giving your answer in proper SI units? (The answer, if you didn't already know, is 784 newtons.)

"It's amazing what these kids know," said Lung, who serves on the planning committee for the National Science Bowl. "Some of these kids are able to complete math calculations quickly in their head. They don't need to write anything down. They are human computers."

The five-member team from Ridgeview Classical Schools in Fort Collins won the Colorado competition, clearing the way for a trip to D.C. Ridgeview, a K-12 charter school with a graduating class of about 40, has sent a team to the National Science Bowl for five of the last 10 years. This year, Ridgeview returned from the nation's capital with a record of 4-3 in the round-robin tournament.

Students from Mira Loma High School in Sacramento, California, emerged victorious at the end of the National Science Bowl. Mira Loma and Thomas Jefferson High School for Science and Technology in Alexandria, Virginia, have traded the national winning title for the last 10 years.

Ridgeview's team at the National Science Bowl was composed of seniors Mohini Tangri, Dennis Bolshakov, and Arvind Chandramouli, and juniors Blake Salvador and Colin Tweedy. Tangri was the captain and the only woman on the team. 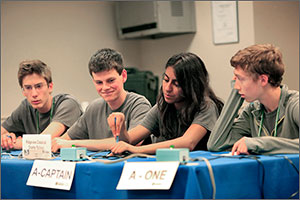 Paula Petterson, Ridgeview's Science Bowl coach since the school first formed a team, said she hoped students see the experience as "an opportunity to have fun doing something that is science-related. It would be nice if all our Science Bowl team members would go into science. That's not necessarily the case. It would be nice if science was their number-one priority. We're a small classical school, so we have students here who have strong interest in the humanities as well."

Petterson teaches Advanced Placement (AP) Biology and serves as the college adviser. Her co-coach is David Morse, who teaches chemistry and AP Physics.

The Ridgeview Science Bowl team operates as a club, open to anyone in 9th through 12th grade.

"Our practices are typically mock rounds where we just go through lots and lots of questions so students get practice with the buzzers and familiarity with the types of questions," Petterson said. "Much of the other preparation they do independently, or they remember things from their classes."

With just four team members able to play at a time—the fifth serves as an alternate, ready to step in at the allowed halfway point of a round—it's difficult to field a team of students who specialize across so many areas of the sciences.

"It helps to have some specialization, but at the same time there are more categories than there can be team members," Petterson said. "As a result, we generally have students who have a broad range in terms of their background. Then they may have certain areas that are greater strengths for them. It is generally important to have at least a couple of students who are very good and quick at calculations. That's very important at the national level. It's amazing how quickly students can do calculations in their heads." 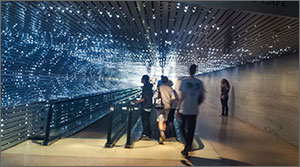 The Ridgeview students took time to see the sights of Washington, D.C., while visiting the nation’s capital to compete in the 2015 National Science Bowl.
Photo by Mohini Tangri, Ridgeview Classical Schools

Opening the Door to Workforce Development

"Our students were pleased when the other teams were asked what colleges they were attending," Petterson said. "They were attending Ivy League schools or MIT, University of Chicago, Harvard, Princeton—those types of schools. While some of our students have applied to those schools, we haven't had very many get into them. Our students felt very good about beating some of the teams where they had a preponderance of students going to those schools."

"I met a lot of very ambitious and intelligent students who had already done some very impressive things and accomplished quite a lot," said Chandramouli, who has an interest in astronomy and his eyes on a career at NASA. "Their success and their dedication to science has inspired me in a sense because they were able to accomplish such great things at such a young age. One thing I definitely learned from this experience is that hard work and dedication lead to success. If the other competitors could do such great things, then I can, too."

Although the National Science Bowl requires students to have a wide breadth and depth of knowledge, the purpose of the competition isn't education.

"We are not in the business of education," Lung said. "That's the job of the Department of Education. But all labs are involved in workforce development."

Ideally, high school students immersed in the sciences required to compete at the National Science Bowl would move toward a career in a science, technology, engineering, and math (STEM)-related field. Lung said students who compete in the Science Bowl typically have enjoyed academic successes in high school.

"I've seen Science Bowl alumni go on to do some fabulous stuff," she said.

Lung counts Jeremiah Way among the success stories. A Coloradan who went to the 1998 National Science Bowl with his Fort Collins High School team, Way was included in this year's program alongside a select group of alumni from past competitions. After high school, Way earned bachelor's and master's degrees in chemical engineering from Colorado State University. He's now a senior engineer at Hach Company in Loveland, Colorado.