NREL Biochemical Conversion Manager Rick Elander toured NREL's Biorefinery Research Facility last year with Reuben Sarkar, a deputy assistant secretary for the Energy Department, who oversees sustainable transportation. Here, they are examining a bin filled with cellulosic biomass, the raw material of a biofuel that would be cleaner than gasoline.
Photo by Dennis Schroeder

The Energy Department's National Renewable Energy Laboratory (NREL) played crucial roles in developing the technology that has led companies such as DuPont, POET, and Abengoa to open commercial-scale facilities to turn biomass into clean transportation fuels.

All three companies turned to NREL for the lab's biofuels expertise—POET for pretreatment, Abengoa for compositional analysis, and DuPont for several crucial steps in the process.

Cellulosic Ethanol Conversion Could Be Boon to Economy

Cellulosic ethanol—made from material such as agricultural waste and forest residues—holds great promise for reducing our reliance on foreign oil and securing our energy independence. It doesn't use the part of the plant that could otherwise be used to feed humans or livestock. It uses everything else, the 90% of the mass that farmers have typically thrown away, or let lie in the field where it can produce methane, an especially powerful greenhouse gas.  With corn, the non-food part of the plant is called stover, a type of lignocellulosic biomass. Unfortunately for the biofuels industry, these types of biomass have proven tricky to break down into sugars for the biofuels process.

A close, collaborative partnership between DuPont and NREL led to the transfer of two technology platforms that greatly improve the processing of corn stover for biofuels. DuPont's large-scale manufacturing plant will employ hundreds of full-time, part-time, and contract employees and buy the leftover parts of the corn plant from some 500 nearby farmers.

The story begins in 1995 with a Science Magazine article authored by NREL researchers on the surprising potential of the bacterium Zymomonas mobilis as a catalyst in the fermentation process for breaking down sugar for biofuels. NREL researchers found that when they introduced the proper genes into Z. mobilis bacteria, a broader spectrum of sugars was digested. While typical yeast or native Z. mobilis only uses the six-carbon (C6) sugar glucose, the engineered Z. mobilis can now consume five-carbon C5 (derived from hemicellulose) sugars such as xylose, and converts them to ethanol.  Per fixed cell mass and time, Z. mobilis, or Zymo, can produce significantly more ethanol than can yeast.

DuPont and NREL Formed Partnership in 2002 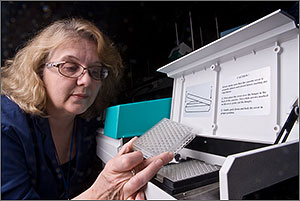 NREL researcher Mary Ann Franden examines a sample tray used in an instrument to monitor the growth of a microorganism.
Photo by Pat Corkery

The collaboration between NREL and DuPont got its start in 2002 when the Energy Department's Bioenergy Technologies Office issued a funding opportunity announcement asking that companies collaborate with national laboratories to improve the process of making cellulosic ethanol.

DuPont was intrigued by NREL's improvements to Z. mobilis, and its scientists knew that NREL was a leader in pretreatment technology development. They made contact, and NREL put together a proposal for the two teams to work together on the entire process development program, which included research activity on pretreating cellulosic material, enzymatic hydrolysis of the pretreated material, and fermentation of the sugars released from the hydrolysis step. The joint proposal won a four-year cost-shared award.

DuPont wanted to develop a novel pretreatment process using ammonia, in a more cost-effective and less harsh form than had been used previously. The two teams—one from a 200-year-old Fortune 500 company, the other from a national lab with a mission to help push technology to the marketplace—got to work.

In collaboration with DuPont engineers, NREL retrofitted and remodeled small reactors to test the effectiveness and safety of the new ammonia-based approach to pretreatment. "DuPont felt that if they could mesh up a milder ammonia pretreatment process with the right enzymes, there was promise," said NREL Biochemical Conversion Manager Rick Elander. "There were steep challenges, such as how to mesh an unfamiliar pretreatment approach with the proper enzyme system without adversely affecting the next step in the process."

Meanwhile, NREL's molecular microbiologists shared with the DuPont team their discoveries with Z. mobilis bacteria.  Together the team further engineered and adapted the Zymo bacterium to conditions most relevant to DuPont's processes.

"This was a true collaboration," said NREL microbiologist Mary Ann Franden, who demonstrated for DuPont the key characteristics of the Zymo organism at that time.

NREL also did the economic modeling for the DuPont approach, modeling the expected cost of the feedstock and the process to help the company understand what they needed to do with the technology to deliver a profitable program. "When companies like DuPont sink millions of dollars into a project, it is important they get it right the first time," Elander said. Questions needed to be answered: What is the cost of pretreatment? What is the cost of shipping the feedstock? How does the fuel need to be priced to break even or earn money?

The exchange of information led to improved strains of the Zymo bacterium, and those improvements became a part of the intellectual property portfolio owned and licensed by DuPont.

The technology developed in the NREL-DuPont collaboration includes two components:

"We were joined at the hip," Elander said. "The DuPont people were here for weeks and months on end. They learned a lot by being that actively engaged."

"We had bi-weekly conference calls, we exchanged materials back and forth—it was a real collaboration as well as some healthy competition," NREL Senior Scientist Yat-Chen Chou said.

"We were moving very fast; DuPont would have a new idea, we would come up with an improvement, or vice versa," NREL Senior Scientist Min Zhang said. Work continued after regular business hours, and weekends were often short.

Learning from Each Other 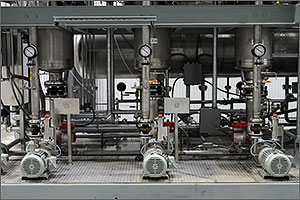 The collaboration between NREL and DuPont helped lead to DuPont’s decision to open one of the world’s first pilot-scale commercial cellulosic ethanol plants in Vonore, Tennessee, which began operating in late 2009. The plant uses a unique biomass pretreatment process developed by DuPont and NREL.
Photo by Chad Greene/ChadCRG Images

The style of work evolved over time, from brainstorming and trying everything that might work to a much more focused approach. "That was probably good—loosey-goosey at the beginning, then very goal-oriented," Elander said. "By the second year we were all marching to milestones." NREL used a random evolutionary approach while DuPont focused on molecular biology.

NREL ran four fermenters, each over many months, with different conditions to see how they could evolve the Zymo strains to different combinations of cellulose and xylose. "That was critical," Elander said. "We learned a lot from DuPont that is allowing us to improve our strains."

While part of NREL's mission is to keep an eye on the long-term goals of basic science and applied research, it's not what is foremost on the minds of private companies.

"These companies want to get to the point real fast," Elander said. "Compared to the broader things we do for the Energy Department, working with an industry partner, you learn what problems are important to them. They don't have the luxury of investigating every little nuance along the way. We were able to help get them there.

"We got a lot out of the experience as well," Elander added, noting that it helped sharpen NREL's focus in subsequent cooperative research and development agreements (CRADAs) with private companies. NREL helps steer promising technologies to the marketplace, but the lab's role always ends prior to commercialization. NREL uses a CRADA when a partner and the lab intend to collaborate on a project. The agreement protects a company's and NREL's existing intellectual property, and allows the company to negotiate for an exclusive field-of-use license to subject inventions that arise during the CRADA's execution.

The CRADA between DuPont and NREL culminated in a series of small pilot-scale runs in NREL's pilot plant facilities. The pretreatment, enzymatic hydrolysis, and fermentation technologies were operated in an integrated manner that mimics a full-scale process. The results from this pilot-scale demonstration were successful, so less than two years later, DuPont opened a 74,000-square-foot pilot-scale plant in Vonore, Tennessee, dedicated to this process. The Tennessee venture performed so well that DuPont moved ahead with the full-scale manufacturing plant in Iowa.

"They had a business case to meet, and they met it," Elander said.

The CRADA with NREL and the technology transfer enabled DuPont to put together a package that includes all the steps of turning biomass into ethanol—pretreatment, enzymatic hydrolysis, and fermentation. The NREL team had the satisfaction of knowing that the process they helped pioneer had proven successful enough for DuPont to build a commercial scale facility.

"DuPont is leading the way in the commercialization of cellulosic ethanol," states Jan Koninckx, Director DuPont Biofuels. "The work conducted with NREL has provided foundational science, and today, DuPont offers an integrated and demonstrated farm-to-fuel cellulosic ethanol solution that meets the demands of renewable fuel and chemical producers for a cost effective, sustainable, scalable technology."

Developing a process that can pretreat biomass inexpensively and use all of the sugars efficiently is the Holy Grail of cellulosic ethanol. And that is precisely what occurred—and what was licensed—in the technology transfer from NREL to DuPont, said Eric Payne, senior licensing executive at NREL. "To go from the basic science to the technology to moving it to the marketplace, this has been a most satisfying process for us."

"Many of us have been working on cellulosic conversion for 20, 30 years," Elander said. "These plants are now being built. It's no longer five years off anymore. That had been the joke—it's always five years away. Well, it's not five years away anymore."