NREL Senior Scientist Roman Brunecky examines the molecular weight of the enzyme CelA on a gel in the Protein Chemistry Lab in the Field Test Laboratory Building on NREL's Golden, Colorado, campus.
Photo by Dennis Schroeder

Scientists at the Energy Department's National Renewable Energy Laboratory (NREL) have developed an enzyme that could change the economics of biofuel conversion by converting biomass to sugars up to 14 times faster and much cheaper than competing catalysts in enzyme cocktails today.

This enzyme is called CelA, a cellulase from the bacterium Caldicellulosiruptor bescii, and the fact that it's from a bacterium, and not a fungus, is just one reason why it is such a potential game-changer. Here are some others:

In one scenario, the best commercially used enzyme converted sugars at a 30% extent in seven days. CelA converted to double that extent. And while it took the alternative enzyme seven days to achieve that conversion, CelA, with a small boost from an extra beta glucosidase, achieved double in just about two days.

"If you can achieve in one day what typically takes seven, you are saving the better part of a week of processing," NREL Senior Scientist Roman Brunecky said. "And that can have a huge economic impact."

Just CelA alone is four to five times faster at breaking down sugars than the enzymes in today's cocktails. A more typical usage would be CelA combined with a beta glucosidase—the improvement that makes it 14 times faster.

The remarkable discovery comes at a time when the dogma in the industry was that the important discoveries already had been made: that another cellulase, Cel7A, was the key enzyme to be the backbone of all the cocktails. NREL's discovery not only reveals that there is an intriguing enzyme that can work several times faster, but it is also a reminder that nature still has secrets to uncover.

If the enzyme continues to perform well in larger tests, it could help drive down the price of converting cellulose and, with it, the price of everything from jet fuel to ethanol, butanol, drop-in fuels, and numerous chemicals.

NREL has filed for patent protection on the enzyme formulation and the improvements made to the unusual enzyme. 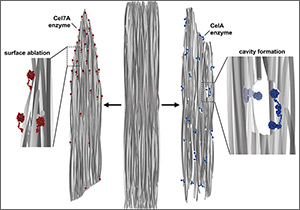 Lignocellulosic biomass is the most plentiful and sustainable resource on Earth, largely made up of plant residuals that would otherwise go unused and left to decay. Using this biomass as a source of alternative fuels can help offset the world's dependence on fossil fuels and reduce greenhouse gas emissions. Using electron microscopy, the NREL researchers and their partners at the University of Georgia found that CelA not only ablates the cell wall of lignocellulosic biomass, but excavates cavities into the surface. CelA also worked faster on raw biomass than it did on biomass pre-treated with chemicals.

The discovery was the unexpected result of very thorough imaging and analysis by Bryon Donohoe of NREL's Biomass Surface Characterization Laboratory research team.

NREL researchers put CelA to the test and found that it produced more sugars than the most abundant cellulase in the leading commercial mixtures, Cel7A, when acting on Avicel, which is an industry standard to test cellulose degradation. A paper on the finding, "Revealing Nature's Cellulase Diversity: The Digestion Mechanism of Caldicellulosiruptor bescii CelA," appears in a recent issue of the journal Science.

The researchers found that the size of the holes in the plant walls was about the same size as the enzymes themselves. The inability of the enzyme to digest a space on the surface that is any bigger than its own size is probably the reason its digs holes deep into the stuff it is digesting. Scraping and digging gets the job done faster than just employing a single approach.

If CelA proves reliable as it is scaled up to manufacturing levels, it could mean lower fuel prices in 2022, when the Energy Independence and Security Act mandates annual production of 36 billion gallons of fuel made from the non-food part of plants.

Biomass is composed of three types of polymers that are intermeshed to form plant cell walls: cellulose, xylan, and lignin. Each of the three polymers typically requires several types of enzymes to deconstruct them to soluble species that can then be upgraded to ethanol, drop-in fuels, or chemicals.

But CelA offered another surprise: an appetite for not just cellulose but xylan, too. Xylan, which wraps around the cellulose fiber, can contribute significantly to the manufacture of biofuels if its stubborn sugars can be released. "That was absolutely a novel feature that no one knew about—CelA's ability to break down xylan," Brunecky said. 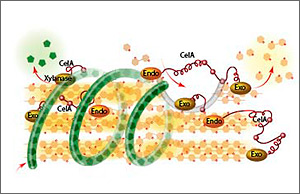 CelA is a potential game-changer because it combines the activities of all four of the major enzyme types, as illustrated here.
Image by Alex Berlin, Novozymes, Inc.

C. bescii, producer of the remarkable CelA enzyme, was first discovered in warm-water pools in the Valley of Geysers on Russia's Kamchatka Peninsula in the 1990s. Russian scientists found the enzyme somewhat promising, but it wasn't until the NREL researchers conducted a thorough analysis and added improvements that its remarkable potential was realized.

NREL found some surprising properties. For example, even though CelA contains naturally occurring endoglucanase, the researchers found that adding more of the substance greatly accelerated the rate at which it broke down sugars.

"You'd think that nature would already have evolved an optimal mix in a single enzyme," said Brunecky, lead author of the Science paper. "You expect to see maybe a 20% to 30% improvement when you add a beta glucosidase to a cocktail—not the doubling or tripling of the rate of conversion and the increase of rates by a factor of 10 that we got with CelA. Nobody expected the improvement to be this high."

"The bacteria that secrete the promising CelA thrive in temperatures of 80°C to 90°C, close to boiling," said NREL Senior Scientist Yannick Bomble, who is the senior author of the Science paper. "That's an advantage because the early pre-treatment process requires temperatures greater than 100°C to remove unwanted materials. The next step requires cooling the temperature to the preferred range of the enzyme. In the case of CelA, the temperature doesn't have to drop as much—another way to save money."

In a letter of comment in the same issue of Science, Alex Berlin of biotechnology company Novozymes noted that CelA's ability to operate at high temperatures "would be seen by many in the biomass biorefinery industry as an advantage" because it "dramatically reduces the chances of bacterial contamination" while lowering the viscosity of the mixtures.

The BioEnergy Science Center, one of three Bioenergy Research Centers supported by the Office of Biological and Environmental Research in the Energy Department's Office of Science, provided the funding for the research. Lead author of the paper was NREL scientist Roman Brunecky. Others from NREL include Markus Alahuhta, Bryon S. Donohoe, Michael F. Crowley, Michael G. Resch, Vladimir V. Lunin, Michael E. Himmel, and corresponding author Yannick J. Bomble. Co-authors from the University of Georgia include Irina A. Kataeva, Sung-Jae Yang, and Michael W.W. Adams. 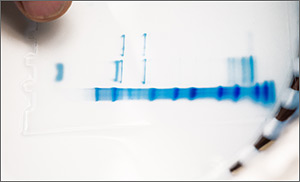 A blue-stained image of protein separated from a CelA enzyme gives scientists a better idea of the enzyme's properties and potential.
Photo by Dennis Schroeder

Before the discovery of CelA's remarkable properties, scientists knew of two ways that enzymes go about degrading plant cell walls. One is to secrete free, complementary enzymes that hydrolyze cellulose, and the other is to use large enzymatic assemblies, called cellulosomes, to assemble scaffolds to attack the walls. The new finding indicates that there is a third way.

"CelA is the most efficient single cellulase we've ever studied, by a large margin," Bomble said. "It is an amazingly complex enzyme, combining two catalytic domains with three binding modules. The fact that it has two complementary catalytic domains working in concert most likely makes it such a good cellulose degrader."

The NREL researchers led by Michael Himmel aren't resting on their laurels, or their patents. They're examining the other enzymes secreted by the organism. They're also using what they've learned from CelA to help improve cellulase enzymes that are more compatible with the enzyme formulations used today.

The next step toward using CelA at commercial scale is to express large amounts of the enzyme in existing production systems, and to boost enzyme yields from the native organism, C. bescii. Most of the large enzyme companies have the expertise to do that, so commercialization looks like a good bet.

"We are learning a lot about the evolution of these cellulases, how they can thrive in extreme environments, and how they operate on biomass," Brunecky said.

"This discovery could reshape the landscape of commercial cellulase cocktail design," said Paul Gilna, director of the BioEnergy Science Center.