In the National Renewable Energy Laboratory's (NREL's) world-class laboratories, scientists characterize the performance and durability of optical materials and of heat-transfer fluid and thermal energy storage materials. They also study the corrosion and durability of containment materials. Specific research includes measuring heat loss as a function of temperature to determine thermal performance of CSP receiver tubes, and measuring optical characteristics of mirrors and receivers to characterize their performance. 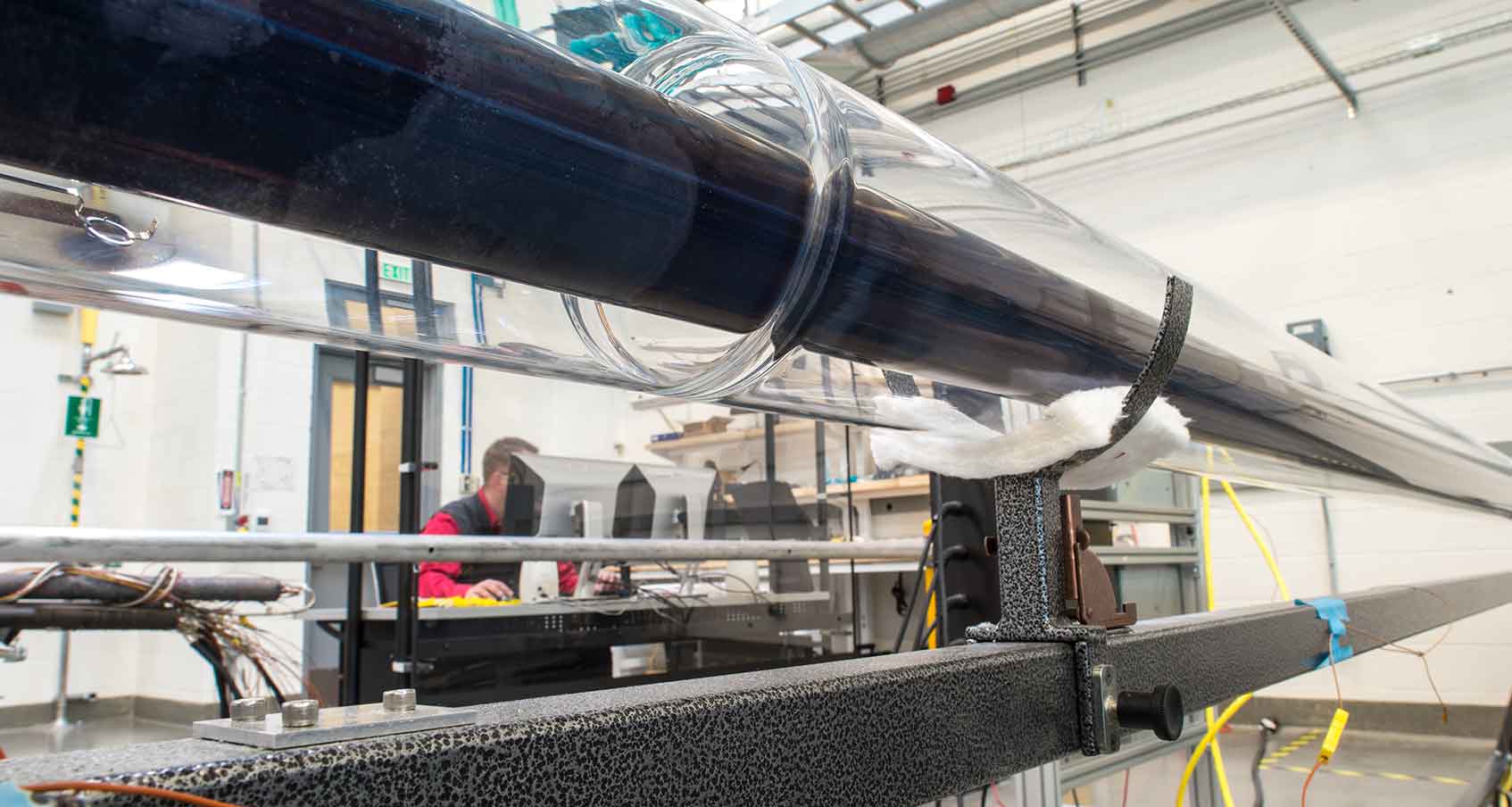 Learn more about the capabilities discussed below by contacting the CSP Research Staff.

Recording the power use at desired absorber temperatures on the receiver heat-loss test stand.

Our Receiver Test Laboratory houses the parabolic-trough receiver test stand, which researchers use to analyze the steady-state, off-sun thermal losses of receivers used in solar parabolic trough power plants. These receivers, also called heat-collection elements (HCEs), are long absorber pipes enclosed in a sealed, insulating glass envelope to reduce heat loss. In the test stand, electric heaters and thermocouples are first placed inside the receiver being tested. Then, the power use of the heater is recorded at a desired absorber temperature. This procedure is repeated for several different absorber temperatures to generate heat-loss curves for a receiver. Research continues to help reduce HCE optical losses and to further reduce receiver heat loss at elevated temperatures.

The laboratory has many tools and instruments that allow measurement of optical properties (reflectance, absorptance, transmittance) and performance. We can measure a wide range of feature sizes (from nanometers to meters) and sample sizes (from millimeters to tens of meters) traceable to the National Institute of Standards and Technology.

In addition to measurement of optical properties, analytical capabilities available include: 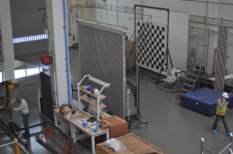 The VSHOT system in the Collector Characterization lab (note person for scale).

To develop and test concentrators for CSP systems, our researchers use the Video Scanning Hartmann Optical Test and the Solar Optical Fringe Alignment Slope Technique.

VSHOT® (Video Scanning Hartmann Optical Test). We use VSHOT to characterize the optical performance of point-focus and line-focus optical concentrators. The system uses laser ray tracing combined with fast video imaging to mathematically describe mirror concentrator surfaces and compare them to desired surfaces. It reports slope errors of the actual surface relative to the desired surface and provides plots of error location, magnitude, and direction. The surface slope data and mathematical surface description produced by VSHOT can be input into ray-trace models to predict flux distributions on receivers.

VSHOT is also fast, allowing a thorough test of a solar thermal concentrator in 2 to 3 minutes or less. When detailed data are not needed, VSHOT can test mirrors in even less time. The system has been used extensively in both the laboratory and field to quantify parabolic dish and parabolic trough optical performance, providing developers with valuable information in their efforts to deploy cost-effective, high-performance CSP technology.

SOFAST (Solar Optical Fringe Alignment Slope Technique). SOFAST is a new automated concentrator characterization system developed by Sandia National Laboratories. Instead of point ray-tracing, it uses a video camera and computer to capture and analyze fringe patterns from a reference target pattern in the reflected image of the concentrator. These patterns generate similar slope-error information over the surface of the mirror under test. Data acquisition is extremely fast, consisting of the time needed to take a few digital pictures of the virtual image of the target as seen in the concentrator under test. SOFAST was originally developed by Sandia and, under a Department of Energy-funded partnership agreement, was adapted for trough mirror facet characterization and licensed to NREL.

Our exposure chambers simulate a variety of conditions, including sunlight, various temperature and humidity levels, rain, freeze/thaw, hail, and salt spray. Chambers use xenon arc light that accelerates light exposure by a factor of 7.5. The testing chambers run 24 hours a day, seven days a week, replicating specified conditions on an ongoing basis.

We expose samples to a variety of accelerated exposure tests to determine their rate of degradation and to estimate lifetime. Typically, we measure samples until they have degraded by 10% of their initial value. The samples are measured at regular intervals over a period of months and years, which helps to ensure that a new product meets desired optical requirements and avoids failure in the field.

Our Freeze-Thaw Chamber has a large (10 ft x 10 ft) thermal cycling chamber capable of cycling temperature between -40 °F and 150 °F at a constant level of humidity. Concentrators/mirrors developed for outdoor applications must stand up to such extremes in temperature and maintain their optical shape for optimum performance. The chamber is used to cycle mirror elements that have been baseline characterized with either the VSHOT or SOFAST techniques. Once the mirrors have gone through the standard cycling process, they are re-characterized to assess any change in optical performance.