NREL researchers seek to control the optical and electronic properties of quantum-confined semiconductors through doping.

This involves coupling of the core electronic structures to surface bound ligands or interactions with plasmonic nanoparticles to direct and transduce energy. We aim to utilize rational synthesis of nanocrystals, including production of asymmetric and multifunctional structures to investigate the unique phenomena offered by quantum confinement. 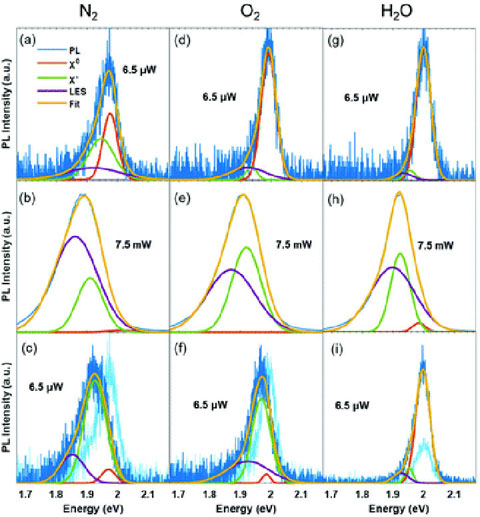 We have demonstrated the sensitivity of monolayer tungsten disulfide (WS2) to its local environment and its potential for detecting relative humidity.

Monolayer WS2 is typically considered an inert 2D layer. However, we demonstrated that the optoelectronic properties are heavily influenced by the local environment. Therefore, this nanomaterial could be used as a relative humidity sensor via photoluminescence detection. 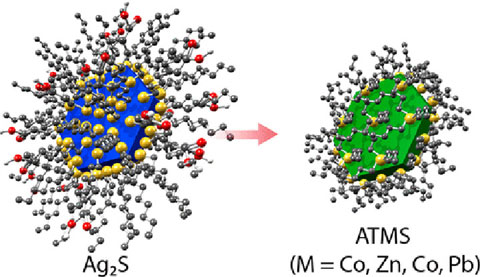 The development of 2D or atomically thin material systems has led to the discovery of unique properties not found in bulk or 3D counterparts. Here we develop the synthesis of a new class of 2D semiconductors. 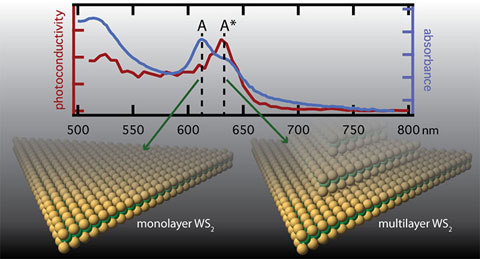 We used steady-state microwave conductivity for measuring charge generation action spectra in WS2 mono- to few-layer transition metal dichalcogenide systems at solar-equivalent light fluences. Multilayer portions of the sample were shown to be primarily responsible for the observed photoconductivity.

Multilayers are shown to be a primary source for the formation of long-lived free charges in transition metal dichalcogenides, an important finding for solar fuels and photovoltaics.

Steady-state microwave conductivity has the sensitivity to provide mechanistic information on charge carrier generation in mono- to few-layer semiconductors, where the total absorptance of light is less than 3%.