The examples below demonstrate in detail the different types of analysis that the dGen model can support.

Projecting how much DERs are adopted and where is a critical input for peak-load forecasting and integrated resource planning. For example, solar adoption forecasts are used to estimated future load. These forecasted loads are then used to identify an optimal set of resources to procure over the planning period. Erroneous assumptions about solar adoption have significant impacts on the resources that are procured, as well as the resulting operation of the utility system.

A recent study by the dGen team demonstrated that the costs of incorrectly forecasting rooftop solar capacity are high, with an average net present savings of $2.3 million/terawatt hour of utility sales. To learn more, see Estimating the Value of Improved Distributed Photovoltaic Adoption Forecasts for Utility Resource Planning.

For an example of a similar application at the state-level, see Projections of Distributed Photovoltaic Adoption in Kentucky through 2040.

The dGen model can be used to explore the sensitivity of various DERs to policy and market factors. 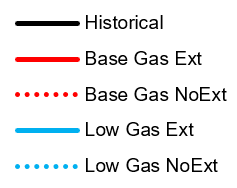 On the state-level, The Impacts of Changes to Nevada's Net Metering Policy on the Financial Performance and Adoption of Distributed Photovoltaics report used the dGen model to evaluate changes to Nevada's net energy metering tariffs for customers with distributed generation. The report assessed the impact of the new tariffs' design on a photovoltaic system's payback period and projected photovoltaic adoption under the new tariffs.

All technologies modeled within the dGen framework leverage a database of highly resolved geospatial information and use an agent-based approach. Because each agent is assigned an actual location, it can be associated with several attributes from data sets in the underlying geospatial database using a simple spatial overlay.

The spatial layers include, but are not limited to, energy consumption profiles, census demographics, zoning and building counts, and renewable resource. The combination of these spatial layers allows dGen to identify the most promising sites and regions for DER deployment. In addition, the model can easily be trained on new sources of data and applied at multiple spatial resolutions—national, state, and even distribution-feeder level.

To learn more, see Assessment of the Economic Potential of Distributed Wind in Colorado, Minnesota, and New York.

Though DERs are likely to play a substantial role in the future energy system, there are many unresolved questions. The dGen model can be used to explore forward-looking topics, such as understanding:

The dGen model operates in two modes specialized for different types of analysis: