This is the fourth and final blog in a series of articles on the growing interest in identifying and incorporating the values of solar (VOS) to the grid into electricity rate structures. For previous posts and background information, please see the “Louisiana: Net Metering Cost/Benefit Study Authorized,” the “Utah: Monthly Net Energy Metering Fees Debated,” and the "Iowa: Tax Credits Increased, Distributed Generation Investigated, and Communities Impacted" posts.

To date, Minnesota (MN) is the only state to codify an alternative to its existing net energy metering (NEM) rules and regulations. Through legislation, MN allowed utilities to voluntarily implement a value of solar (VOS) tariff—the parameters of which were developed by a regulatory process. No utilities have voluntarily adopted the VOS tariff to date.

The State of Minnesota passed legislation in 2013 that required the MN Department of Commerce (MN-DOC) to establish a calculation methodology to quantify the value of distributed photovoltaics (PV). The specific value components required for inclusion in the calculation were: energy and its delivery, generation capacity, transmission capacity, transmission and distribution line losses, and environmental value. The state’s objectives in establishing the MN VOS program methodology were to:

According to Bill Grant, the Deputy Commissioner of Energy and Telecommunications at the MN-DOC, the MN utilities have expressed concern that the VOS valuation is not based on traditional methods of calculating avoided cost, and the environmental groups have concerns that the VOS tariff payment level would not be high enough to support solar development without additional incentives, at least in the near term (Grant 2014).

The MN-DOC submitted the draft methodology to the MN Public Utilities Commission (PUC) in January 2014. The PUC approved the methodology at a hearing on March 12, 2014, and posted the written order approving the methodology on April 1, 2014.

Some key characteristics of the MN VOS policy include: 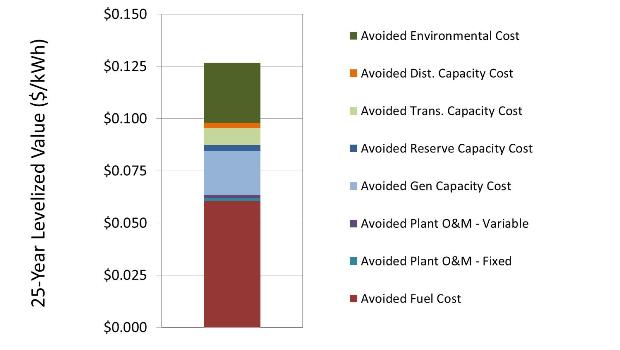 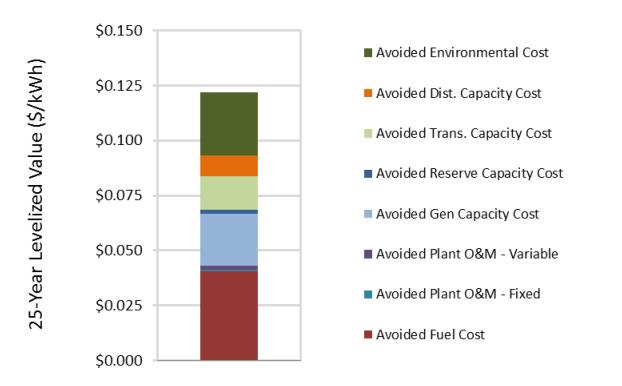 Both examples indicate that the most significant elements of the VOS rate appear to be avoided fuel cost, avoided environmental cost and avoided generation capacity cost. The calculation used the federal government’s avoided cost of carbon. 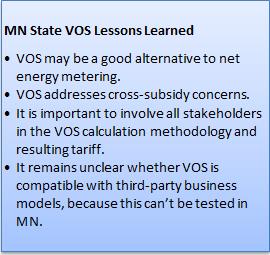 Bill Grant shared some early-stage lessons learned of the process so far at the SEPA Utility Solar Conference (Grant 2014). They include:

In a separate but related proceeding, the PUC directed Xcel Energy to submit a VOS calculation by May 1, 2014, to be considered as a rate for Xcel’s proposed Community Solar Garden Program.

Following clarification from the MN-DOC on the appropriate application of the methodology, Xcel revised their calculation to a 25-year levelized value of 12.08 cents per kilowatt-hour, with a present 2014 value of 9.4 cents per kilowatt-hour (Xcel Energy. Docket No. E002/M-113-867. Reply Comments, June 19, 2014). To facilitate stakeholder analysis and verification of VOS calculations, PUC staff provided the spreadsheets that it had developed in accordance with the approved VOS methodology as Attachment A to the Staff Briefing papers filed on July 25. The PUC staff’s calculation of the VOS rate using the input values as recommended by the MN-DOC and listed by Xcel in its Reply Comments largely confirms the VOS rate calculated by Xcel, with some minor differences.

Commenters took varying positions on use of the value of solar rate for community solar gardens (MN PUC Staff Briefing Papers, August 7, 2014). Some developers favored using the applicable retail rate with optional REC payments because of the higher initial value—approximately 15 cents per kilowatt hour for a residential or small commercial customer subscribed to a garden <250 kW. Xcel energy favored using the applicable retail rate based on its flexibility relative to the value of solar rate (Xcel Energy. Docket No. E002/M-113-867, May 1, 2014). The majority of solar developers and advocates supported the use of a VOS tariff with an added incentive payment because of its transparency and predictability. With a known base rate escalating at the Consumer Price Index and an added incentive, a project would be more likely to attract financing. Many commenters including the MN-DOC agreed that solar gardens should eventually receive the VOS rate with an added incentive to allow for project financeability.

In the interest allowing solar garden projects to proceed without further delay, on August 7, the PUC approved Xcel’s Community Solar Garden plan without the VOS rate, instead using an average retail rate with an added payment of up to 3 cents per kilowatt hour for renewable energy credits.  The PUC also directed Xcel to file annual updates to the VOS rate calculations with a March 1 deadline.

To facilitate a possible future transition to a VOS rate, the PUC directed the parties:

As of September, no Minnesota utility has adopted the voluntary VOS tariff rate in lieu of net energy metering, instead choosing to continue compensating customers at the retail rate (Farrell 2014). The question remains—will utilities opt into the VOS tariff? And if so when?