Taking Stock of the Solar Market in 2015

Each year the Lawrence Berkeley National Laboratory (LBNL) publishes separate national solar market reports relating to distributed and utility-scale solar. The most recent reports were published in August 2016 and offer a trove of data relating to these markets as they stood in 2015. This blog article highlights some of the major developments in the market as they relate to national trends in installations and costs. First, researchers at LBNL have tracked historical solar capacity additions since 2007, as illustrated in Figure 1. Utility-scale installations, utility-scale photovoltaics (PV) in particular, have historically been the largest driver of capacity expansion. LBNL, along with other market experts, anticipate this trend will continue through 2021.

Figure 1. Historical and Projected PV and CSP Capacity by Sector in the United States

The dominance of utility-scale PV in the market along with its significant expansion in recent years corresponds with the dramatic decline in power purchase agreement (PPA) prices for utility-scale PV projects from 2006 – 2015 (Figure 2). In 2015, solar PPA prices were below $50 per megawatt hour (MWh) and some projects in the southwest have been priced between $35 – $40/MWh. Recent cost declines have been attributed to improvements in capacity factors and reductions in installation costs.

According to LBNL these prices, though dramatically lower than historical prices, still struggle to compete with power generated from existing natural gas power plants due to low costs of natural gas.  On the other hand, PPA prices are competitive with power generated from new natural gas power plants given upfront capital cost recovery requirements along with escalating fuel prices. This development may be particularly important for the industry given that mandatory requirements to procure renewable energy via Renewable Portfolio Standards (RPSs) that have supported solar expansion may begin to expire and result in reduced demand from RPSs.  Thus, in order for the utility-scale solar market to continue to add capacity it may be faced with competing against other technologies based upon price alone, as seen in the natural gas example.

The growth of the residential and non-residential PV market (See Figure 1) also corresponds with declining installation costs (See Figure 3). In 2015, the median installed price per watt was $4.10, $3.50, and $2.50 for residential, non-residential ≤500 kilowatts (kW), and non-residential >500 kW projects, respectively. LBNL researchers note that in many states median prices are lower than these national figures, given costs of installation are high in California, Massachusetts, and New York. These three states drive up the national median cost given that 69%-87% of national installed capacity is concentrated in CA, MA and NY, depending upon the sector.

Regardless, national distributed PV median costs have declined, on average 6 – 12% per year since 1998. Though these cost declines were initially associated with reductions in PV module prices, more recently cost declines have been associated with soft costs - such as reductions in installation, inspection, and permitting costs. At the same time, tax and performance based incentives offered at the state level have also been declining (shown in Figure 4). As such, LBNL argues that these changes in financial policy have offset some of the cost-savings associated with a reduction in PV module and soft costs. Despite this issue, the LBNL researchers argue that on balance, the economics for customer-sited PV has improved. Though LBNL does not speculate on the impact of these cost declines, they may explain why experts anticipate residential and non-residential installations to capture a larger share of the expected solar capacity expansion through 2021 (See Figure 1). 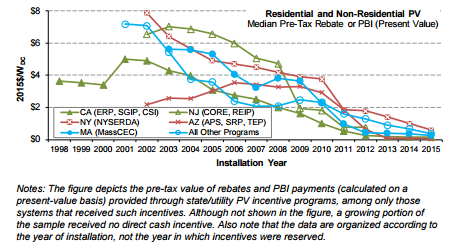 Figure 4. State/Utility Rebates and Performance Based Incentives over Time

Overall, it is clear that in 2015, the cost of both utility-scale and distributed solar has continued to decrease and may continue to do so in 2016 resulting from capacity factor improvements, and soft cost-related reductions. At the same time, solar capacity expansion has continued to increase year-over-year largely to serve a growing share of certain states’ RPS requirements. With the significant estimated installation expansion expected in 2016, it will be interesting to see the potential effect on prices and how this may impact further capacity expansion investments nationwide.