Under U.S. law, individual states can evaluate and modify interconnection and net metering policies and regulations based on changes in technology. Due to the increasing complexity of new photovoltaic (PV) technologies, one of the most popular requests received by NREL's Solar Technical Assistance Team (STAT) is for help with understanding and evaluating solar interconnection and net metering policy options.

Delaware provides an illustrative example of how states across the country are responding to technology developments such as these with updated policies. In 2007, Delaware Senate Bill 8 required that utilities offer net metering for PV systems less than 2 megawatts in size and adopt interconnection rules based on best practices. With repeated annual Freeing the Grid scores that showed a need for interconnection improvement, the Delaware Public Service Commission (PSC) set out to revise its rules in line with Interstate Renewable Energy Council recommendations.

In 2012, the Delaware PSC submitted a Quick Response request to STAT. The PSC required assistance in formulating policy regarding the accuracy of inverters used in solar PV systems for interconnection and net metering. Specifically, the PSC needed information on whether inverters were accurate enough to fulfill the statutory requirement of "recorded by appropriate metering" for measurement of the output of distributed generation PV systems.

NREL staff provided information on inverter standards and technology as well as guidance on inverter and interconnection policies. The Delaware PSC used NREL's technical assistance to adopt changes to their interconnection policy concerning the type of inverters required to participate in a solar renewable energy credit (SREC) procurement program. Specifically, the PSC amended the definition of "Required Meter" under their policy. This amendment made it easier for consumers to understand the types of inverters required for net metering and SREC participation in Delaware.

This example shows how Delaware's efforts to stimulate solar market growth have been matched with regulatory updates that align with developing technologies. Such an approach appears to be an important element in the formula for solar success. According to a 2014 NREL study, Delaware has the highest installed PV capacity per capita among peer states with 16.2 Watts per person. 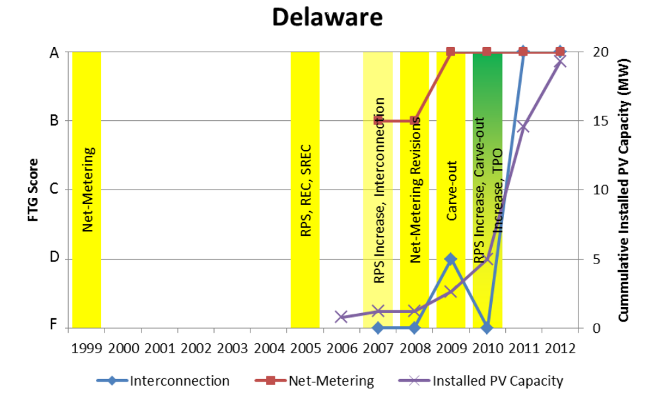