With 2014 coming to an end, it seems like a good time to take a look back on the past two years of solar policy headlines related to renewable portfolio standards. These state-level policies set a goal for electricity generation from renewable resources, usually given as a time-bound percentage of total electricity generation, such as 25% renewable generation by 2020. One of our most popular policy basics pages provides more background info on state RPSs, so we will dive right into the market impacts of this type of legislation.

During 2013, 34 states sought to make changes to their RPS. Seventeen states introduced legislation that attempted to reduce the level of the goal or expand the RPS beyond renewable energy resources, but none of those bills passed. Another 17 states developed legislation that attempted to increase the RPS goal or expand eligibility of renewable energy technologies. Four of those bills were enacted. At the end of the year, 29 states and the District of Columbia had an RPS in place and eight states had non-mandatory renewable energy goals.

In the past year, 12 states introduced legislation involving an RPS. These bills include provisions such as exempting educational institutions from renewable energy procurement charges, creating standards for 2040 and beyond, and language modification.

One of the common topics this year has been carve outs, which NREL has quantifiably shown to drive target technology markets. Carve outs require that a certain percentage of the RPS be met with the specified technology or resource, such as solar. There are currently several states in the process of establishing carve-out standards by resource type. 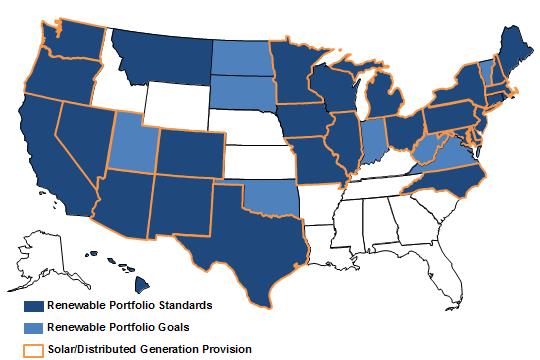