How Solar is Contributing to Renewable Portfolio Standard Compliance

Renewable portfolio standards (RPSs) allow renewable energy resources such as wind, solar, and biomass to contribute toward a state’s renewable energy goals. However, many states have set minimum thresholds for the amount of solar or distributed generation that must be used to meet the RPS (called “solar carve-outs”). These carve-outs are typically, though not always, fulfilled using in-state solar projects (both distributed solar as well as commercial and utility scale).

State and local policymakers may be aware of solar carve-out provisions but may not understand how much solar is being used in their state to meet RPS requirements. To help understand how much solar is being used in RPSs, NREL created a presentation and data viewer (in a downloadable spreadsheet format) to display data collected from renewable energy certificate (REC) tracking systems and other public sources. The data viewer is designed to improve understanding of which resource types are used to meet RPS compliance. These resources are also intended to help states and local governments understand the extent to which renewable energy is coming from outside a state’s borders to comply with RPSs.

The REC data viewer allows a user to select a state to see how much solar was used to meet RPS requirements in recent years (2012 and 2013). For example, the data show that in New Jersey about 1.5 million solar megawatt hours (MWh) were used to meet RPS compliance in 2013, as shown below. 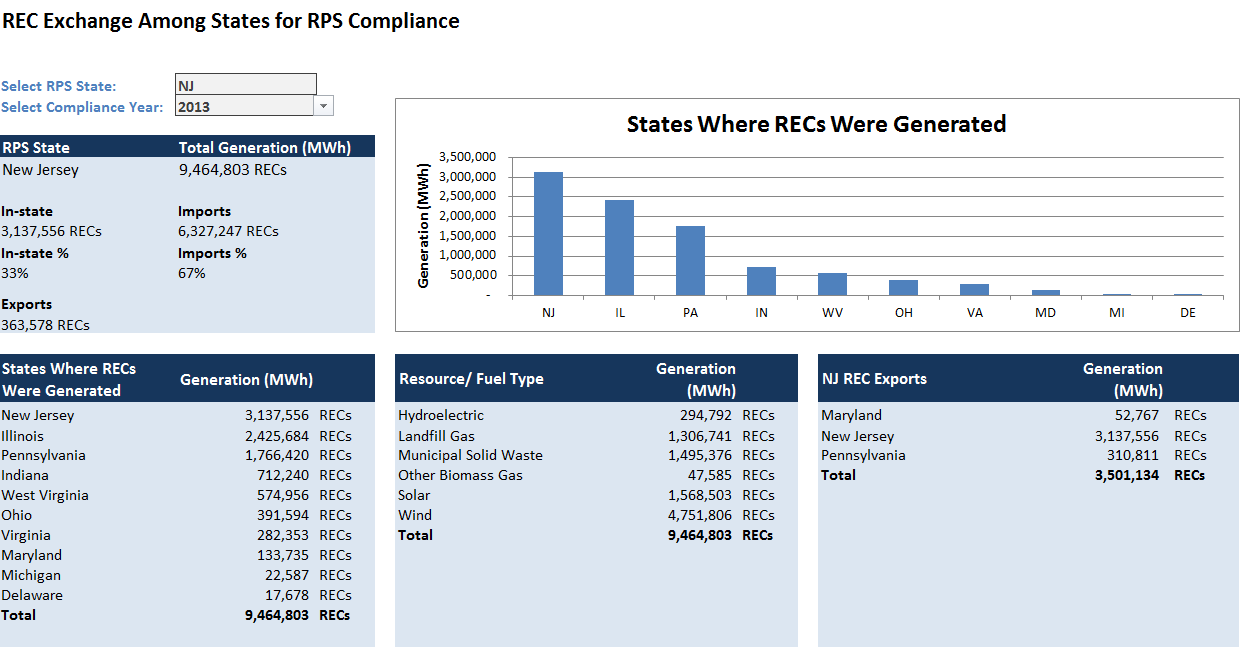 The data viewer project also gathered information on how small generators, such as solar, are using regional REC tracking systems. While the vast majority of small generators are solar, other resources include geothermal, hydropower, landfill gas, and wind. Small generators may use a tracking system if required to do so to contribute to the RPS, receive and incentivize payment, or for other reasons. As of publication, PJM-EIS, which covers the mid-Atlantic region, had the greatest number of individual small generators registered.

PJM-Environmental Information Services
In addition to resource data, the presentation and data viewer provide information about cross-state transactions that were used to meet RPS compliance requirements in 2012 and 2013. On average, states sourced 61% of 2012 RPS requirements from in-state resources (65% on a weighted average basis) whereas cross-state transactions varied by region. For example, in the West, states generally rely on in-state resources more than states in New England and the Mid-Atlantic. As a comparison, in 2012 Colorado met 92% of its RPS with in-state resources while Connecticut met 41% of its RPS with in-state resources. Connecticut relied on at least six other states to contribute toward its RPS goals as represented in the graphs shown. 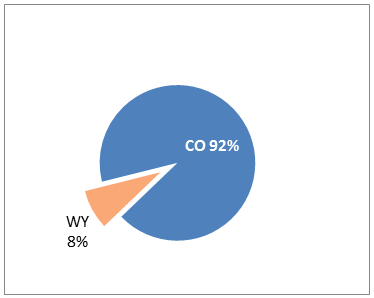 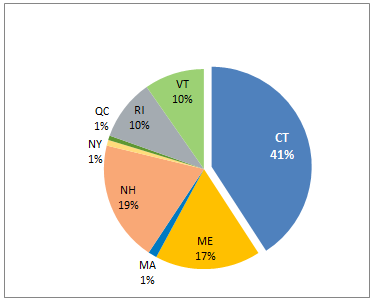 States that used out-of-state RECs sourced them according to their RPS requirements, which typically restrict eligible RECs to the state’s region (e.g., ISO or neighboring states). Utilities may have sourced out-of-state RECs to reduce the cost of compliance, to source RECs from specific generation types, or for other reasons.