How Is Solar PV Performing in Hurricane-struck Locations?

The ongoing 2017 Atlantic hurricane season has already been the most active since 2005. Hurricane Harvey, classified as a Category 4 storm, made landfall on the Texas Gulf Coast on August 25th with winds topping 130 mph and inundating the City of Houston with over 50 inches of rain in some areas, claiming upwards of 30 lives. Seventy percent of surrounding Harris County was covered with more than a foot of water, which flooded roughly 136,000 buildings.

Two weeks later, Hurricane Irma impacted the Caribbean as a Category 5 storm and caused damage to a number of southern states as a Category 4 storm. Florida was impacted by Irma when it made landfall on September 10th with initial cost estimates around $50 billion. In Miami-Dade County, nearly 730,000 customers lost power, and approximately 1.57 million customers across the state experienced outages.

Hurricane Maria, another Category 4 storm, devastated Puerto Rico and the U.S. Virgin Islands on September 20th. On Puerto Rico alone, Maria crippled 95% of the island’s communications networks, damaged dams, tore up roads, leaving millions without power, food and water. The electric grid in Puerto Rico was severely damaged and reports indicate that the majority of transmission lines were destroyed, potentially leaving 3 million people without power on the island for the next few months. The impact is visible in a before-and-after night-time image comparison of Puerto Rico (Figure 1), courtesy of the National Oceanic and Atmospheric Administration (NOAA). 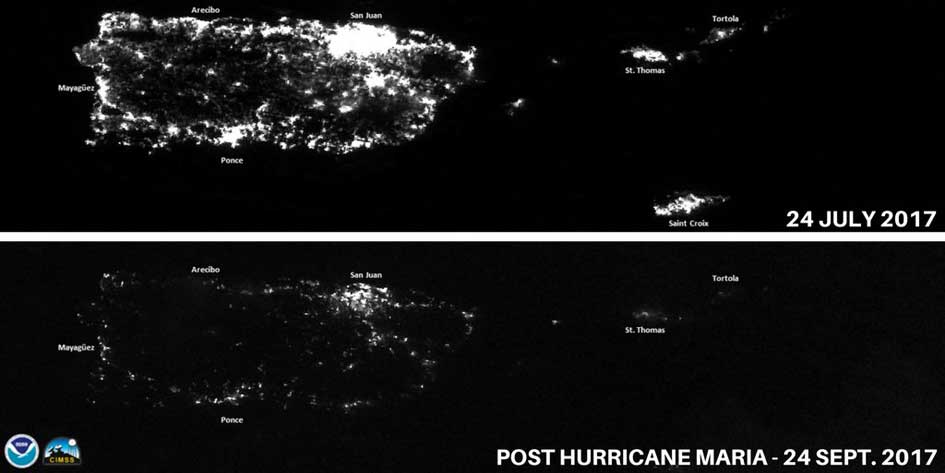 As aid is being administered to these disaster-stricken areas, a few reports are rising to the surface about how solar photovoltaic (PV) systems have fared in the various locations. It’s been interesting to note how different locations were impacted by winds and hurricanes and where solar PV has done well, and where it has been destroyed. When considering resilience, the case is often made for renewable energy microgrids, utilizing locally-sourced energy generation, spatial diversity and shorter transmission and distribution lines. On-site renewable energy generation paired with storage and islanding controls offers power solutions during times of fuel disruptions. In theory, decentralized power systems, like renewable energy microgrids, enhance resilience because if one area suffers damage from a storm, distributed generation systems can provide localized power to certain areas and damages won’t cascade through the entire system. While not 100% resilient (as no technology will be), these systems can provide power to critical sites, such as water treatment facilities, medical clinics or hospitals, community shelters or emergency dispatch centers, for certain, critical loads during larger grid outages.

Assessing the impact of storms and high winds on PV systems can inform more resilient designs of those systems in the future. While it is still too early to comprehensively assess the overall damage to PV systems in all of the locations impacted by hurricanes this year, some information is available. A few systems are known to be intact, such as the Guaynabo Water Filtration Plant in Puerto Rico where the roof-mounted PV system survived Hurricane Maria (Figure 2). Others have not fared as well. A 500kW ground-mounted PV system at the Humacao waste water treatment plant in Puerto Rico, was severely damaged after the eye of the storm went directly over the plant (Figure 3). 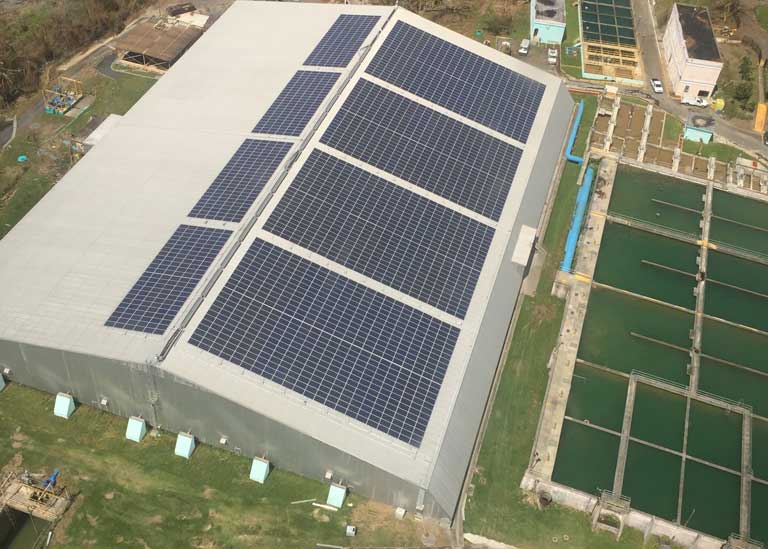 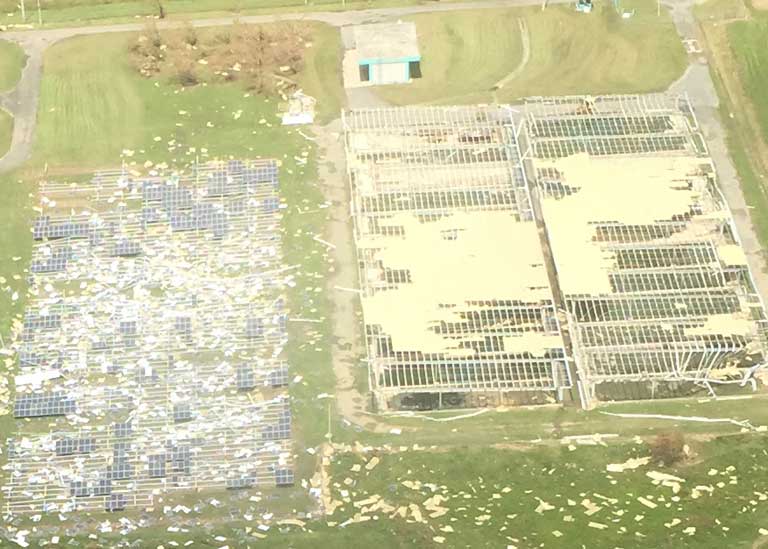 Systems installed in Puerto Rico prior to the 2017 hurricane season were most likely not installed for energy resilience, but because of economic or, perhaps, for environmental purposes.

While an on-the-ground analysis is needed to determine specific technical reasons for system failure and how resilience could be incorporated into future designs, there are two factors that may have played into the systems’ successes: geography and mounting technique. The Guaynabo Water Filtration Plant is located on the leeward side of the island of Puerto Rico, whereas the Humacao Waste Water Treatment Plant was in the eye of the storm and on the windward side of the island, absorbing the brunt of the impact. The Guaynabo system was also mounted flush with the roof, whereas the Humacao system was ground mounted, so wind lift could have contributed to the destruction of the system.

Other systems in hurricane impacted locations have been reported as intact and running. The table below is just a snapshot of some of the emerging news around how energy systems have been impacted by hurricanes—and what can be done to enhance system resilience in the future. It will be interesting to learn more about this topic as assessment reports are finalized in the months to come.

In the wake of natural disasters like the 2017 hurricanes, we owe future generations a retrospective to learn from disasters and be better prepared in the future. Microgrids provide reliability benefits to communities after a disaster, if they are planned and developed to do so prior to the disaster striking.