Floating solar photovoltaic (PV) systems, so-called flotovoltaics (a trademarked term) or floating solar, represent an emerging application in which PV panels are sited on bodies of water. The PV panel technology used for floating solar applications is very similar to traditional ground-mounted PV, the primary difference being the platforms that the PV technology rests on float in water.

The first floating solar PV installation came online in 2007 in California. However, the vast majority of existing systems became operational between 2014 and 2016, with more than 98% of the existing capacity installed in this timeframe (see Figure 1). Over 94 megawatts (MW) of floating solar PV have been installed worldwide as of the end of 2016, with the bulk of the systems residing in Japan. In fact, of the 70 largest floating PV installations in the world, 45 of them, representing nearly 60% (or 56.5 MW) of the world’s installed floating PV capacity, has been installed in Japan. 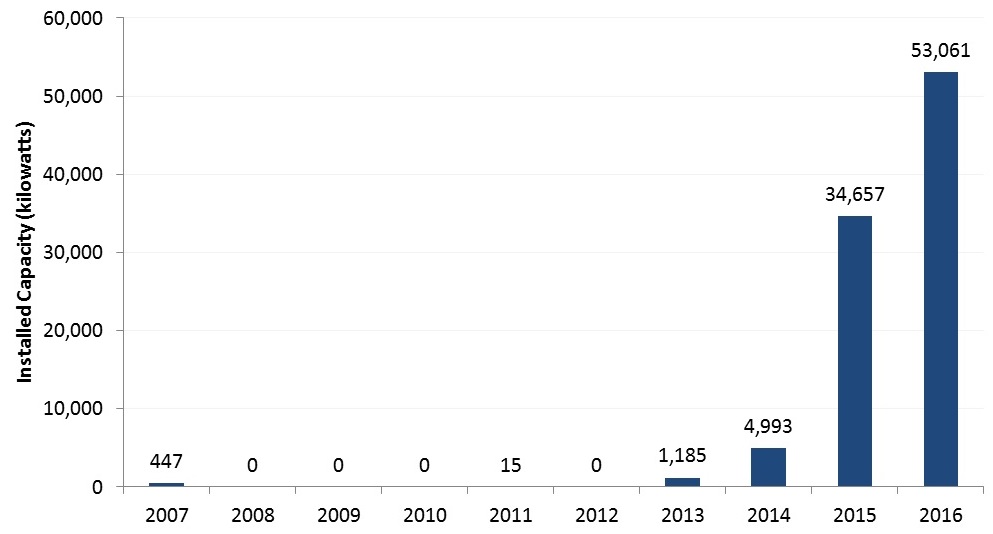 Though floating solar PV systems are still in the early phases of adoption and use, municipalities and businesses that have pursued the technology cite numerous benefits, including efficiency gains (due to water cooling the panels), reductions in unwanted algae growth, slower rates of water evaporation, and the productive use of otherwise undevelopable “land” (or, conversely, the preservation of land that could serve other purposes). In areas where land is at a premium, siting PV on water can be a more economical solution when the value of the land used for its “highest and best use” is included. Cost savings are also achieved by the elimination of grading in the case of ground mounted solar, and roofing and structural upgrades when compared to rooftop applications.

The United States has seen limited adoption of floating solar PV to date, but institutions as diverse as wineries and water treatment facilities are exploring its applications. California’s Far Niente Winery—the site of the first floating PV system—installed a two-part, 477 kW PV system that produces more electricity than the winery uses annually, making it a net-zero energy establishment. The system consists of 994 panels floating on 130 foam-filled pontoons atop the winery’s irrigation pond and an additional 306 panels of ground-mounted PV on an adjacent acre of land. Siting the solar installation on water enabled the winery to preserve approximately 1.5 acres of productive vineyard land. Among wineries, another 10 kW floating solar project was installed in 2016 at the Kunde Family Winery in Sonoma County, California.

In the water treatment arena, Sonoma Clean Power announced plans in 2015 to install a 12.5 MW floating solar plant on holding ponds operated by the county’s water agency. Floating solar emerged as a favorable option given the limited availability of affordable, open land to host solar projects in the area. On the opposite side of the country, New Jersey American Water announced plans for a similar floating solar pilot project in 2011. The 538-module installation was designed to produce 135,000 kilowatt-hours (kWh) of electricity annually, representing about two percent of the energy load of the nearby Canoe Brook Water Treatment Plant. New Jersey American Water estimated that the $1.35 million project would yield $16,000 in annual energy costs savings.

Floating solar applications extend beyond wineries and water treatment facilities, too. A 5 kW proof-of-concept floating PV system was installed in 2016 at the University of Central Florida as a predecessor to a larger floating PV array that is currently under consideration. The pilot project, a combined effort between a group of mechanical engineering students and the school’s Department of Energy and Sustainability Management, will also serve as an educational tool to study the effects of the system on water biology and aquatic plants.

Whether floating PV applications continue on this positive growth trajectory moving forward remains to be seen, but the technology is peaking interest, particularly in areas where land constraints preclude other forms of PV development.