Last week I had the great honor of presenting about U.S. Department of Energy (DOE) and NREL data, tools, and analysis available to jurisdictions considering how to get to 100% Renewable at the Ready for 100 dialogue hosted by the Sierra Club, Renewable Cities, and ICLEI USA. Elected officials and staff from 20 cities attended the meeting, representing different points along the trajectory of getting to the 100% Renewable goal.

Through structured dialogue, the meeting illuminated the most significant challenges cities face in achieving their renewable energy goals. Beyond commiserating with other jurisdictions over common challenges, attendees were called upon to propose solutions to each other’s challenges. The result: a rapid-fire solution generation forum, which led to creative collaboration!

One of the greatest activities came during the kickoff session, in which four cities that had already committed to 100% renewable energy pitched their most powerful rationales for 100% renewable – the top arguments that resonated with their stakeholders. They were all different; for the first city, climate science was the driver behind 100% clean energy; in the second, it was the desire to support a better life for their children; the third city cited a boost to the economy through clean energy developments, and the fourth found support through quality of life improvements for constituents.  The audience then voted on which argument was the most compelling. In the end, the economic development argument won the audience over.

In the data, tools, and analysis for cities session the next day, I talked a lot about the energy data for 23,400 cities which NREL developed in partnership with DOE, the tools and strategies we use for renewable energy option analysis for cities with which NREL works, like Aspen, Colorado, and the new analyses and research on the edge of high penetration electricity grids. Fellow speakers on the panel also talked about Google’s Project Sunroof and the Urban Sustainability Director’s Network Carbon Neutral Cities Alliance.

For me, the meeting reinforced the critical need to deliver data, tools, and analysis that directly address cities’ needs and the stated goals of elected officials and their constituents. Check out the current tools and resources (especially the new city data!) and keep telling us what you need to inform clean energy decisions. 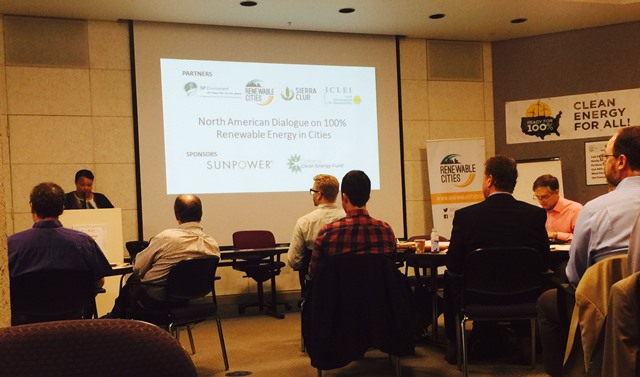