A Meeting of the Solar Minds: Takeaways from the SunShot Summit

It was a great meeting of the minds, bringing together a range of people who are working on the solar technology frontier as well as deployment strategies. The conference not only gathered all of SunShot's project partners for progress reviews, but it also encouraged those of us who are working toward cost-competitive solar to exchange ideas on how to better inform technology and market decisions. Half of the exhibit hall was filled with rows of posters summarizing each project funded by the SunShot Program. Attendees were able to browse the information and learn about SunShot—funded projects from representatives of each team, which provided an excellent opportunity for awardees to meet each other, exchange ideas, and identify synergies between projects. 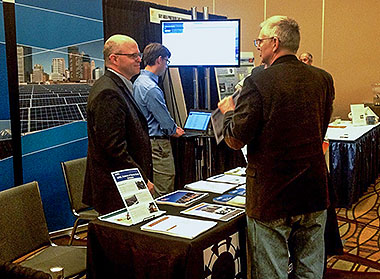 NREL's presence at the SunShot Summit included a booth focused on the soft costs of solar, where Nate Blair and Aron Dobos demonstrated models and tools to passersby. Photo by Liz Doris/NREL

I attended many sessions and was both exhausted and exhilarated by the event! My favorite session was hosted by DOE Fellow Adam Cohen on the last day of the summit. Cohen is interested in better evaluating program impacts by using methodologies, like randomized control testing (RCT) from the medical field, to understand what is actually having an effect in the market. That morning, we heard from several other well-informed speakers. Catherine Wolfram, a professor at UC-Berkeley, spoke about the E2e Project that she co-directs. E2e is about bringing "big energy" (E) to "small energy" (e) using randomized control trials. Easan Drury spoke on NREL's SunShot efforts to better understand human decision-making processes.

The main event of Thursday's workshop was when we split into three groups to brainstorm programs and ways to design and evaluate them. Each group was given one of the following challenges:

I was on the first team discussing programmatic options for addressing the low-income market. We determined that the existing mechanisms, such as group purchasing of systems or participation in shared solar programs, theoretically work in this market. However, it's the outreach and marketing efforts that need to be the focus of programs. We discussed borrowing methods used in low-income energy efficiency programs, such as energy champions and ambassadors and using randomized controlled testing to see if those people would have a better uptake percentage than sending in solar developers or non-profit representatives. We think it would. It's an interesting question to think about: would you rather get information on solar from your trusted community leader or from a solar expert? Who would you buy from? The workshop's next step is to continue working toward rigorously evaluated programs, but I also hope to see some of the program ideas take hold!

Overall, it was a great week at the SunShot Summit!