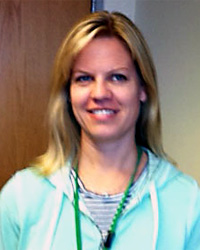 Katherine Hurst is a research scientist at NREL. Her research interests include the development of novel materials for application in fuel cells and hydrogen storage. The work focuses on synthesis and characterization of metal alloy and metal oxide nanoparticles with emphasis on the development and application of core-shell nanostructured materials. Dr. Hurst received a B.S. in Natural Science Chemistry from the University of Puget Sound, followed by the completion of a M.S. in Chemical Engineering from the Colorado School of Mines. She received her Ph.D. in Chemical Engineering. Her thesis, which was performed at NREL under the direction of Michael J. Heben, focused on purification and gas adsorption of single-walled carbon nanotubes and their application within carbon-based hydrogen storage materials. She accepted a National Institute of Standards (NIST) postdoctoral appointment, working with John H. Lehman. Her research centered on the development of highly absorptive carbon-based optical coatings and also investigated the photochemical activity of nanostructured carbon material. In 2009, she accepted a Research Scientist position at NREL within the DOE Hydrogen Storage Center of Excellence. Since that time she has expanded the breadth of her work to also include applications of metal oxides and modified catalyst-carbon materials to energy storage applications. Currently, Dr. Hurst is the principle investigator of a project titled Direct Morphological and Compositional Control of Platinum Group Metal Thin-Film Catalysts by Atomic Layer Deposition.

2005–2007 Post doctoral work at The National Institute of Standards and Technology, Boulder, CO