For the first time, researchers capture 3D images of the crystal structure inside of operating single electrode particles. The images revealed unexpected results, as detailed in a recent journal article. 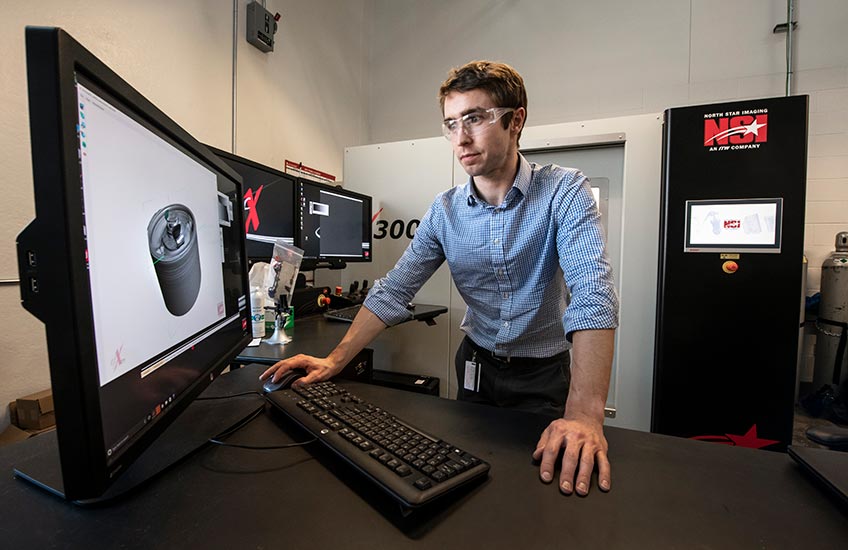 Drop a sponge into a water bucket, and the sponge will quickly soak up the water. The water works its way through the sponge, saturating every inch from the outside in. When you turn on the battery in your electric vehicle (EV), a similar phenomenon occurs. Lithium (Li) ions rush through the battery, powering up the motor and other electrical systems that propel your vehicle forward. Just as a sponge soaks up the water until the water molecules are distributed throughout, electrode materials absorb Li ions when you operate your EV battery cell. Yet, the Li doesn't always distribute evenly, which can cause the battery to degrade over time. In order to better understand the distribution of Li inside an operating battery, NREL energy storage researcher Donal Finegan used an innovative technique to take 3D images of microscopic particles in a battery electrode during operation—the first demonstration of its kind.

Lithium-ion (Li-ion) batteries are used in a variety of applications—from cell phones to electric vehicles to the electrical grid—and they are growing in demand. Unfortunately, battery cost and lifespan limit their widespread use in these applications. NREL conducts fundamental science research aimed at improving the lifespan, performance, and cost of Li-ion batteries using state-of-the-art modeling, experimentation, materials synthesis, and diagnostics.

Finegan, who specializes in the application of X-ray techniques to diagnose battery failure and degradation mechanisms, takes 3D images of battery materials across multiple length scales.

"In order to better understand the degradation of battery electrodes over time, we have to see how the lithium distributes while the battery is in operation," said Finegan. "This is very challenging because at the micrometer scale we are trying to capture gradient changes that are short-lived. Everything is happening in a very short timespan on a very small scale."

How small a scale, you ask? Imagine a tiny speck of dust floating through the air as the sun glints through the windows. That tiny speck of dust is equal to the size of about 50 micrometers. Using the novel combination of both high-speed X-ray diffraction (XRD) and XRD-computed tomography (XRD-CT), Finegan and his colleagues captured and quantified results at a scale 50 times smaller than that speck of dust.

Obtaining high-resolution images of minuscule chemical and crystal changes over time required a special type of X-ray imaging machine—a synchrotron, or a cyclic particle accelerator, in which an accelerating electron beam travels around a fixed closed-loop path.

"Capturing these images at such high resolution and in such short time scales requires a special camera and a really bright source of X-rays," said Finegan. "With the synchrotron's intense bright X-ray beam, we were able to capture images on the micrometer-scale."

From the Alps to Colorado—and Back Again

Finegan, originally from Ireland, has built his short but impressive career on fostering office-wide and cross-continental teamwork and collaboration. In 2017, he accepted the United Kingdom's Engineer Collaborate to Innovate Award on behalf of NREL, and in November 2018, he received the prestigious IChemE Global Young Researcher Award. The foundation of strong working relationships paved the way for his research using the synchrotron, located at the European Synchrotron Radiation Facility (ESRF) in Grenoble, France.

Two years ago, colleague and friend Marco Di Michiel, who is a beamline scientist at ESRF, told Finegan that they were installing a new detector and new optics in the synchrotron.

"I was intrigued by what Marco and his team accomplished and recognized numerous applications for Li-ion battery materials," said Finegan. "I wrote a proposal to request time at their beamline, which ended up getting accepted."

Finegan collaborated at ESRF during and since his Ph.D. program and has always had great experiences working there.

"ESRF is a remarkable, world-leading facility that facilitates cutting-edge diagnostics" said Finegan. "Not to mention that it's located in the middle of the Alps, which makes it a great place to visit."

ESRF specializes in imaging dense materials that change quickly over time, which makes it an ideal facility to study small, operating battery particles. Finegan hopes his ESRF research will help improve the energy and power density of batteries to make them favorable for even the most challenging applications.

"The partnership that Donal has fostered between ESRF and NREL has been invaluable," said Kandler Smith, NREL energy storage modeling team lead and co-author of the article. "This is the first demonstration of XRD and XRD-CT being used in combination to map single electrode particles, which the collaboration allowed us to achieve."

Li-ion batteries are almost all exclusively made with graphite anodes. Graphite is a stable material and not that expensive; however, it's not very energy dense, which is why a typical cell phone only holds a charge for one day rather than 10. Silicon (Si), on the other hand, is around 10 times as energy dense as graphite.

"For researchers, silicon is a very intriguing material because if we can make it work for many charge and discharge cycles, it has the potential for very high reward. It could greatly increase the energy density of batteries, but currently it's plagued with problems," said Finegan. "It's a very reactive material and easily breaks apart—much more easily than graphite—and we're still trying to understand why, and how we can prevent this from happening"

In terms of what happens to silicon-graphite materials during operation, the research produced some surprising results. Si particles exhibit a core region and a shell region. Just as a sponge soaks in water from the outside, Si particles take in Li from the outside, which sometimes leaves a Li-free (or dry) core and a Li-rich shell. Researchers originally hypothesized that the shell—before, during, and after operation—was amorphous (non-crystalline). Finegan and his colleagues witnessed otherwise.

"Even in what we understand to be the amorphous phase, we saw that the shell was actually semi-crystalline," Finegan said. "Imagine a mass of formerly cardboard boxes after being compacted. Most of them will be crushed, but there might still be some small boxes that survived in the dense mass. This is analogous to a semi-crystalline material, where most of it doesn't have any clear repeating structure, but some small regions of it do."

The consequence of this is that not all of the material is being used to store Li, which means that the battery isn't as energy dense as it could be. Whether this finding can be chalked up to regional differences or something else, Finegan and his colleagues intend to keep looking. XRD and XRD-CT could reveal the images that hold the key to unlocking better understanding.