Two scientists at the U.S. Department of Energy's National Renewable Energy Laboratory have been named Dan David Prize Laureates for 2007. Jerry Olson and Sarah Kurtz will receive their award in a March 8 ceremony in Paris.

The NREL scientists will share the $1 million prize in the Future Time Dimension: Quest for Energy with NASA climate scientist James Hansen.

Olson and Kurtz were selected for their "exceptional and profound contributions to the field of photovoltaic energy," the prize committee said. Solar cells based on the scientists' work "have the potential to alleviate the world's impending energy crisis," the committee wrote.

"We are extremely proud of Sarah Kurtz and Jerry Olson for receiving this prestigious, international recognition from the Dan David Foundation. Their work in advancing the development of solar technology exemplifies the progress of the National Renewable Energy Laboratory in addressing the enormous global energy challenges ahead," said James L. Spigarelli, President and CEO of Midwest Research Institute, the organization that manages NREL for the U.S. Department of Energy. "I also applaud the Dan David Prize for recognizing the achievements being made in energy technology at a time when energy concerns are paramount throughout the world." 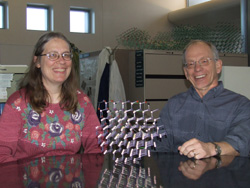 The scientists pioneered the multi-junction solar cell, which uses layers of semiconductor material to gain extremely high efficiencies in converting sunlight to electricity. A cell based on Olson's and Kurtz's design and manufactured by Spectrolab recently set a world-record conversion efficiency of 40 percent.

Most space satellites use multi-junction solar cells, and the cells power the Mars rovers, Spirit and Opportunity.

Olson said "I knew we had a winner," when he thought of the design of the solar cell, but it took years of research by a dedicated team at NREL to reach the point of manufacturable devices. "My greatest reward has been the people I've worked with," Olson said.

The scientists hope the multi-junction devices will help meet electrical needs on Earth through the use of lenses and mirrors that concentrate sunlight on the highly efficient solar cells.

"I am honored to receive this prize, especially because it reflects the promise of the technology as a partial solution to the world's need for renewable energy," Kurtz said. "In the past few years, the investment in concentrator systems using high-efficiency, multi-junction solar cells has mushroomed. Although this investment is not yet reflected by large installations, the Dan David prize recognizes this technology in the "future" category, predicting that it will be a huge success. I look forward to the day when this and other renewable technologies will provide the world with sustainable energy."

The Dan David Prize, now in its sixth year, is organized around three time dimensions, past, present and future. Each year, new fields of focus are chosen within the time dimensions. This year the future dimension was dedicated to the Quest for Energy.

"Two of our scientists winning this prize is a great testament to the progress and promise of renewable energy technologies," NREL Director Dan Arvizu said. "I know I speak for the entire NREL family in saying we are tremendously proud of Jerry and Sarah."

NREL is the U.S. Department of Energy's primary national laboratory for renewable energy and energy efficiency research and development. NREL is operated for DOE by Midwest Research Institute and Battelle.