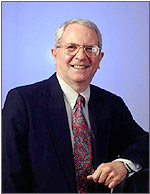 Truly became the seventh director of the 27-year-old national laboratory in May 1997. He also serves as executive vice president of Midwest Research Institute, the Kansas City-based research organization that, with Battelle, operates NREL for DOE. With his planned retirement from both positions, Midwest Research Institute will begin a national search for a new NREL director.

In a letter to staff, Truly said, "I honestly believe that it is at the intersection of our energy use, our environment, our economic well being and our national security that society finds the greatest engineering and scientific challenges on Earth today. Each of you at NREL are at the heart of this challenge and opportunity. What you do really, really matters to our nation and our world. I feel a deep privilege to have been a small part of your successes over these years."

"Richard Truly's leadership has significantly raised the visibility of the Laboratory during a time in which energy and our nation's security have become national issues," said John Kersten, manager of DOE's Golden Field Office. " He leaves a legacy that will propel the Laboratory's important work forward as the nation pursues new energy resources. Working with him has been a tremendous pleasure." The Golden Field Office manages the contract for the government-owned, contractor-operated laboratory.

Before joining NREL, Truly was vice president of the Georgia Institute of Technology, and director of the Georgia Tech Research Institute (GTRI) from 1992 - 1997. He was NASA's eighth Administrator under President Bush from 1989-92, and his career in aviation and space programs of the U.S. Navy and NASA spanned 35 years. He retired as a vice admiral after a Navy career of more than 30 years.

As a naval aviator, test pilot and astronaut, he logged more than 7,500 hours of flight. His astronaut career included work in the Air Force's Manned Orbiting Laboratory program, and NASA's Apollo, Skylab, Apollo-Soyuz and Space Shuttle programs. He piloted the 747/Enterprise approach and landing tests in 1977. He lifted off in November 1981 as pilot aboard Columbia, the first shuttle to be reflown into space, establishing a world circular orbit altitude record. He commanded Challenger in August-September 1983, the first night launch/landing mission of the Space Shuttle program.

Active in national and community affairs, he has served on the Board of Visitors to the U.S. Naval Academy, the Defense Policy Board and the Army Science Board. He is a member of the Colorado Governor's Commission on Science and Technology and a member of the Regis University Board of Trustees.

After his retirement, Truly plans to live in Colorado with his wife and family.

NREL is the U.S. Department of Energy's premier laboratory for renewable energy research and development and a leading laboratory for energy efficiency R&D. NREL is operated for DOE by Midwest Research Institute and Battelle.