Best Venture winners at the 27th NREL Industry Growth Forum on October 28–29 in Denver were, from left, Craig Hartwig, Lutz Henckels, and Guy Foster of HiQ Solar, which built a new-generation photovoltaic string inverter that promises to reduce the cost of commercial solar installations. Award winners will receive in-kind commercialization support from NREL to help increase their chances of becoming commercially successful.
Photo by Dennis Schroeder

The clean energy revolution is now, and the Energy Department is stepping up its commitment to help innovators commercialize their best ideas. At the recent Industry Growth Forum (IGF) in Denver, Colorado, Assistant Secretary for Energy Efficiency and Renewable Energy David Danielson announced the new Lab-Corps program to accelerate the transfer of clean energy technologies from the national laboratories to the marketplace, so that game-changing innovations don't languish for lack of money and equipment.

Hosted by NREL, the 27th Industry Growth Forum was the ideal setting to announce Lab-Corps, as the Forum attracts 30 companies a year competing for the top prizes, and dozens of others pitching their ideas to venture capital firms, large corporations, philanthropies, and national labs.

The global clean energy market is valued at $250 billion this year, but will expand to a multi-trillion-dollar market in the next decade, Danielson said. If the United States is to play the leading role, it will need to rely on its strengths—innovation and entrepreneurship—and avoid "short-term-ism" thinking by venture capitalists and others in the financial community.

This will require effort from all sides, Danielson said.

The Energy Department can—and will—help out in all these areas and will be the "glue" that helps hold together the new clean energy ecosystems, he said. "I'm confident that together we can build this new model, engaging corporations and philanthropy like never before, stepping up investments from government, helping venture capital find that sweet spot where they can make money while still supporting these technologies at the crucial stage," Danielson said. And national labs need to both generate and support innovations, speeding them to the marketplace. 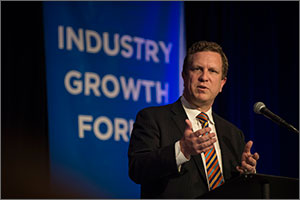 The Energy Department’s Assistant Secretary for Energy Efficiency and Renewable Energy, David Danielson, announces that NREL will be the leading lab for the newly funded Lab-Corps pilot program to accelerate the transfer of clean energy technologies from the national laboratories to the marketplace.
Photo by Dennis Schroeder, NREL

While news of the Lab-Corps announcement rippled through the Forum, it was business as usual for the inventors, entrepreneurs, investors, and venture capitalists looking to join forces to create the next big thing in clean energy. This year, the Forum's Best Venture award went to HiQ Solar for a solar inverter that weighs about one-third of typical inverters of the same power rating, costs less, and packs inside all the safeguards, reliability, and convenience that the solar industry is looking for.

HiQ CEO Lutz Henckels said he was born in Germany and doesn't like that Germany is ahead of the United States in percentage of renewables installed to date. "I don't buy the excuse that Germany has a newer infrastructure," he said. "America can absolutely regain the lead. The financing might be against us right now, but we have the innovators and entrepreneurs. We value startups."

Henckels said he has been to many similar industry growth forums, and the NREL-hosted one stands out because of the talent it attracts from both the public and private sectors. "Not many events compare to this…it's the best I've seen."

One Outstanding Venture award went to ClearCove Systems of Rochester, New York, which takes energy out of waste water in such a way that harvests more organics with four times more gas potential than other methods. "We use half as much power to treat waste," said CEO Gary Miller, who described his firm as "a blue-collar high-tech company."

"We're looking to monetize wastewater as a renewable energy source, and also as an economic value to the community," said Miller, who is seeking $4.5 million to scale up to the full production stage.

The second Outstanding Venture award went to Wetzel Blade of Pflugerville, Texas, which has a new way of building and manufacturing blades for the largest wind turbines. By breaking the blades into 60-foot sections, they can transport them at lower cost, and by assembling them in the field with a skeleton and skin, they can inspect the bonds beforehand and ensure there are no defects just before they are attached to the turbine.

"I can't even count the ways the Energy Department and NREL helped us get started," CEO Karl Wentzel said. "We got a half-million dollars to help get the technology out of the lab, and we worked with NREL on incubating a number of ideas. NREL will do our blade testing next year" at its National Wind Technology Center. 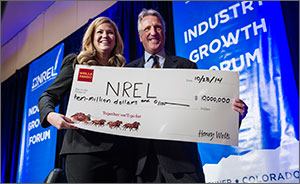 Ashley Grosh of Wells Fargo and Richard Adams, director of NREL's Innovation & Entrepreneurship Center, smile after the announcement of the $10 million Wells Fargo Innovation Incubator program that will be run by NREL.
Photo by Dennis Schroeder, NREL

Forum keynote speaker and NREL's Associate Laboratory Director for Energy Systems Integration Bryan Hannegan predicted that entrepreneurs, utilities, and national labs will soon find opportunity to reengineer the standard energy business models. In the not-distant future, electricity delivery will look more like the current cell phone model, he said. Verizon, AT&T, and the others no longer charge by the minute for phone calls, yet they remain profitable by offering a set of services and a flat fee rate that people value.

Similarly, utilities and their partners may soon be primarily selling electricity as a service—based on comfort, convenience, transparency, and choice. Households may pay a flat rate for the convenience of doing nothing, letting smart meters decide how to save a little money by starting the dishwasher when the peak electricity demand has passed, for example.

Other households might opt for more individual control—cell phone alerts, for example, asking them whether they want to donate the solar energy from their rooftops to the grid for the next couple of hours in advance of a thunderstorm heading their way. Or, asking whether they want to download electricity into their electric vehicles, or perhaps upload it when the demand—and the price—is at its peak.

Choices will be paramount, and the companies that succeed in the new era will be those that are nimble, creative, and have fingers on the pulse of the customers.

Lab-Corps to Be Housed at NREL, Help Transfer Innovations to Market

Hannegan invited Forum attendees to partner with NREL and the ESIF to learn how their devices will meld with the energy system of the future. And, new Energy Department programs like Lab-Corps will help accelerate the transfer of high-impact clean energy technologies from the national laboratories into the commercial marketplace. Lab-based teams will gain direct market feedback on their technologies and help develop startups, as well as industry partnerships, licensing agreements, and other opportunities. Part of the programs' funds will pay for a competitive process for choosing the best ideas and for work at the labs at crucial times in the products' development.

"The national laboratories are science and engineering powerhouses," Danielson said. In support of President Obama's Lab-to-Market Initiative, the Lab-Corps program encourages the entrepreneurial spirit of the national labs to bring new technologies to the market to advance America's leadership in clean energy. "These are exactly the kind of new, innovative ideas we need to build and expand if we are going to get to where we need to go."

NREL will leverage its deep expertise in technology commercialization and the cleantech sector to develop, deliver, and manage the Lab-Corps training program across the laboratory sites. Over the next year, NREL and the five satellite labs will assemble, train, and support entrepreneurial teams to identify private-sector opportunities for commercializing promising sustainable transportation, renewable power, and energy-efficiency technologies at the labs. Each Lab Corps team will receive comprehensive training and access to a suite of commercialization resources, including technology validation and testing, facility access, techno-economic analysis, and other incubation services.

Also at the Forum, Wells Fargo presented a $10 million check to NREL for the launch of its Innovation Incubator (IN2) program, which aims to foster the development of early-stage clean technologies for commercial buildings.

"Due to pervasive market barriers, private-sector financing is typically limited or unavailable to bring new energy innovations from early-stage laboratory research to proof-of concept prototype and on to full commercial scale," said Richard Adams, director of NREL's Innovation & Entrepreneurship Center. "This leads to market 'gaps' that prove too difficult for many early-stage companies to overcome, which often ultimately results in promising technologies falling to the wayside. We are hoping to address these barriers to benefit small companies, our communities, and the economy."

The first list of IN2 participants will be announced early next year; they will receive research and technology support, as well as help with their business plans, from the experts at NREL.

The Wells Fargo/NREL partnership is just another example of how NREL is supporting the burgeoning cleantech industry. Since 2003, the early-stage, pre-commercial, and expanding cleantech companies that have presented or networked at the annual Forum have collectively raised more than $5 billion in growth financing.

NREL's Deputy Laboratory Director for Strategic Program and Partnerships Bobi Garrett  said: "What is so gratifying about putting on this Industry Growth Forum each year is the consistent feedback we get from the investors that the entrepreneurs and presenters are doing a really great job. The quality of companies that come to this event is really outstanding."