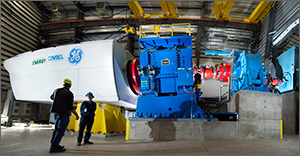 Premature failures of mechanical systems have a significant impact on the cost of wind turbine operations and thus the total cost of wind energy. Recently, the Energy Department's National Renewable Energy Laboratory (NREL) took a giant step forward in the quest for more reliable, lower-cost wind power with the addition of the new 5-megawatt (MW) Dynamometer Test Facility at its National Wind Technology Center (NWTC). The new facility dramatically expands the capability of NWTC engineers and their industry partners to verify the performance and reliability of wind turbine drivetrain prototypes and commercial machines.

The facility is capable of testing drivetrains up to 5 MW—large enough to test virtually any land-based turbine—and employs dynamically variable loading capabilities that will allow researchers to better simulate conditions a turbine might experience in the field.

"These new capabilities make this a very special facility, one of the largest and finest of its kind in the world," NWTC Director Fort Felker said. "It gives NREL an enhanced ability to do comprehensive testing of modern multi-megawatt wind turbine systems in a laboratory environment to verify their performance and reliability before they are widely deployed."

A Cutting-Edge Test Facility for the Future of Wind Energy 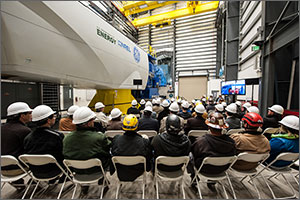 A dynamometer system replaces the rotor and blades of a wind turbine and allows researchers to control the turbine drivetrain's mechanical and electrical systems while simulating normal and extreme operating conditions. Historically, this testing has been done under torque (rotating) loads only. The new state-of-the-art facility at the NWTC, funded with the support of the Energy Department and the American Recovery and Reinvestment Act (ARRA), incorporates a non-torque loading system into the testing regimen, a hydraulic device that allows for simulation of both the rotational and bending loads that a wind turbine rotor places on a drivetrain.

"The non-torque loading system is what really sets this facility apart from other comparable test sites," NWTC Dynamometer Project Manager Mark McDade said. "This allows us to test the drivetrain system with the types of loads that it will see in a real-world application. It's a very important feature for a test apparatus because the adverse impacts these types of loads can have on a system are significant."

The system features a 6-MW motor, which provides the power to a turbine during testing. The motor turns at very high speed and low torque. The motor drives a gearbox, which transforms the output to the high torque and low speed that is appropriate for a wind turbine drivetrain. This provides the rotating loads on the test article.

Add to this motorized torque testing the non-torque loading capability unique to the NWTC, and NREL is able to put a wind turbine drivetrain through the most realistic loading tests possible in a laboratory. 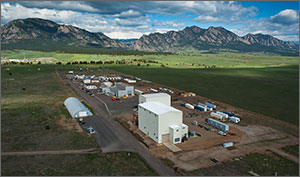 Shown here in the foreground, the 5-MW Dynamometer Test Facility is the newest addition to the NWTC's test facilities.
Credit: Dennis Schroeder

Dynamometer testing is used by industry to confirm proper operation and reduce the risk of deploying wind turbine prototypes before they are put into service. By reproducing operating conditions in a laboratory environment, engineers can verify the performance of a turbine's systems, including generators, gearboxes, power converters, bearings, brakes, and control systems. Conducting these tests before  deployment is important because unanticipated failures can be detected and corrected early in the development process, leading to a lower cost of ownership for wind farm operators—and ultimately lower-cost wind energy for the consumer.

"These machines are expected to operate reliably in the field, often in harsh conditions, for 20 years or more," Felker said. "The ability to comprehensively test these systems in the lab, to verify their reliability and performance before they go into service, is a critically important capability for the wind industry."

The first tests being done at NREL's new dynamometer facility are on a 2.75-MW wind turbine the Energy Department acquired in partnership with General Electric (GE). The GE system is being used for the calibration and commissioning of the testing equipment in the facility, which will also provide the industry partner with useful data on this particular turbine model.

"The only way to deliver advanced technology at a lower cost of energy with high reliability is to be able to test and learn," GE Senior Manager for Wind Technologies Tom Fischetti said at the dedication event for the facility. "Being able to do that here at ground level instead of in the field, 300 feet in the air, is very important to GE and the rest of the wind industry. This is state-of-the-art technology, and we are excited to be able to partner with NREL and the Energy Department by being the first user of the facility."

Helping the Power Grid and Wind Turbines Work Better Together 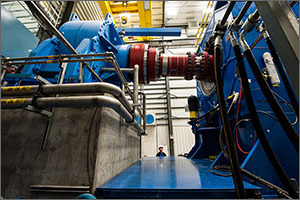 A visitor looks at the high-speed driveshaft on the new dynamometer at the NWTC's 5-MW Dynamometer Test Facility.
Credit: Dennis Schroeder

Another important new capability that enhances the value of the work being done at NREL's 5-MW Dynamometer Test Facility is the Controllable Grid Interface (CGI), a powerful energy systems integration tool that allows engineers to precisely control the electrical grid conditions that a test article will see.

The CGI simulates various grid disturbances, such as over-voltage or under-voltage events, allowing engineers and industry partners to determine how grid-connected systems will react to these events in a controlled environment. This type of testing—performed offline from the grid, but simulating a real-world grid environment—enables users to verify performance, assure compliance with standards, and understand failures in a fraction of the time and cost that it takes to perform similar tests in the field.

The CGI can also help engineers determine how these systems will be able to provide ancillary services to the grid, as well as test and optimize the grid-integration-related performance of a unit before it is deployed.

"This is a significant capability for NREL, and one that is very complementary to the work that will be done in the dynamometer," McDade said. "As more and more renewable energy generation and storage technologies are added to our electricity mix, it is critically important that we understand how these systems will perform on the larger electric grid, how they will react to disturbances, and how they will be able to provide benefit to the grid from a systems integration standpoint."

The CGI can test not only the integration performance of wind turbines, but also that of a wide variety of grid-integrated energy systems, such as utility-scale solar photovoltaic (PV) generation, PV inverters, and energy storage systems.

Working Today Toward the Technologies of Tomorrow

In addition to enabling deployment-readiness testing, the new NREL test facility will be able to examine future technology innovations, such as advanced drivetrain systems, that promise to usher in the next generation of higher-performance, lower-cost wind turbines.

Research at the facility will accelerate the development of new wind energy technologies, providing an opportunity to verify the concept and performance of prototype technology improvements at the pilot level before moving them into the marketplace.

This capability will allow research engineers to test a specific component, such as a generator or a gearbox, within the scope of a full system, to confirm that it meets its performance, efficiency, and reliability goals before introducing it into the operating fleet of wind turbines.

The NWTC has continued to grow its testing capabilities over time to meet the ever-expanding needs of the wind industry. This is the third dynamometer test facility at the laboratory, adding to the existing capabilities of previously installed 225-kilowatt and 2.5-MW test systems. The two smaller systems have directly contributed to the growth of the higher-performance, lower-cost, and more reliable wind turbines seen in use today. The new 5-MW facility is the next step forward toward even larger wind systems with increased performance expectations.

"Important basic R&D will be done in this facility to answer the key engineering questions that will allow us to develop the next generation of wind turbine technology," Felker said. "We need to continue to push the cost of energy down while at the same time improving the performance and reliability of these systems. A laboratory environment such as this, where we can seek the answers to these questions is an important step toward meeting those goals."