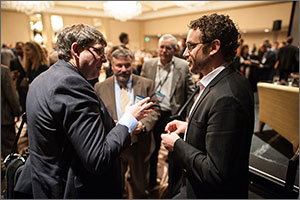 A company that can generate electricity using low-temperature waste heat was the big winner at the recent 26th annual Industry Growth Forum in downtown Denver, a gathering of people who have no qualms about making money while helping to build a more sustainable world.

The annual gathering sponsored by the Energy Department's National Renewable Energy Laboratory (NREL) brings inventors and entrepreneurs together with investors and venture capitalists to spark courtships that can lead to the next big thing—a taller wind tower, a better battery, a way to use enzymes to detect chemicals in the fracking process, a more efficient solar cell. This year, nearly 400 attended the two-day event at Denver's Grand Hyatt Hotel on December 3 and 4.

Innovative ideas, sustainable solutions, and startlingly simple, outside-the-box, almost-ready-for-market products for reducing greenhouse gases and turning profits abounded. Attendees remarked on how the presentations continue to mature, as they wend their way from the research lab to pilot scale, then manufacturing scale, and on to the marketplace. Pie-in-the-sky didn't make the cut, but rational solutions won raves.

Expert panels of judges assessed the 30 best innovations; they heard 10-minute presentations and asked questions for another 10 minutes. Dozens of other companies presented their ideas to investors in short, one-on-one bursts, in the sustainable energy world's version of speed dating. Examples: a four-person start-up needs $250,000 to sustain it through building a prototype; a 16-person company needs $2.5 million to crank up to manufacturing scale.

Money Goes to Ideas That Show a Clear Path to Profits 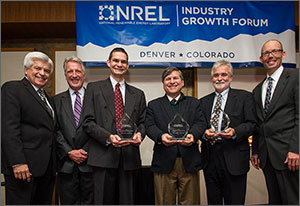 Potential investors wanted to see not just crisp, clean presentations, but true opportunities to make money with new green technologies. And they saw them in spades.

There was Keystone Tower Systems of Massachusetts, which has devised a way to build tapering towers for wind turbines right at the wind farm. If that doesn't sound like much, consider that it is near impossible to transfer wind towers more than 80 meters long across the nation's highways, because the diameters of higher towers would rise too high on the truck bed and smash into overpasses.

Keystone's solution is to have trucks ship flat, trapezoidal steel plates to the wind farm, where the company runs them through a machine that will turn them into conical shapes with a continuous taper. That way, they can grow as high as 160 meters and still be made of just one-inch-thick steel—much more cost-effective than the three-inch steel and tons of extra concrete that would otherwise be needed to make such tall towers.

And why, the panelists wanted to know, is it so important to grow wind towers that high? Keystone CEO Eric Smith had the answer: In the eastern half of the nation, where hardwood trees grow tall, shorter towers aren't efficient because the trees block the wind. Sturdy, cost-effective 160-meter towers can bring reliable wind power to that half of the nation, boosting wind energy production by 38%while lowering costs by 20%, Smith said.

Keystone didn't win one of the three grand prizes at the Forum, but like a lot of other companies that made presentations, it garnered plenty of interest from the investment community.

Companies Presenting at Forum Raised More Than $5 Billion since 2003 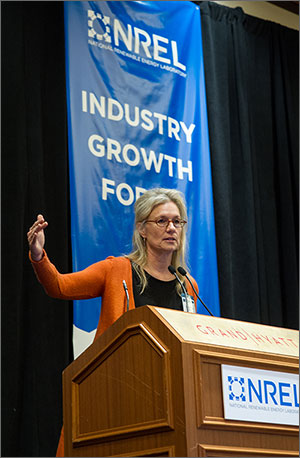 The winner of the Best Venture award was Ener-G-Rotors, Inc., a New York company that sells devices that make it economically viable to generate electricity from low-temperature heat. Every year, billions of dollars of energy are thrown away in the form of waste heat, CEO Michael Newell told the judging panel made up of scientists, engineers, and investors. The Energy Department has identified waste heat as the number one opportunity for industrial energy efficiency—a potential $6 billion annual market. Ener-G-Rotors uses expanders to generate electricity from a lower temperature than was previously possible. The company got initial funding from the New York State Energy Research and Development Authority, but is now looking for private capital to expand its manufacturing.

Outstanding Venture awards were given to:

OptiEnz Sensors, LLC, a startup using research from Colorado State University, puts enzymes on biosensors to detect chemicals in water. The method can be useful in the 600,000 fracking wells in the country, and can also be applied to the dairy, food, and beverage industries.

In the fracking process, eight to 10 barrels of water are used for every barrel of oil or gas equivalent harvested from the wells one to two miles below the surface, OptiEnz CEO Steve Witt said. That water can be contaminated with benzene, xylene, methane, or other organic chemicals. "Rather than waiting a week for results, we can offer continuous in-place monitoring, with immediate results and an 85% reduction in annual costs."

The device sends light down a fiber-optic cable to a sensor tip that is coated with a fluorescent dye embedded with different enzymes for each possible organic chemical. The change in the light that's reflected back indicates the presence and concentration of different chemicals.

OptiEnz was looking for $750,000 to complete its business development and expand its in-house manufacturing of the sensor tips. Witt, like other presenters, outlined the timeline to profitability, the possible return on investment, and an exit strategy—what kind of company might acquire the six-person startup, and when.

Fabriq, another Colorado-based company, has found a way to make energy monitoring cost effective for smaller buildings by placing the software in the cloud. CEO Mark Verheyen said the cost falls from a prohibitive $2.75 per square foot to a manageable $1.10 per square foot for the 95% of buildings in the United States that are less than 50,000 square feet. He said the average smaller building can then save $14,000 per year in lighting costs by taking advantage of motion detection, dimming, and other features enjoyed now by larger buildings. Fabriq built its business model on an energy monitoring system first developed at NREL.

Many attendees said the annual trek to Denver is a must-do.

"I like to come here to see where the investment money is going, and see what the trends are," said Chet Kolodziej, executive director of the non-profit Freedom Field, which supports renewable energy projects in northern Illinois. "Five years ago, most of the presentations were on solar, and made by CTOs. Now, more people from the business side are making the presentations—that shows a maturation. In terms of the technology readiness levels, where 1 is a laboratory idea and 10 is a product you can buy at Walmart, the ideas here are about a seven or eight. They're what I'd call pre-commercialization."

A year ago, Doug Hutchings was a 29-year-old recently minted Ph.D. trying to raise money in the one-on-one "speed dating" process at the Forum. This year, he was back as a presenter, touting his company, Picosolar, which has a hydrogenated super-emitter that reduces the need for silver on solar cells, while increasing efficiency. He told the judging panel that the benefits are worth $140 million a year to a typical manufacturer.

Hutchings' breakthrough with Picosolar won a SunShot Initiative award from the Energy Department.

Hutchings said he was encouraged by feedback at the Forum and hopes to leverage $1 million in federal funding to get $2 million from private investors. "It's a wonderful audience here," he said. "If nothing happens with the first interaction, you're at least setting up a process for engagement. You follow up; you don't want to play too easy to get."

Asked if he is likely to be a serial entrepreneur or stick with his current company, Hutchings laughed and said: "Right now, I just want to make the transition from entrepreneur to successful entrepreneur."

Farris said Forum turnout was greater than that of the previous year, and the quality of presentations was outstanding. He said the green energy industry is at a good spot on the "hype curve. When things get overhyped, there is irrational exuberance, then a fall to a trough. That's when the really strong companies, the ones that are more viable, come in. That's where we are now. Investors are commenting on how strong and prepared the presenting companies are, and on the soundness of their business models. We're seeing more variety now—battery storage, energy management, water management, building technologies, as well as photovoltaics. Year to year, the Forum helps you see what's happening in the clean tech sector."

NREL Director Dan Arvizu said the tough marketplace and the exit of many companies from the clean energy sector forced a maturing of the industry. Presenters this year are the cream, having proved their resilience. The Forum bringing together researchers and marketers helps speed innovations to the marketplace, Arvizu added. Without it, important networking wouldn't take place. "The relationships built and information shared at the Forum are vital to the advancement of clean energy technologies."