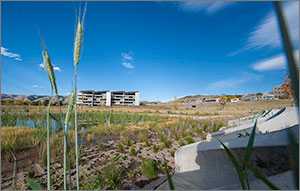 Americans have become increasingly familiar with the Leadership in Energy and Environmental Design (LEED®) designation for buildings from the U.S. Green Building Council (USGBC). LEED gives building owners and operators a framework for implementing green building design, including energy efficient solutions. But what about the land outside of the building?

The Energy Department's National Renewable Energy Laboratory (NREL) was selected to join the pilot program for the Sustainable Sites Initiative (SITES)—a new certification system for sustainable landscaping. Not only did NREL participate in the pilot, but the lab recently joined 15 other projects that have received SITES certification for sustainable site design, construction, and maintenance. NREL's rating came in at three out of a possible four stars.

"For buildings, we tend to concentrate on LEED certification, which is great from a structure standpoint," NREL Senior Sustainability Project Manager Michelle Slovensky said. "The SITES certification was developed because the industry felt there weren't standards that cover the horizontal aspects of a project. Not only should your building have a sustainable and efficient design, but so should your infrastructure and your landscaping."

SITES is a partnership between the American Society of Landscape Architects (ASLA), the Lady Bird Johnson Wildflower Center at the University of Texas at Austin, and the United States Botanic Garden. The USGBC is also a stakeholder in the program, and anticipates incorporating the SITES guidelines and performance benchmarks into future LEED green building rating systems. The pilot that NREL participated in included 150 projects from 34 states.

The new SITES program fits well with NREL's mission to "walk the talk," and the lab had the opportunity to participate in the pilot thanks to the recent construction of its Research Support Facility (RSF) and the accompanying garage and storm water management systems.

"We felt that if we have the highest-performing buildings, we should look at our campus to find ways it can be used as an example of a sustainable campus and living laboratory," Slovensky said. 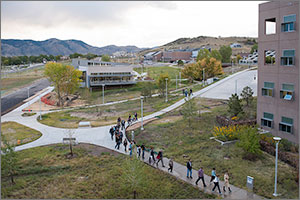 While LEED seeks to minimize the carbon footprint of buildings, SITES demonstrates how a landscape can actually sequester carbon and regenerate living systems. But building those systems requires careful site management planning—from day one of the project.

"It's not a whole lot different than LEED in that when we were looking at the design of the RSF, our mindset was that we were going to build the most energy efficient and sustainable building possible; the SITES program extends that mindset to include the building and the site," Sustainable NREL Director Frank Rukavina said.

"For someone new to the design process, it's a good thing to think about all of the planning that needs to go into sustainable site development at the beginning of the process, and not at the end," Slovensky added.

A Pond That Is Not Just a Pond 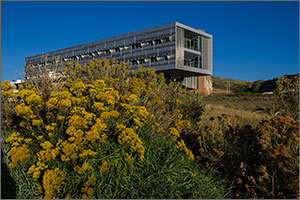 According to the Sustainable NREL team, "from a vegetation standpoint, it's all about stewardship." Safely eliminating weeds from NREL's site keeps them from spreading into the adjacent neighborhoods.
Credit: Dennis Schroeder

"This was a big step for us because our project site previously had no managed landscaping," Slovensky said. "With all of the recent construction, there was a large amount of disturbed land that we are bringing back in the most sustainable way possible.

"Often, when people look at native landscapes, they think they understand the ecosystem, but instead they produce a garden. Where I think NREL has been successful is that we have built something that has become its own self-sustaining ecosystem. It can thrive on its own."

Landscape aside, a large part of the NREL SITES project was a new system for managing storm water from new buildings, parking lots, roads, and other impervious surfaces. But this doesn't look like just any detention pond.

NREL's pond covers more than five acres and can detain more than 3 million gallons of storm water. It's also a habitat for migratory birds, including western bluebirds, robins, Bullock's orioles, and spotted sandpipers. NREL staff enjoy seeing regular visits from deer as well as the occasional coyote and red fox.

But the real purpose of the detention pond is to handle storm runoff by discharging water into three forebays, which reduce water flows and trap sediment and debris. The water then slowly progresses through a series of shallow basins, where native plants biodigest excess nutrients such as nitrogen and phosphorous. The shallow marsh at the south end of the pond is a wetland that receives moisture in the spring, but may be dry during much of the year. Spring moisture promotes the growth of water-loving plants and, in turn, aquatic insects, which feed the swallows, nighthawks, and bats.

Not only is the area designed as a wildlife habitat, it is a unique amenity for NREL staff, as it includes a looped trail that is one-third of a mile long.

"One of the things the SITES program looks at is innovation, and the storm water pond was a significant example of this on NREL's campus," Slovensky said. "Most people would have just put a hole in the ground and called it good. We set it up so it looked like a park first, even though its primary function is storm water retention. It not only protects from flooding, but it cleans the water as well."

Building with the Land in Mind 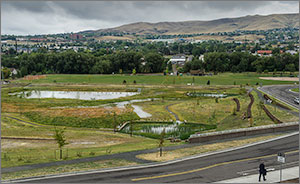 Low-impact campus build-out strategies that promote walkability and interaction on campus are another part of NREL's SITES planning. Construction was completed in October 2011 for the 361,000-square-foot LEED Platinum RSF, which is "home" to 1,325 employees. The RSF's rooftop solar photovoltaic array helps offset the building's annual energy use, and it is a net-zero energy facility. The SITES project scope also included integrated campus transit, pedestrian LED site lighting, prairie restoration, and expanded campus utilities.

"NREL's philosophy on sustainability is to operate the lab with the least impact on future generations," Rukavina said. "We had a great opportunity with all of the recent construction on NREL's campus to do everything as 'right' as we could—and this included integrating our new building and landscaping into the existing ecosystem."

Other RSF-related features that were considered as part of the SITES designation include:

"The SITES program helped us take a new look at our plans for a sustainable campus so we could refine what we were doing," Rukavina said. "As a result, we have three projects that are moving forward as part of a living laboratory concept, including the stewardship of the wildlife corridor that goes through the campus, tracking a successful reestablishment of the plant community, and water quality monitoring. We are required to not only monitor these items but also publish results in a journal, which matches up nicely with the science side of the lab's mission."