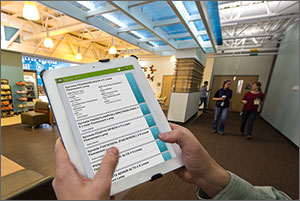 NREL Engineer Nicholas Long uses simuwatt Energy Auditor on his iPad to audit the lighting in a café on NREL's campus. The tool performs a building audit much more quickly and inexpensively than traditional methods, and allows for mobile, onsite data collection and storage, as well as 3D visualization capability.
Credit: Dennis Schroeder

An energy audit tool that more accurately pinpoints potential energy savings while potentially costing 35% to 75% less than traditional audits is set to hit the multi-billion-dollar energy retrofit industry next year.

The commercial buildings sector in America alone represents 7% of total energy consumption worldwide. Commercial buildings in the United States consume about $134 billion in electricity each year for lights, computers, office machines, appliances, and the like, according to the Energy Department's Buildings Energy Data Book. Even a modest reduction in electricity costs would mean huge savings.

At the individual building scale, a 200,000-square-foot office building that pays $2 per square foot in energy costs annually can save tens of thousands of dollars of net operating income by reducing consumption modestly. And that doesn't include the benefits of reducing greenhouse gases and increasing the comfort level of building inhabitants. 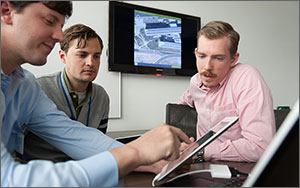 For many building owners, conducting energy audits is about as fun as a trip to the dentist. That's why they usually leave it to the professionals — the energy service companies, or ESCOs, that absorb the costs of the audit in order to spotlight possible energy and cost savings. Then, the ESCOs make improvements at low cost, in exchange for a share of the money saved on monthly utility bills.

It's a model that works primarily for large buildings today. Traditional audits can be cost prohibitive for small buildings, and with margins thin, ESCOs have little incentive today to absorb those costs due to lower total savings potential. simuwatt Energy Auditor offers to change this equation. It will allow ESCO employees to perform audits simply using mobile tablets and advanced energy modeling, skipping the laborious steps of manual input and transfer. "The hope is that by lowering costs, you can not only get deeper savings but also get into more buildings," said NREL Engineer Andrew Parker.

When the audit is finished, it is stored electronically and serves as the baseline for the next audit, which is typically done a few years later. "The subsequent audit becomes verification, not a new discovery," said NREL Senior Engineer Larry Brackney. "So, the cost of subsequent audits comes down sharply."

A Melding of Several Ideas 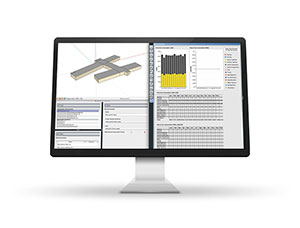 Lars Lisell, an NREL engineer who works to deploy research ideas into the marketplace, said simuwatt Energy Auditor is "a combination of a bunch of different ideas that fit together very nicely. We came up with the idea of marrying the energy audit with energy modeling through OpenStudio and other tools. We'd already been working with concept3D on buildings software."

"NREL's deployment program had been doing energy audits for the Department of Defense, the Department of State, the National Park Service, and other federal agencies for quite some time," Lisell said. "When you spend a lot of time doing something, you start to notice that there inefficiencies along the way — and realize there's a better way to do them."

concept3D, which pulled together the idea of capturing the geometry of a building by taking photos of the exterior, then layering those on top of a three-dimensional rendering of the building, has an exclusive license from NREL to develop the software tool for the marketplace.

simuwatt Energy Auditor benefits from existing tools, including the Energy Department's EnergyPlus, which runs simulations to determine energy flow; and NREL's OpenStudio, which allows users to quickly create a detailed EnergyPlus model of the building. EnergyPlus, which models heating, cooling, lighting, ventilation, and other energy flows, was developed by NREL along with other national labs and research institutions.

NREL also tapped into concept3D's work to help develop and grow its Building Component Library (BCL). The BCL is an online archive of building energy modeling input data and conservation measures that can be used to create building energy models. The wealth of information helps narrow down how much savings can be expected in a particular type of building from, say, installing more efficient lighting systems, or replacing windows.

simuwatt Energy Auditor incorporates a model that lets users drag BCL components into an OpenStudio project. "They then can see the energy and cost impacts," Brackney said. Users can simulate the effects of adding overhangs to windows, changing rooftop units, changing lights, changing hours of operation — almost any building component that could improve efficiency.

simuwatt Energy Auditor can also measure the benefits of installing solar photovoltaic panels. "This would not be possible without OpenStudio and the BCL — that's why no one has done this before," Brackney said. "These are enabling technologies that we've developed here at NREL."

The melding of different capabilities was further enhanced by the growing popularity of electronic tablets. OpenStudio and the BCL have datasets that are ideally suited for electronic data collecting, and that allow the user to manipulate the numbers to see how big the savings can be.

For example, a user could pose the question: "Does it make economic sense to retrofit windows in this building?" The response from simuwatt Energy Auditor might be something like this: "Yes, if it is more than three stories high and at least 40 years old and if you use these kinds of windows." And if that's not in the budget, then the user can change one parameter and see what difference it makes for the bottom line.

No other commercially available product has the ability to collect building data onsite, automatically move the data into an analysis tool, and perform a detailed energy simulation with the speed and consistency of simuwatt Energy Auditor. "With most audits, you're not quite sure what you're getting — you can get a big range," Brackney said. "With simuwatt Energy Auditor, you get the same numbers every time." And ESCO engineers can quickly train their junior engineers to use the tool.

Instead of hiring one person to do the audit and another one to, say, assess the strength of the roof for the loading of solar panels, with simuwatt Energy Auditor, the same person doing the audit can assess the value of the photovoltaic modules. And huge computers aren't needed to analyze the data, because while it can be analyzed locally, it also can be sent out to the cloud. "Cloud computing changes the game for running energy models and accessing data from any device, at a lower cost," Davis said.

Beyond the "Low-Hanging Fruit"

The first tests of simuwatt Energy Auditor will be completed at six Department of Defense sites:

simuwatt Energy Auditor's built-in reporting mechanisms and assumptions provide much more useful information to decision makers, said Parker. Often, an audit will report that, say, lowering lighting density will save so many dollars. But a building owner needs to know what assumptions were made, how the costs break down, and how this will impact the operations of the building. Without that information, an energy audit can seem useless to building managers. "At every step, we can assemble the information that the accountants want to know — replacement costs, how long the bulbs will last, every detail," Brackney said.

Brackney noted that when it comes to energy retrofits, "all the low-hanging fruit has largely been plucked. Everyone has changed the light bulbs, the air filters. What's left to do is pretty capital intensive."

That means due diligence is essential — both to satisfy the building owners and to convince lenders, who must know the precise payback in energy savings on the loan. "Existing auditing processes aren't reliable enough or cheap enough for people to use them to get those answers," Brackney said. "So, they're not making investments to get to that next level of energy efficiency."

NREL, concept3D, and industry partners will test the potential savings from the tool by auditing 18 buildings at six Department of Defense bases.

Interest is strong from ESCOs and other private-sector auditors eager to test simuwatt Energy Auditor. "Over the next six to eight months, we'll get a pretty good collection of actual data to compare with pre-existing audits, or conventional audits we do in parallel," Brackney said.

"The consistency of the measures is so important," Parker said. "Whoever creates a measure has to understand engineering, but once that's done, anyone can come in with any model, drag it in, and get reasonable results."