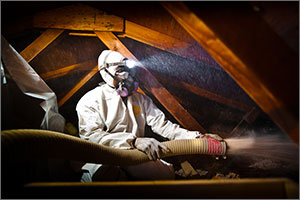 William Stewart with Veterans Green Jobs blows cellulose insulation in the attic of a home A recent collaboration between the Energy Department, NREL, and the home energy performance industry is supporting the weatherization workforce with consistent on-the-job tools and accreditations that lead to better-defined career paths.
Credit: Dennis Schroeder

Getting up and going to work is hard enough every day. But add to your burden the need to remember every step of your job down to the smallest detail — and the fact that if you want to change careers, your lack of credentials might mean starting from scratch. These are the challenges faced by many of the weatherization professionals working to make U.S. homes more energy efficient.

A recent collaboration between the Energy Department, its National Renewable Energy Laboratory (NREL), and the home energy performance industry is seeking to change this by supporting the weatherization workforce — for which demand has exploded in recent years — with consistent on-the-job tools, accredited training programs, and credentials that lead to better-defined career paths.

The Energy Department's weatherization program has been in existence for more than 30 years and has provided weatherization services to more than 6.4 million low-income households, reducing building energy use by 36%. To shepherd the weatherization industry into a new technological era, the Department's Weatherization Assistance Program (WAP), with support from the WAP National Training and Technical Assistance Plan, introduced the Guidelines for Home Energy Professionals project — and with it, three goals:

Three years ago, NREL was tapped by the Energy Department to lead the project, and the end result was a new tool for weatherization professionals —Standard Work Specifications (SWS). SWS define the minimum requirements needed to ensure that the work performed during energy upgrades in single-family, multifamily, and manufactured homes is effective, durable, and safe.

"NREL was chosen because of our ability to bring industry together for market transformation activities," NREL Principal Lab Program Manager Dan Beckley said. "The industry wasn't going to invest in creating a document like this because it's not organized in that way. It was a great role for NREL to bring in existing partners and then parlay that into an industry effort."

The SWS can be used as an industry guide for workers, training instructors, homeowners, and program administrators involved in the home performance industry. In addition, the Energy Department is working to mandate that all WAP-funded weatherization efforts be inspected by a certified quality control inspector. The new Home Energy Professional Certifications require home energy professionals to demonstrate comprehensive and technical proficiency in the four most common job classifications in the home energy upgrade industry: energy auditor, retrofit installer technician, crew leader, and quality control inspector.

Collaboration from the Get-Go 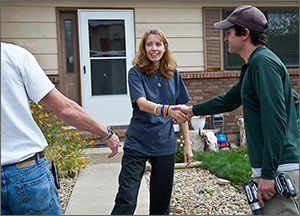 Steve Lemaire (left) and Zump Urycki (right) are thanked by Tammara Thayer, whose home they are auditing in Loveland, Colorado. Thayer is participating in an Energy Department program that assists homeowners with weatherizing their homes. Soon, weatherization customers will be able to seek out contractors with the program's new Home Energy Professional Certifications.
Credit: Dennis Schroeder

According to the project team, before launching the SWS there was no go-to source on how to go into a house, retrofit it, and walk away recognizing that the job was done right.

"When we started the project three years ago, it was somewhat unprecedented. We initially brought together well over 100 experts to draft up the first of what these standards would look like," Beckley said. "This wasn't a lab exercise where we said, 'We think we know what's best'; rather, this was driven by industry. It was for industry, by industry — we simply were the facilitators and provided some technical expertise.

"We broke out the work activities into the sections of the house. For instance, if you are going to seal an attic, we want to make sure that as you come down the ladder, you know what the outcome should be. These standards don't tell you how to do the work; industry has its own standards and best practices."

NREL Project Manager Chuck Kurnik also noted: "We solicited all of industry for comments on the SWS, including industry associations and trade groups. We feel that all the industry feedback helped to make it a stronger document. Every time we would do a public comment period, the document would become stronger."

Over a three-year period, NREL had more than 300 industry professionals involved in the development of the SWS.

Shortly after the creation of the SWS, a new online SWS tool was in the works and launched in the last few months.

"One of the functionalities of the tool is that as a crew leader approaches a house, they will have a scope of work so they can hand out checklists to their crews," Beckley said. "The tool has a 'Favorites' functionality that allows you to identify and store details associated with any part of the house you are going to touch on that given day. Then you can go ahead and send those details via email to a mobile device, so workers have in their hands clear expectations for the expected outcome. And with the checklist, they can make sure before they walk away that they accomplished the task at hand."

NREL also developed an application programming interface (API) that is publicly available. Companies can take the API and integrate it into the tools that they develop for their employees — which could be handy for the industry partners integrating SWS guides into their training.

Industry Immediately Puts the SWS to Use 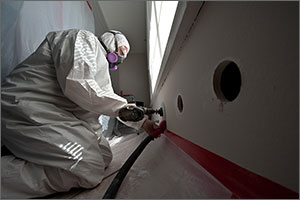 Amanda Evans, director of the New Mexico Energy$mart Academy, is using the SWS as part of an accredited training program for weatherization work.

"We like to put students in pairs and give them something they think they know how to do and ask them to write all the steps down in as much detail as they can," Evans said. "Once they've done that, we'll pull up the SWS, and they go through and see what they got and how many they missed. It's a tool to show them how their memory isn't as effective as using something that is clearly written out. We talk about how even pilots and doctors have checklists for their work."

Austin Energy is looking to revamp its multifamily rebate program, and for this municipal utility, the timing of the development of the SWS couldn't have been better.

According to Jaime Gomez, coordinator for Austin Energy's multifamily rebate program, his team was recently reviewing old notebooks from when the program was first developed. They discovered that all of the forms and information had not changed since the early 1980s.

"We realized that everyone has caught up to what we are doing; we decided the time had come to change up our program," Gomez said. "We've come up with a new way of thinking about how we are doing things. We decided to include a stringent handbook with the use of registered contractors. Along with that handbook, we need technical specifications, and it was going to be really difficult for us to come up with all of that on our own. This cut our workload considerably — maybe by more than half."

Austin Energy is looking to launch its new multifamily rebate program this fall. "The fact that there is an online resource that includes very detailed work specifications, and to be able to just click and choose whichever ones we want to use and then include them in our handbook, is just phenomenal for us," Gomez said.

The SWS are intended to serve as a universal resource for the home energy upgrade industry and to ensure that everyone can speak the same language and have the same expectations around work. In addition, these specifications serve as the basis for the new Home Energy Professional Certifications.

"More than half of U.S. states require certification for retrofit work, so there is a precedent for the weatherization market and retrofit market to maintain and hold certifications," Beckley added. "These certifications are also transferrable nationally, so we're now creating a more mobile workforce. Now, if there is a natural disaster somewhere, workers looking for employment have the skills and ability to help rebuild in another state."

The goals of the new Home Energy Professional Certifications are to provide weatherization workers with a logical progression for advancing their careers and businesses.

"The consumer is going to see an impact in consistently higher-quality work," Kurnik said. "And the worker is going to appreciate it because they can now distinguish themselves from rogue contractors who are not investing in their workers."

Other anticipated benefits of the professional certification program are improved service delivery, fewer callbacks, and reduced installation errors, which in turn should drive new business by delivering consistent performance that builds consumer value and trust.

"The program lends credibility to the growing weatherization industry, and as a result, it becomes recognized as its own industry," Kurnik added. "This program should help the owners of these companies retain their workforce and gain market credibility."