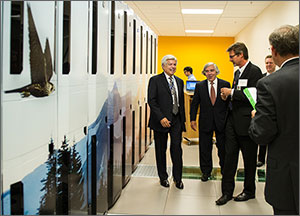 The ESIF "will be a major focus of DOE to help us transform the energy system to the one we need in 2030," Moniz said before a packed crowd of scientists, policymakers, and industry leaders at NREL's Golden, Colorado, campus.

Moniz, who was confirmed as Energy Secretary in May, said tremendous advances in wind, solar, and fuel cell energy have pushed those technologies to the threshold of being major presences on the nation's electricity grid.

However, that presents a challenge because solar and wind are intermittent resources. And that challenge is complicated by increased severe weather events such as Hurricane Sandy that knocked out power in 21 states last year, Moniz said, emphasizing the need for a more resilient infrastructure in the near future. 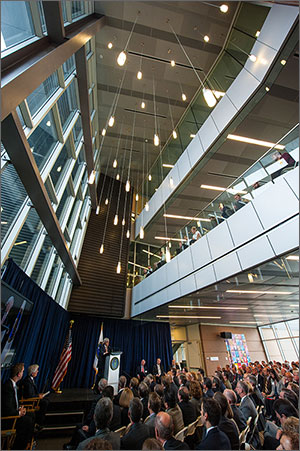 The Secretary's first weeks on the job coincided with President Obama unveiling his Climate Action Plan, which focuses on doing more to address the risks of climate change. "I said that first day, 'I'm not here to debate the undebatable,'" Moniz said, referring to the strong belief among almost all climate scientists that the Earth is getting warmer due in part to fossil-fuel emissions in the atmosphere.

So now the nation's focus must be on energy integration — on delivering distributed energy to the grid when the sun shines and the wind blows, while keeping it as reliable as when the grid was a one-way delivery system of fossil-fuel-based energy, Moniz said. The new ESIF is "the step up we need to elevate the focus on energy systems integration."

The ESIF will also play a key role in helping regional utilities design resilient microgrids that will bring back power almost immediately to communities that now are bathed in darkness when storms such as Hurricane Sandy hit, Moniz said. "We need to reap the benefits of our tremendous technological advances to start developing solutions for our energy system."

Just before his talk, Moniz pushed a button that inaugurated the ESIF's high performance computer Peregrine, which can do more than a quadrillion calculations per second and is integral to the ESIF's capabilities.  Peregrine supports NREL's research into energy systems integration, renewable energy research, and energy efficiency technologies, and will lead to increased efficiency and lower costs for clean energy technologies. NREL teamed with Hewlett-Packard to develop the supercomputer.

Paul Santeler, vice president of the Hyperscale Business Group at Hewlett-Packard, said the collaboration with NREL on the high performance computer and  data center was the best partnership he's been a part of because both the company and laboratory learned so much — knowledge that will help other data centers go deep green. The data center for the Peregrine supercomputer in the ESIF is unique, because it uses the excess heat generated by the computer to warm water, and then uses that water to heat the entire building.

"When Steve Hammond [director of NREL's Computational Science Center] told me wanted to put in a petaflop-scale high performance computer, and that he wanted to cool it with warm water and use that water that comes off to heat the building, and then use the excess heat to warm the cement outside, I said, 'Riiight,'" Santeler said. "We were doing something very unique and different — breaking boundaries. But the bottom line is, we nailed it. And we're making it commercially available so others can take advantage."

Moniz got a firsthand look at the ESIF's computing capabilities when he went into the ESIF's visualization room, donned special glasses, and saw on a 16-foot, 3-D-like screen how wind turbine blades can alter the wind flow as it approaches other turbines downstream. The same visualization room can give scientists a shifting, human-sized view of the inside of the molecules of a solar cell or biofuel.

"This will take us to a whole new ballgame," Moniz said. "It's an enormous advantage."

Xcel Energy CEO and Chairman Ben Fowke said the ESIF will grow even more important now that solar and wind are in many cases cost competitive with fossil fuels. He noted that Xcel leads the nation in wind power. His company now can purchase 20 years of wind power for less money than the comparable megawatts from natural gas, saving customers $800 million over the next two decades.

Wind forecasting software developed at NREL and elsewhere saved Xcel $20 million last year alone, and NREL research on the effect of cloud cover on solar energy will save even more, he said. Better forecasting means utilities can be more confident about the reliability of renewables, and that means less need for reserve power.

"We can really unlock the power of the future beginning today," Fowke said. "We're really excited about this next chapter in NREL's progress, and the integration of distributed resources into our grid. I'm confident our mission to deliver safe, clean, reliable power at a competitive price is in good hands because of partners like NREL."

Later, Fowke noted that Xcel during certain hours uses 80% wind energy, and so far it's gone off without a hitch. "Our number-one job is to make sure our customers can rely on the lights staying on," he said. "As the energy portfolio diversifies, we'll be depending on wind and solar forecasts and the capabilities of the ESIF more than ever." 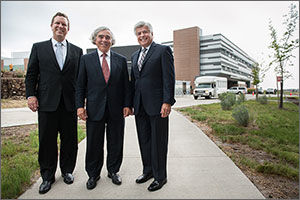 The Energy Department also made two other important announcements while the Secretary was at NREL.

NREL will work with the Energy Department and Toyota North America to research ways to integrate plug-in electric vehicles into the power grid. Scientists and engineers at the ESIF and NREL's Vehicle Testing and Integration Facility will use 20 Prius plug-in hybrid electric vehicles to develop and explore ways to help grid operators accommodate the fast-growing U.S. electric vehicle fleet.

Stricker also said that Toyota will reveal its first production hydrogen fuel cell vehicle — a mid-sized sedan — at the Tokyo Motor Show in November. Its North American debut will be at the Consumer Electronics Show in Los Angeles in December.

He said Toyota will continue to work closely with NREL researchers at the ESIF. "We need continued collaboration between industry and government to solve the problems we face."

NREL is also working with the U.S. Army to develop a power system comprised of solar energy, battery power, and generators that can provide electricity to forward operating bases. Using the integrated test capabilities of the ESIF, NREL will complete a prototype of the Consolidated Utility Base Energy (CUBE) system and validate its performance, reliability, and projected energy savings.

ESIF's Role Will Be Transformative 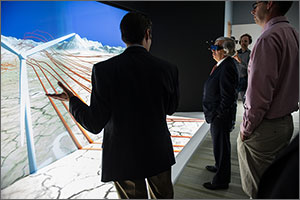 NREL Director Dan Arvizu said that without partners such as Toyota, Xcel, Hewlett-Packard, and the Energy Department, the ESIF wouldn't be what it is.

The ESIF will allow industry decision makers to model what an increasing penetration of solar or wind energy onto the grid would look like in real time, at a level of accuracy and detail never seen before, Arvizu said.

David Danielson, the Energy Department's assistant secretary of energy for renewable energy and energy efficiency, lauded NREL for having the vision seven years ago to know that such a facility as ESIF was needed — and for pushing for it with the Department. "At every step, NREL provides critical leadership that guides policy."

Moniz noted that for solar, wind, light-emitting diodes (LEDs), and fuel cell batteries, the past few decades have seen plummeting prices and a huge rise in deployment.

The cost of solar power has plummeted 99%; wind led all technologies in new deployments last year; the price of LED bulbs has fallen from $50 to $15, and each one can save a homeowner $100 over a lifetime; and fuel cell prices have dropped sharply, while safety and longevity have improved greatly.

"A lot of us still have this lingering idea that these technologies are five or 10 years away, but really, we are on the threshold," Moniz said. "Each of these will be a material part of our energy system very soon."

That makes the ESIF and the successful integration of myriad forms of energy all the more crucial, Moniz added. Referring to the battering the nation's infrastructure took from recent extreme weather events such as Hurricane Sandy, and the need for a more flexible, integrated system that accommodates clean energy, Moniz said: "Mother Nature is pointing out that if we don't take care of our energy system, she will."