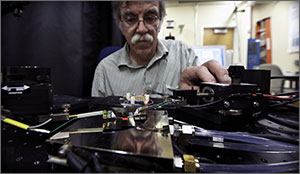 NREL researcher Keith Emery uses a high-intensity pulse solar simulator to test a concentrator solar cell in his laboratory at NREL. This summer, Emery was presented the Cherry Award by the IEEE.
Credit: Dennis Schroeder

Keith Emery always had amazing computer programming skills, but he lacked that special gift for creating solar cells. So, 30 years ago he switched to something more in his wheelhouse — characterizing and measuring the efficiency of solar cells and modules.

He succeeded so well, building a world-class testing facility at the Energy Department's National Renewable Energy Laboratory (NREL), that he was recently given the annual William R. Cherry Award by the Institute of Electrical and Electronic Engineers (IEEE) — one of the most coveted awards in the world of solar photovoltaic (PV) energy.

Emery is the third consecutive Cherry Award winner from NREL. In 2011, Jerry Olson, who developed the multi-junction solar cell, won the award. Last year, Sarah Kurtz, who helped Olson develop the multi-junction cell and is now a global leader in solar module reliability, won the award. And three other NREL scientists have won the Cherry Award in earlier years — Paul Rappaport (1980), Larry Kazmerski (1993), and Tim Coutts (2005). Emery says the cross-fertilization at NREL, with great scientists inspiring greatness in others, is the reason there have been so many Cherry Award winners at the lab — and is certainly the reason he won his.

Greg Wilson, director of NREL's National Center for Photovoltaics (NCPV), said: "Having three consecutive Cherry Award winners from the NCPV validates the strength of the PV program at NREL and the high degree of confidence that the international PV community has in our staff."

Emery, Kurtz, and Olson agree that NREL could not have won three Cherry Awards in a row without being given the time to research high-risk approaches to solar cells — a luxury rarely afforded private industry.

"NREL has had a sustained program in PV for 30 years," Kurtz said. "The industry is changing very rapidly, and companies come in and go out of business. What is unique about NREL is that people here have been able to stay and work in the same fields and become experts. If we didn't have that continuity it would be impossible to achieve that level of expertise and therefore that level of recognition."

Kurtz recalls that when she and Olson began working on a multi-junction approach to solar cells using indium and gallium, "everyone thought it was a stupid direction, because they knew it wouldn't work." That consensus opinion would have been enough to frighten away investors, but a national lab like NREL has the advantage of "exploring directions companies would think are too high-risk for them," she said.

"It was their [Kurtz's and Olson's] long-term attention to that material, plugging away at all kinds of problems, that made it work," Emery said. "They ultimately showed that it was superior to anything else. Satellite manufacturers picked up on it, and now all the satellites in space and all the concentrator PV systems use that technology."

Emery has a Teddy Roosevelt moustache and routinely climbs high rugged mountains in the Colorado Rockies. But the Cherry Award startled this usually unflappable man.

"I was very surprised," Emery said.

Others aren't surprised, citing his work to bring iron-clad certainty to the claims made by solar companies about the efficiency of their cells and modules — not to mention the 320 scientific publications he's written.

"Accredited measurements from Emery's laboratories are considered the gold standard by the U.S. and international PV communities," said NREL colleague Pete Sheldon, deputy director of the NCPV. "Keith has been a leader in cell and module performance measurement techniques that have been the foundation for the credibility of PV efficiency standards for a quarter century."

The award is named in honor of William R. Cherry, a founder of the PV community. The award recognizes an individual engineer or scientist who has devoted a part of his or her professional life to the advancement of the science and technology of photovoltaic energy conversion.

In the world of solar cells, a seemingly small improvement in efficiency is almost always a very big deal. Higher efficiency links directly to cost and helps solar cells compete with other forms of energy.

Before Emery brought strict standards and independent analysis to testing and measurement, claims of high efficiency would be published in the literature without any independent verification.

"We decided that independent verification was important for credibility," Emery said. He and his NREL colleagues standardized measurement techniques, testing cells and modules under identical environmental conditions. But that meant that companies didn't always like the efficiency numbers they were getting back from Emery's lab.

"The happiness factor was never in our favor," Emery said. "We were coming in with lower efficiencies than the customer expected."

Emery and his colleagues stuck to their guns, and soon certification from NREL was de rigueur in the solar cell world. "Our goal is to eliminate surprises," Emery said. "If the measurements on their end disagree with our measurements, we show them why. It's in everyone's best interest to know what the environment is."

The service is readily available so researchers and companies have equal access to the resources needed for independent efficiency measurement, he says. "We provide the same playing field for everyone. We have to thank the Energy Department for this. They've funded it. We've been able to offer the service to everybody from national labs to a lot of low-budget startups. They all get the same verification." 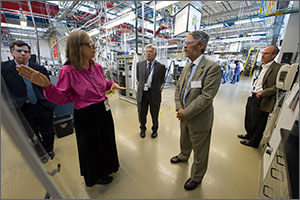 NREL Senior Scientist Sarah Kurtz won the Cherry Award in 2012 for her contributions to the development of the multi-junction solar cell and her leadership in solar panel reliability. Last fall, she gave a presentation to Dr. John Holdren, second from right, senior advisor to President Barack Obama and director of the White House Office of Science and Technology Policy, at the Process Development Integration Laboratory at NREL. To Kurtz's left is NREL Director Dan Arvizu.
Credit: Sarah Barba, NREL

Good Times with Electronics and Chemicals

Emery spent the first 25 years of his life in Lansing, Michigan, attending public schools before going on to Lansing Community College.

His interest in electronics goes back to seventh grade, when he made a five-tube amplifier out of a junk box hi-fi and a TV set. "I would have violated every safety rule we have at NREL, but that's a separate issue. I've always been interested in computers, going back to the days of paddle switches, punch cards, and paper tapes."

Emery started working with chemicals in community college, including some chemicals that are so potentially hazardous they're not even allowed in some research centers today. "Yes, I had fun with chemicals."

He earned his bachelor's and master's degrees at Michigan State University, where he fell under the tutelage of Stan Ovshinsky, whose pioneering work in amorphous silicon semiconductors set the course for many technologies and industries. More important to Emery, Ovshinsky introduced his young graduate students to energy-conservation devices, delivered a lecture on amorphous silicon, and "treated us like VIPs," springing for the occasional expensive meal.

Emery was getting close to earning a doctorate for his work on high-energy lasers when he had a change of heart, thanks in part to Ovshinsky opening his eyes to the potential of silicon, as well as his involvement in the growing environmental and renewable energy movement. 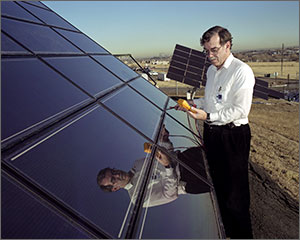 Keith Emery has been testing the performance and reliability of PV cells for more than two decades. In 2001, he used advanced state-of-the-art test beds to characterize the PV cells and modules at NREL's Outdoor Test Facility.
Credit: Warren Gretz, NREL

Making the Switch from Lasers to Renewables

"It was one of the first Earth Days, in the early 1970s," he said. "I was in graduate school having a great time working on high-energy lasers. But they were Star Wars lasers — the Strategic Defense Initiative.

"I wanted a career outside the military-industrial complex," he said. "With the excitement of those first Earth Days, and with the oil embargo, doing something in renewable energy was appealing."

NREL's predecessor, the Solar Energy Research Institute (SERI), offered him a job — impressed, by and large, by his computer skills. "I always had a knack for programming," he said. "Every lab that hired me wanted me for my programming. They didn't want me for anything else."

So, Emery developed the test equipment and put together the data-acquisition system for characterizing and measuring the efficiency of solar cells. Turns out, his programming skills were essential to computer-control measurements and numerical control of instruments. "That's what we needed to build our lab."

He has spent his career building the capabilities of that testing and characterization lab, making it one of a handful of premier measurement labs in the world — and the only place in the United States that sets primary standards for solar-cell characterization.

A few years back, Emery published a paper on how to artificially increase solar-cell efficiency — not to encourage cheating, but to warn journal editors to be suspicious of claims.

"There have only been three or four papers in the past 35 years that have made claims that were outright bogus," Emery said, lauding the solar community for its integrity. Still, editors need to be on the lookout for exaggerated claims.

New materials will have to be more efficient and more economical than silicon to make a big dent in the market, Emery says. "They have a huge learning curve to keep costs down," he said, referring to thin films, organic PV, amorphous silicon, and other products just now moving from national labs to private companies. On the other hand, the newer materials have a great chance of invading niche markets such as solar cells on clothes, on signs, or on things that shine and glow or are hit by a laser. The multi-junction cell, for example, has already proven its superiority in outer space.

When he's not at work, Emery enjoys the Colorado outdoors. Emery and his wife, Pat, just published a paper on their own solar house, for which Emery dug the ditches, painted, and installed the insulation.

And at work, he'll keep testing and measuring the products of extraordinary research, as he continues to keep his lab among the best in the world at measuring solar module capacity.

As for the Cherry Award, Emery gives much of the credit to the colleagues who work in his lab and who have on average about 16 years of service at NREL. "Take my team away, and I wouldn't have gotten this award — it's that simple."

Learn more about NREL's work in Photovoltaic Measurements and Characterization .