NREL Drives Toward the Future with Fuel Cell EVs 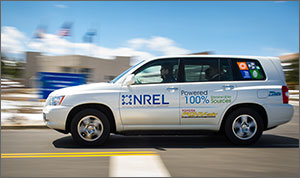 Efforts currently underway at the Energy Department's National Renewable Energy Laboratory (NREL) are contributing to rapid progress in the research, development and testing of hydrogen and fuel cell technologies.

The Toyota vehicle represents another step toward the commercialization of fuel cell electric vehicles (FCEVs). Hydrogen fuel is most often produced using domestic resources and can also be produced using clean renewable energy technologies. When hydrogen is used to power an FCEV, the vehicle has zero tail pipe emissions.

The fuel cells in the Highlander FCHV-adv are representative of the FCEV designs being demonstrated today by automobile companies around the world, making this design an excellent platform for NREL's research activities. Toyota also plans to introduce an FCEV sedan to the U.S. commercial market in 2015.

The zero-emission FCHV-adv, based on a mid-size sport utility vehicle (SUV) platform, has an expected driving range of 325 miles and a fuel economy estimated at 60 miles per gallon of gasoline equivalent (GGE). GGE is a method for measuring the fuel economy of alternative fuels compared to gasoline and represents the amount of an alternative fuel equal to the energy in one liquid gallon of gasoline.

The vehicle is powered by a fuel cell system with light weight, high-pressure hydrogen tanks, an electric motor, a nickel hydride battery, and a power-control unit that determines the split of power from the battery or fuel cell stack to power the vehicle. 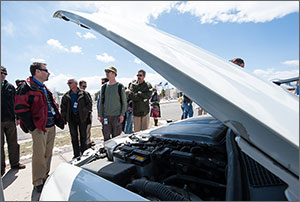 The four FCEVs, on a two-year loan from Toyota as part of a Cooperative Research and Development Agreement (CRADA) with NREL, will be put through a wide platform of testing and analysis at the lab. The vehicles were originally deployed in California in 2009 and have been redeployed to NREL as part of this CRADA.

"We're looking at the whole system — from renewable hydrogen production and vehicle fueling equipment to the impact of driving patterns and behavior on vehicle performance," said Keith Wipke, NREL Laboratory Program Manager for Fuel Cell and Hydrogen Technologies. "Because the vehicles will be four or five years old by the time our loan period ends, we will be able to observe extended durability and reliability, which are critical to the commercial success of these types of vehicles."

Testing will include observing how the vehicles interact with fueling infrastructure and fueling stations that operate at different pressures. While most hydrogen is currently produced from natural gas, at NREL, the vehicles will be fueled with renewable hydrogen made from wind and solar energy as part of the Wind-to-Hydrogen project at the lab's National Wind Technology Center. This project uses wind turbines and solar arrays to power electrolyzers that split water into hydrogen and oxygen.

"These vehicles are emission free, but in most scenarios you still have emissions during the hydrogen production," Wipke said. "If you can make the hydrogen using renewable resources you have the potential for this to be a truly zero-emission fuel source. We're pleased to have the opportunity to further investigate this potential."

Other tests will investigate how drivers interact with the vehicles and influence performance over the test period. Researchers will look at the effects of environment and driving patterns on the vehicles' energy storage and propulsion systems, and demonstrate the vehicles operational capability in real-world activities.

On behalf of the Energy Department, NREL is also planning public outreach and education efforts to better prepare the market for the deployment of these types of vehicles. NREL will offer first-hand exposure to hydrogen and fuel cell vehicle technologies to a variety of audiences, including the general public, academia, and the automotive industry.

Getting Ready for Our Transportation Future 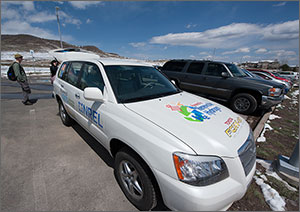 FCEVs use hydrogen, stored in high-pressure tanks made of carbon fiber resin, which is fed to the fuel cell stack where it combines with oxygen from the air. The electricity produced by this chemical reaction is used to power the electric motor and charge the battery.

"For someone like myself who is not an electrochemist, it's truly a fascinating technology," Wipke said. "Hydrogen atoms interact with a membrane coated with small amounts of platinum, which splits the hydrogen into protons and electrons. The protons pass through the membrane, and the electrons go around a different path and do the useful electrical work. Eventually, they meet on the other side with oxygen from the air, and form water, which along with a little heat is the only byproduct of the process."

Fuel cell technologies and the use of hydrogen as a transportation fuel are becoming more visible as automotive manufacturers move these concepts closer to market.

But while these fuel cell technologies are proven and effective, there are still challenges in deploying them, particularly in terms of reducing cost and increasing durability. NREL's long-term durability testing for FCEVs will provide important data toward solutions to these two interrelated challenges.

Another significant issue with deploying these technologies is the need to develop infrastructure around hydrogen production, delivery, and fueling stations.

"We need a lot of infrastructure in place for FCEVs to have widespread consumer acceptance," Wipke said. "Most hydrogen fueling stations use delivered hydrogen instead of on-site production. That is the most economical pathway right now, but with our capabilities here at NREL we are able to fully explore the opportunities for on-site production."

Despite the challenges, Wipke sees a strong future for the FCEV technology.

"Most automakers are committing to get to market with these vehicles before this decade is out. That is encouraging," Wipke said. "The biggest reasons that they are so excited about this option for the future is that range and refueling time are not a concern compared to other new transportation technologies. This makes it a potentially very consumer-friendly transportation technology, one that will function much like what drivers use today."

"It's an exciting opportunity to help move these technologies forward, and we're pleased to have an important role here at NREL."