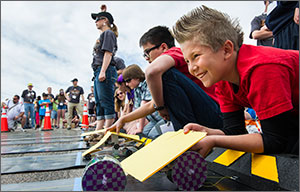 Xavier Urquijo from Summit Ridge Middle School in Littleton waits for the start signal to lift the folder covering the solar panel on his team’s car, “Knight Hawk.” His team was one of 97 from 28 Colorado middle schools racing solar and lithium-ion powered vehicles they designed and built themselves at NREL's 2013 Junior Solar Sprint and Lithium-Ion Battery car competitions on May 18.
Credit: Dennis Schroeder

Put a solar or lithium-ion car in the hands of a middle-school student, and watch adolescent angst and eye-rolling disappear — at least for a few hours.

"This is the best," said a boy from Greeley last week at the annual Colorado Junior Solar Sprint and Lithium-Ion Battery car competitions in southern Jefferson County on May 18.

"We rock — we are such risk-takers," said a girl from Douglas County.

NREL and other sponsors hold the races each year to show middle-school students that science, engineering, and design can be rewarding, in an effort to encourage them toward careers in STEM — science, technology, engineering, and math. The batteries and solar panels are supplied by sponsors, but students design and build the rest of their cars themselves.

NREL Laboratory Fellow David Ginley, who served as official starter for the solar races, said: "For many middle schoolers, this activity represents their first hands-on connection to renewable energy and sustainable technologies."

Ninety-seven teams from 28 middle schools throughout Colorado were at Dakota Ridge High School on Saturday by the time the first-period bell rings on a weekday.

The sun was a near no-show, barely peeking through the thick clouds.

The atmosphere was electric, akin to the pits at Talladega, with checkered flags, sponsor decals, and heart-racing, deadline-pushing repairs. Parents cheered, buffered disappointment, and cheered some more. Coaches corralled team members, who scattered to make last-minute adjustments to the hooks and paper clips that connected their cars to the guide wires down each lane.

Girl Power, with a Hint of Nail Polish 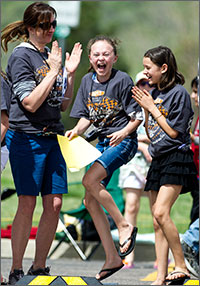 Femininity was not going to take a back seat to engineering for the girls from Woodland Academy in Castle Rock. Sure, they had designed a solar-powered car that could roar down the 20-meter neoprene track in a tick above 6 seconds. But showing that brains and fashion can combine, they cut the chassis of their car in the shape of a bottle of nail polish.

"The black part is where you take the brush out, and the purple is the color of the nail polish," said Emma Ciafone, who was sporting purple toenail polish herself.

The four-girl team, dubbed "Sweet and Sassy," looked like they were ready for senior prom at Sparkle High School, with eye glitter, makeup, stylized coifs, and purple ribbons in their hair.

"We woke up at five to do makeup; we went a little overboard," said Sofie Weidenhues.

The Joy of Victory, the Agony of Wipe-outs

"Let there be photons!" race starter Ginley yelled . And a few photons peeked through the clouds, enough to separate the wheat from the chaff among the solar engineering designs.

Some cars performed like champions on the practice track, but wavered in the actual races.

"I think my car has stage fright," said Taylor McCown of Merrill Middle School in Denver. "It goes forward and backward great on the test track, but I couldn't get it going when it counted."

"But we finished — that's something," said teammate Devin Shepard. 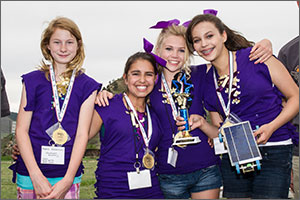 A team of girls from Southern Hills Middle School in Boulder had a solar car fast enough to make it to the semifinals, thanks in part to wrapping a wide rubber band around each wheel to reduce friction.

But they put more effort into whimsy with their car, "Blue Water Blast." "We used cellophane to make it appear that there was blue water inside," said Rya Muller.

They crafted two fish, a jellyfish, a crab, and an eel to place inside the cellophane-sealed box.

"They shake when the car moves, so it looks like they're swimming," said Mia Kirlan-Stout.

Awards for Speed, Design, and Sportsmanship

In the semis, "Blue Water Blast" and "Sweet and Sassy" were in the same heat, but neither advanced to the finals. "My car runs completely on solar, and there just wasn't enough sun," said Summer Hockey, chief designer for "Sweet and Sassy." "We gave it our best shot, but you can't always win. It was really fun." 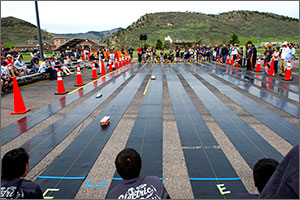 The Rocky Mountain Foothills provide a dramatic backdrop for the 23rd annual Colorado Junior Solar Sprint and Lithium-Ion Battery car competitions hosted by NREL and the U.S. Department of Energy at Dakota Ridge High School in Jefferson County. The neoprene racetracks are 60 centimeters wide. A fish line down the middle helps keep the cars in a straight line. Eyelets or paper clips secure the cars to the line.
Credit: Dennis Schroeder

It was congeniality like that — not to mention the eye sparkle and hair ribbons — that won "Sweet and Sassy" the Spirit Award for good sportsmanship, respectful behavior, enthusiasm, and courtesy. "Sweet and Sassy" also won the first-place design award in the solar car division.

The solar car speed winners, from the STEM School and Academy of Highlands Ranch, put long hours into engineering. "We played around with the geometry until it was perfect," Michael Whitaker said of his team's sleek car, which was comprised of a thin slab of glass and a protective cover over the solar panel to block the sun until it is needed. The team used a laser engraver to ensure the cover had the same dimensions as the car itself, and put holes in the glass to increase air flow.

"We spent a lot of time on the gear ratios so it wouldn't require much power to get to full speed," said Koby Dudley.

Rashid Zakiror noted that they could adjust the slab of glass up and down to match the angle of the sun. "I think the clouds actually helped us, because our car might have needed less sunlight than the other cars."

During a break, several of the competitors drew inspiration from watching a neighboring exhibition race — high-school students from all over Colorado racing their larger model cars around an oval track at high speeds. It was an hour-long endurance contest, and the laps numbered in the hundreds.

Hauling a Bunch of Salt in Lithium-Ion Vehicles 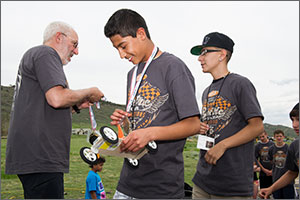 In the lithium-ion battery car division, wheels were flying off cars like leaves in a storm. The "Dynamic Divas," racing against five all-boy teams, were in third place with a ticket to the semifinals when their car lost its grip on the guide wire and spun off the track.

The lithium-ion team from University School in Greeley was thinking speed and not much else. The cars need to be light, streamlined, and rugged enough to speed down the track while nestling a 26-ounce cylinder of salt above the chassis.

The team's balsa-wood car, "Lucky Charms," won a preliminary heat in 5.6 seconds, but the cardboard backseat gave way to the weight of the salt.

The team had a quick confab with their coach, eighth-grade STEM teacher Eric Buxman, and headed to the repair station.

Rubber bands are the duct tape of the car repair shop, but ultimately, the University School team decided on glue to strengthen the backseat.

A Competition to Inspire All Types of Students 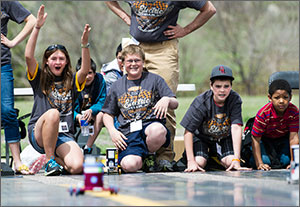 "They're really doing excellent, but they're nervous," seventh-grade STEM teacher Keith Decker said. "Some of these kids struggle in class, but a competition like this brings out the best in them."

For the lithium-ion finals, the University School team of Trenton Elliott, Moises Martinez, Trevor Killen, and Devin Archuleta made a last-second decision to place the salt canister sideways across their car's backseat.

At the starter's command, they switched on the battery and the car blazed down the track in 5.52 seconds, winning by a couple of car lengths.

"STEM is our favorite class — at least when we were building our car, it was our best class," Archuleta said.

Ginley, the NREL research fellow who served as starter for the solar races, said he's always gratified by the annual contest. "This year, the competition was so close," he said, indicating that a large number of teams had first-rate designs. "And they did it on a very cloudy day. Events such as these kindle the passion for renewable energy in the next generation."

Bill Farris, associate NREL laboratory director, said: "Some of our best young researchers first heard of NREL when they were in middle school, designing cars for this race. I'm betting that some of the kids here today will be working for us or designing cars someday."

If so, we can all look forward to a future of whimsical, fashionable, and speedy cars — all driven by renewable energy.