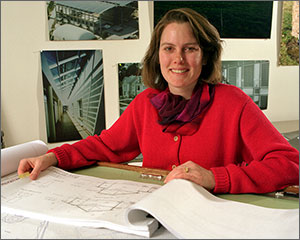 For the past 21 years, Sheila Hayter has worked at NREL; few people have been more instrumental in helping establish stringent standards for energy-efficient buildings in that time. For even longer, Hayter has served her favorite professional organization, ASHRAE, which sets the standards for building safety, efficiency, and quality.
Photo by Warren Gretz, NREL

In between dealing with a baby chick, a broken cello string, and a colleague needing a ski lesson, Sheila Hayter still makes time to tackle projects for the Energy Department's National Renewable Energy Laboratory (NREL) and ASHRAE (American Society of Heating, Refrigerating, and Air Conditioning Engineers), the worldwide organization for building engineers.

Hayter, 46, is a senior engineer and group manager for opportunities, evaluation, and implementation in the Deployment and Market Transformation Office at NREL in Golden, Colorado.

She's the kind of person who, when asked if she has a philosophy of life, responds with a laugh, "Oh, I don't have time for that."

Be it undeclared, she lives a philosophy of getting things done, of finding a balance between professional and personal, and of espousing her passion for energy efficiency in the buildings in which we live and work.

Ross D. Montgomery, a 2010—2012 ASHRAE vice president, says of Hayter: "She has incredible vision for the future of our industry. She makes our work fun, exciting, and interesting. She stays on the issues and is involved in the solutions. She is the agent of change and inspires young engineers to want to be a part of our industry."

Few people have been more instrumental in helping establish stringent standards for energy-efficient buildings or for pushing architects, engineers, and developers to strive for 50% or more savings beyond the standards. For the past 21 years, Hayter has worked at NREL. For even longer, she has served her favorite professional organization, ASHRAE, which sets the standards for building safety, efficiency and quality. She currently chairs the Planning Committee of the 55,000-member organization. 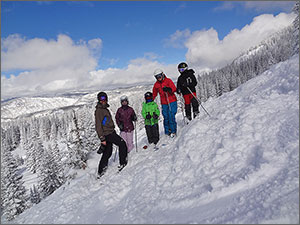 An avid skier, Hayter and her family frequently ski Colorado’s slopes. This photo was taken during a recent family outing near Steamboat Springs.
Photo courtesy of Sheila Hayter

On a recent Tuesday, though, Hayter's mind was on her three kids and domestic misadventures.

"One of our baby chicks died last night," she said. "We have five — three adult hens and two babies. But I'll need to buy another baby chick on my way home tonight, because the other baby needs a friend."

All three of Hayter's kids ski, ride mountain bikes, and play the piano, but each also has a specialty musical instrument. Megan, 13, plays the flute; Kian, 9, plays the violin. And Brennan, 12, plays the cello — but not when the A string snaps, as it did this morning. That's one more errand for the way home.

"I'm overcommitted," Hayter said cheerfully. "That's because I have a hard time saying no when something sounds fun — both in my work and my personal life. But I do try hard to stay somewhat balanced between what I do here at NREL, and doing other things that keep my life interesting."

Hayter grew up in Manhattan, Kansas, where her father was a mechanical engineer — both in the private sector and as a professor at Kansas State University.

She surprised the family at 13 by earning enough babysitting and lawn-work money to take a school trip to Steamboat Springs — the first member of her family to go skiing. Thirty-three years later, her entire extended family skis, and in most recent years she has been a weekend ski instructor at Copper Mountain in the Colorado high country.

Advice — or Misinformation — from Dad

Asked what got her interested in math, science, and engineering, Hayter said: "I remember my dad helping me with math, and I was in tears because it didn't make any sense to me, and I asked him why I even have to take math. He said, ‘You have to learn it because when you take thermodynamics you'll have to know it.'

By that time, she was hooked.

She joined one of the first student branches of ASHRAE and was in charge of bringing professional engineers to the university for talks. "That really helped me see the difference between engineering in an academic setting and the challenges facing engineers in real life," she said.

As a female mechanical engineering major, Hayter found herself outnumbered about 20:1. "Most of my professors were very supportive, but there was this one guy. I went to his office and asked him a question about a problem I couldn't figure out. He said, ‘Well, girls can't do math. My daughters can't do math either.' He was just so dismissive. It was like he was saying, ‘Just go away. I can't answer your question.'"

Hayter ended up getting an A in the class, partly, she says, to spite him.

Hayter established and coordinates efforts within the federal government to build energy-efficient buildings. As an NREL engineer she has pushed the envelope on incorporating renewable energy into these buildings.

She has published 50 documents and papers in her time at NREL, including "Handbook for Planning and Conducting Charrettes for High-Performance Projects," considered the "go-to" document for conducting design charrettes for energy-efficient buildings that are seeking LEED certification.

In addition, she chaired the committee that developed the original charter for ASHRAE's Advanced Energy Design Guidelines — both guides that specify achieving 30% or 50% greater efficiency than baseline standards, as well as guides that can get a building to net-zero energy.

Hayter was also on the original planning committee that conceptualized the international Solar Decathlon competition. And she was the technical lead for Boston and New York in the DOE Solar America Cities program, helping push NYC's ConEdison to fully embrace leadership in solar energy.

Traveling the World on Behalf of Energy Efficiency

Hayter is a distinguished lecturer for ASHRAE. Typical of her schedule in a 12-month period: Four cities in India, five cities in Canada, two in Georgia; presentations in Salt Lake City, Anchorage, Billings, Wichita, and Manhattan, Kansas. Previous speaking engagements have taken her to Greece, Italy, Hong Kong, and the Philippines, in addition to other cities in the United States and Canada.

Hayter's envelope pushing has produced real, replicable results. For example, the U.S. Energy Policy Act mandates that federal buildings improve their efficiency based on percentage improvements to ASHRAE standards. That includes the whole building, from saving energy to improving air quality and making the climate more comfortable — all stemming from the push by ASHRAE and the Energy Department for more stringent standards and a holistic approach to buildings.

"There is this triangle where everybody is influencing everybody else — the Energy Department, NREL, and the professional organization, ASHRAE," Hayter said. "Our success in increasing energy standards for buildings couldn't have happened without the organizations working with each other." 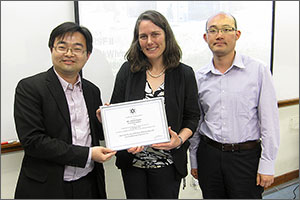 In April 2012, Hayter spoke to the Hong Kong ASHRAE chapter as part of the ASHRAE Distinguished Lecturers series; she is pictured here with her hosts.
Photo courtesy of Sheila Hayter

Hayter is sanguine about the future, because she remembers 25 years ago when she would try to espouse the virtues of green buildings only to be greeted by yawns — save the cheers of a few ardent environmentalists.

Everyone else would harrumph that insulation costs more than cheap (at the time) energy and that natural ventilation was just too far out — something that hippies did.

But Hayter plugged away, with the help of some committed ASHRAE colleagues and her growing group of NREL building engineers. She helped building engineers around the country and across the globe to think about the building as a whole, including how energy efficiency can fit in with design and aesthetics.

"I'm a believer," she said. "I think the ASHRAE standards are making a big difference. The standards are being incorporated in buildings all around the world."

Her first manager at NREL gave her an important life lesson. "He told me, ‘Sheila, if it needs to get done, it will get done. Things that don't get done — maybe they didn't have to be done.' He was telling me to prioritize and that you can't beat yourself up over not getting to everything, including things that maybe weren't so important in the first place."

"Now, when I speak to a group of engineers, they generally want to do the right thing; they think sustainability is great," she said. "But in a lot of states, they still run into so many barriers. There are a lot of states with no renewable energy portfolio standards, no state or local incentives at all that can help pay for efficiency in buildings.

"These engineers want to design and build efficient buildings, but they don't have a chance to do it. I talk to them about net-zero buildings, but the environment is just not conducive to applying those concepts."

Today, most young engineers are entering the profession with an environmental ethic, she said. So in 10 or 15 years, sustainability may be an absolutely mainstream concept. "In 10 years, at the rate we're going, maybe we'll be 60% there. In another 10 years, maybe 75%.

"That would be all right."

Until then, there are more committees to chair and more energy-efficient standards to toughen — not to mention the family trip to Fruita, Colorado, for mountain biking, the raft trip down the Colorado River, and the new A string for the cello. And for goodness' sake, don't forget the baby chick.