NREL Teams with Navy to Cut Energy Use 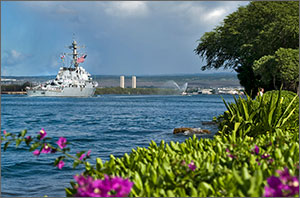 Guided-missile destroyer USS O'Kane returns to Joint Base Pearl Harbor-Hickam after a seven-month deployment. The Navy and NREL have teamed up to find solutions to meet the Navy's ambitious energy goals, including working with the Naval Facilities Engineering Command in Hawaii and Guam to install and test advanced building efficiency, HVAC (heating, ventilation, and air conditioning), and renewables and facility integration technologies.
Credit: Photo by U.S. Navy Mass Communication Specialist Seaman Diana Quinlan

Check off a list in your head of the government organizations that play a role in the security of the United States. The Department of Defense (DoD) and Homeland Security probably come to mind, as well as the CIA or FBI. While the U.S. Department of Energy's National Renewable Energy Laboratory (NREL) may not even make the list, in fact, the national laboratory is doing its part to help provide energy security and reduce energy costs for the military as an energy advisor to DoD and, in this case, the U.S. Navy.

DoD accounts for 80% of federal energy use, and it spent $19.4 billion on energy in 2011. NREL is currently focused on helping slash the 21% of DoD energy costs that are spent to operate DoD installations around the world.

"DoD is the biggest energy user in the United States. NREL and DoD's missions are not the same, but they do complement one another," DoD Energy Program Director Steve Gorin said. "The military's mission is operational excellence, and the cost of energy has been a huge variable that they can't predict. Anytime the price of oil goes up or anytime there is a grid outage, it impacts how they accomplish their mission. In the case of NREL, our mission is to innovate and to work with others to get technologies out there and transform the energy economy. Put the two together, and you have an early adopter with a huge market working alongside an energy innovator."

To put into perspective how large a facilities energy consumer DoD is, consider that it has:

DoD realizes that relying on a singular national energy grid puts its facilities and critical infrastructure at risk. So the Navy and NREL are looking for solutions to meet the Navy's ambitious energy goals, which include: evaluating energy efficiency and use when awarding Navy contracts for systems and buildings; increasing alternative energy use on shore by producing at least 50% of shore-based energy from alternative sources; ensuring that 50% of Navy and Marine Corps installations will be net-zero energy.

"Energy security is a key priority for the Department of Navy [DoN] and the way we conduct future operations for our warfighter and for our fleet," said Tom Hicks, deputy assistant secretary of the Navy for energy. "We look forward to our partnership with NREL as it helps us meet our energy goals."

"NREL is excited to help the Navy advance its energy goals by providing test beds to demonstrate energy technologies," Gorin said. "We believe a few things can happen. First, we can make an impact by helping the nation's single largest energy user be more efficient. This will reduce risk to the military when adopting new technology, and it will help it meet energy goals through demonstrations and then replication. Finally, helping organizations like the Naval Facilities Engineering Command [NAVFAC] to be early adopters of these technologies will help to catalyze civilian commercialization."

Work Begins on Hawaii and Guam 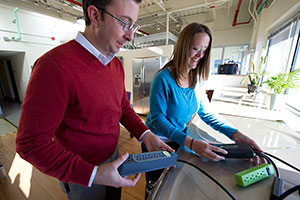 NREL engineers Dane Christensen and Bethany Sparn test advanced power strips at NREL's Automated Home Energy Management Laboratory. The lab enables researchers to study the complex interactions of multiple appliances and plug-load devices with the broader distribution grid. NREL will be helping the U.S. Navy study these energy-saving devices in homes and offices at the Joint Base Pearl Harbor-Hickam in Hawaii and Naval Base Guam.
Credit: Dennis Schroeder

The NREL-Navy partnership began in August 2011 as part of a $20-million project focused on improving energy security. "These investments are for projects for near-commercial technologies that will be cost efficient for DoN," said Hicks.

The project is expected to last two and a half years and will be carried out in three phases.

From the beginning, NREL and the Navy formed an integrated team to seamlessly manage the demonstration projects. Formally known as an Integrated Product Team, an IPT is a multidisciplinary group of people who are collectively responsible for delivering project outcomes.

During the first phase of the partnership, NREL worked to identify what technologies would help meet Navy energy goals, along with the best locations to demonstrate them. The Navy specified that at least one demo must happen on Hawaii and another on Guam. In the end, eight technologies were chosen for demonstration with roughly half at each location. The technologies are now being installed and studied to see which are viable. The final phase will be to report on the technologies and help transition them to other sites and the commercial market.

"These technologies are near commercial, but not yet widely available," NREL Principal Investigator Jeff Dominick said. "We plan to demonstrate these technologies under rigorous test conditions and evaluate performance with an emphasis on cost savings and energy security."

Saving Energy, Money at the Home and Office

"The support of NAVFAC Pacific and the component commands of NAVFAC Hawaii and NAVFAC Marianas were instrumental on this project. Their planning, engineering and construction expertise to NREL helped ensure the demonstration projects were realized," said Scott Mauro, energy/sustainability lead for the office of NAVFAC's Chief Engineer. "The projects selected have broad application to DoD facilities, and through this partnership with NREL, we continue to improve our ability to assess and implement shore energy technologies. These infrastructure improvements will lower total ownership cost to our supported commanders, in support of the Navy's energy goal to increase the use of alternative energy ashore."

In helping the Navy improve its energy use, NREL is looking to cut the intensive HVAC use on bases. The teams will install a variety of advanced HVAC demonstrations, including energy-saving retrofit kits that can go on an existing rooftop air conditioner on a warehouse or office space. The team will also test a high-efficiency rooftop unit that, depending on the building type or climate, provides a possible second solution for energy savings.

"It's a partnership, so we want to give DoD options. Depending on site-specific conditions, we can decide if it makes more sense to swap out the unit or do a retrofit," Gorin said. "Because of the size, number, and geographic distribution of facilities DoD operates, it won't be a one-size-fits-all solution."

The final demo in the HVAC category uses liquid desiccant to dehumidify the air and reduce the amount of both conventional air conditioning and potential reheating that would be needed to make the space comfortable.

The next project will try to cut energy use at the home and office by installing advanced plug-load controls and looking at whole-building retrofits.

"Most people don't have a baseline understanding of what their plug-load energy use is," Dominick said. "We take for granted the energy used when plugging in office equipment and multimedia devices at home. Our team will be gathering those data and then putting in the controls to show how much energy is saved, not only in plug loads, but whole-building energy use for both residential and commercial buildings."

The work includes examining various advanced power strips to see which are best suited for particular uses and settings. For instance, is one set of controls better used at naval offices, while another smart power strip should be used in naval housing? In addition, eight houses will receive deep, whole-house energy-efficiency retrofits to determine the best paths for energy and cost savings.

"Not every housing unit is built the same, or is in the same climate," Gorin said. "But this is a validation of the baseline modeling process and the various tools that can then be used in other climates as well."

The last category of work is in advanced renewable generation and facility integration. One project will evaluate a system that enables higher penetrations of renewables on the local grid with a mix of control and energy storage technologies, which will improve overall power quality. A second project is a waste-to-energy gasification system developed by the Army. It had to be modified to be used at a Navy commissary and will be fueled by waste cardboard and food scraps (the wet waste will be dehydrated before use). Finally, a photovoltaic (PV) thermal solar collector will be studied with the potential to garner up to three times the energy from a single rooftop as PV alone. This is important for military bases that have constrained rooftop areas and  could boost the renewable energy output to help meet the ambitious goals for onsite renewable generation. 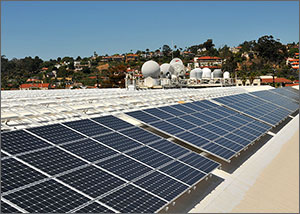 A view of solar panels recently installed on the roof of the Space and Naval Warfare Systems Command Headquarters in San Diego. The rooftop photovoltaic installation supports the Department of Defense's goal of increasing renewable energy sources to 25% of all energy consumed by the year 2025.
Credit: U.S. Navy photo by Rick Naystatt

Just because all these technologies will be tested on sites in Hawaii and Guam doesn't mean they all will be deployed to Navy bases around the world.

The key for the NREL team is not only validating which technologies will work best for the Navy and DoD, but also laying a foundation so they can be adopted Navy wide.

"This hit home when we sat down with the Navy to define what deliverables they wanted," Gorin said.

"Traditional demonstration programs would concentrate almost exclusively on the technical performance and cost savings. For this project, NREL was also asked to look at how the demonstration process dovetails into how the Navy does business. NAVFAC has been a great partner to help execute, install, and test these technologies so that we can take that knowledge and achieve wide Navy adoption of technologies that save money and enhance mission performance."

As part of this technology transition, NREL is working with key stakeholders and nonprofits to support civilian commercialization. This will provide a diversity of suppliers, U.S. jobs, and ultimately a lower price point for the Navy.

"DoN realizes the importance of partnerships with organizations like NREL to develop and refine energy programs across the department," said Hicks. "This partnership is the way forward for the Navy to achieve its energy goals."

According to Gorin, NREL brings a great deal to the table as a partner for possible future DoD efforts through its technology expertise and the ability to measure and demonstrate performance and cost savings. "This is a joint initiative, and the real power and value is that it is a collaborative effort where NREL and the Navy both bring critical and complementary elements to the mission."