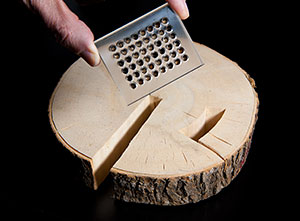 This tray of 80-milliliter samples was taken from a standard poplar tree, such as the one pictured here. It is ready to be loaded into NREL's molecular beam mass spectrometer for rapid analysis of the cell wall chemistry of each sample.
Credit: Dennis Schroeder

A screening tool from the U.S. Department of Energy's National Renewable Energy Laboratory (NREL) eases and greatly quickens one of the thorniest tasks in the biofuels industry: determining cell wall chemistry to find plants with ideal genes.

NREL's new High-Throughput Analytical Pyrolysis tool (HTAP) can thoroughly analyze hundreds of biomass samples a day and give an early look at the genotypes that are most worth pursuing. Analysis of a sample that previously took two weeks can now be done in two minutes. That is potentially game changing for tree nurseries and the biomass industry.

When it comes to making fuels out of trees, crops, grasses, or algae, it's all about the cell walls of the plants. Will they make it hard or easy for enzymes to turn the biomass into sugars? Differences in cell walls are enormous, and choosing the right ones can make the difference between a profit and a loss for tree growers, or between a fruitful or fruitless feedstock line for biomass companies.

Finding that particular species, or that individual tree, that has the genetic markers for the optimal biofuel candidate has heretofore been laborious and painstaking.

The Energy Independence and Security Act requires that the United States produce 21 billion gallons of non-corn-based biofuel by 2022. The market for biofuels is expected to grow steadily between now and then. Market analysts say the successful companies will be those that can steer their enzymes through the cell-wall structures in the easiest and most cost-effective ways, including by making changes in the structures themselves.

To find out the chemical composition of the cell walls, companies have to sample large quantities of biomass, whether it's switchgrass, remnants of corn stalks, fast-growing trees, or algae.

The traditional strategy had been a multistep approach involving sample dissolution and chromatographic analysis, which can determine what the tree is composed of — but at the cost of disintegrating the sample.

NREL developed an approach using pyrolysis, analyzing the vapor from the samples produced by heat in the absence of oxygen, which is called high-throughput analysis pyrolysis, or HTAP. Pyrolysis destroys the sample, but the sample is tiny — four milligrams for the pyrolysis approach versus 10 grams for the traditional approach. 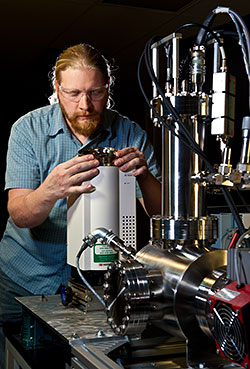 The lignin in a plant is crucial for its development and insect resistance, but it can stand in the way of enzymes that want to get at the sugars locked up in the carbohydrates. It's the deconstruction of the raw sugars that produces the sugars the biofuels industry finds valuable.

Lignin is a big molecule. Heating it up in the absence of oxygen — pyrolysis — breaks it down into smaller fragments that can be read by a molecular beam mass spectrometer.

The ratios of lignin to carbohydrate components, together with the intensity of the lignin peaks, can tell a scientist how easily a plant will give up its sugars.

HTAP integrates a molecular beam mass spectrometer with the pyrolysis unit to quickly determine chemical signatures (phenotypes) on small amounts of biomass samples that can be used for, among other things, identifying the genes controlling the chemical makeup.

Samples drop into the oven, where the pyrolysis creates a vapor that is read by the mass spectrometer — a chemical fingerprint. The auto-sampler quickly moves the samples into place and back out again, so the measurements can be taken every couple of minutes or so. Combining the HTAP chemical phenotypes with information such as genetic markers can signal there is a gene nearby that controls those chemical phenotypes — for better or worse.

HTAP can potentially reduce the amount of energy needed for ethanol production, said NREL's Mark Davis, principal investigator on the HTAP project. And that would make a huge difference in the marketplace.

The path toward an ultra-fast, ultra-sophisticated screening tool went through ArborGen, one of the nation's largest tree seedling suppliers. "They sent us some samples and asked, 'What can you tell us about them?'" Davis said.

Turns out, it was a lot more than ArborGen expected.

"We put the samples in our mass spectrometer, which looked at their genetic transformations and the associated cell-wall chemistry changes," Davis said. They discerned dozens of changes in transgenic biomass samples, each slight genetic tweak corresponding with a slight difference in the amount of lignin in the sample.

NREL was able to tell ArborGen that one sample had, say, half the lignin of another sample. "We were giving them information in a week that it took a month or two for them to get somewhere else," Davis said. "Not only that, but we were getting better information and greater chemical specificity and resolution than they had seen before." 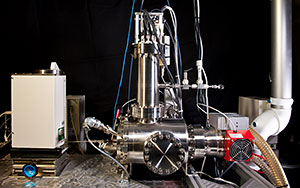 The auto-sampler provides the speed for NREL's High-Throughput Analytical Pyrolysis tool. Each minute or so, a new sample slides in place to be analyzed via the pyrolysis unit that heats the molecules to produce a vapor, and the mass spectrometer, which reads the chemical fingerprints contained in the vapor.
Credit: Dennis Schroeder

An Explosion in Demand for Quick Sampling

NREL had previously partnered with scientists from Oak Ridge National Laboratory, the University of Florida, and the University of California, Davis, to demonstrate that the HTAP method could combine with genetic information to identify genetic markers associated with cell wall chemistry traits. NREL's pyrolysis combined with a mass spectrometer was a big improvement over the old method of using wet chemistry to analyze, but the approach wasn't nearly fast enough to meet demand.

It still took a week to analyze samples from just 250 trees. "We were doing everything manually in a heated furnace," Davis said. "A single person would stand there all day feeding in samples." Even with this approach, the method that would soon evolve into HTAP identified numerous genetic markers associated with cell wall chemistry and provided greater chemical specificity and resolution than had been available before.

So, NREL used money from its internal general purpose equipment account to buy an auto-sampler, the final piece in the goal of combining automation, pyrolysis, spectrometry, and speed. NREL's partners in the project include Extrel CMS which worked with NREL to design and fabricate the molecular beam mass spectrometer, and Frontier Laboratories, which provided the pyrolysis instrument.

Spectrometer Reads the Chemical Fingerprints of the Samples

The spectrometer's readings are translated into graphs that show single peaks that are easily identifiable phenotypes from which the scientists can infer information about the cell walls. Know the genes associated with the traits, and you gain the ability to manipulate the cell wall to your advantage.

"HTAP provides the information that, combined with other genetic information, tells us there's a gene controlling the plant's cell wall chemistry located somewhere on this chromosome — at the same location every time," Davis said. "Our partners have genetic markers for 1,000 trees and can pinpoint the gene that has an effect on lignin content, cellulose content, or some other factor affecting recalcitrance (the plant's resistance to give up its structural sugars). With that information, the partners can go back and find a tree in the natural population with similar genetic traits or use genetic transformation to introduce the desirable traits."

The data from the chemical makeup is averaged and generated in real time. "If we know what each of these peaks are related to, we can tell what has changed with each sample," Davis said. For example, the ratio of two types of lignin — guaiacol and syringol, or G and S — speaks volumes about how much trouble enzymes will have getting to the cellulose in a particular plant.

"In four minutes, you can look at the spectrum and see that this sample reduces lignin by half — because the S to G ratio has changed by a factor of two," Davis said. Meanwhile, the auto-sampler has already put another sample in place and is ready for a third. "That's information that prior to this would take two people two weeks to acquire."

The speed at which HTAP can analyze samples has launched a new niche market for the tiny cups arrayed on trays that accept the samples. "People send us thousands of samples at a time," Davis said. Now, NREL simply sends universities and companies the large trays of cups. The cups are filled with the samples. Glass fiber disks are used to hold the biomass samples in the cups, which are then sent back to NREL. Quickly sending cups and samples back and forth has slashed the cost of one of the most expensive steps in the process: sample preparation.

HTAP has demonstrated extreme powers of discernment. Growers can determine that some of those identical-looking trees are actually a bit different. Using the information that is provided by HTAP, researchers and breeders can determine what genes in the cloned trees are responsible for the advantageous biofuel potential. And biologists then can graft a desirable cell-wall trait onto a new line of trees.

"We've phenotyped tens of thousands of samples so far," Davis said. "The tool provides a detailed comparison of hundreds of samples a day. Any biomass feedstock type being used for serious biofuels production — chances are, we've tested it."