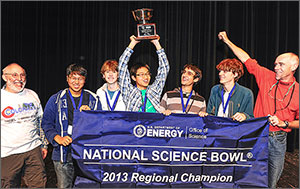 It was a nail-biter of a finish at the 2013 Colorado High School Regional Science Bowl, hosted by the U.S. Department of Energy's (DOE) National Renewable Energy Laboratory (NREL), as a record 42 teams — including 10 schools participating for the first time — competed for a chance to challenge for the national title. The winner of the Colorado Science Bowl travels to Washington, D.C., for the National Science Bowl in April.

After a full day answering rapid-fire questions in physics, mathematics, biology, chemistry, earth and space sciences, and energy and general sciences, Lakewood High School (Lakewood, Colo.) scored a dramatic victory in the final elimination round to claim the Colorado championship and advance to the national competition. They defeated an experienced Cheyenne Mountain High School (Colorado Springs) team, which had made it to the final round of the competition for the third year in a row.

"This is pretty exciting," Lakewood team captain Tommy Fan said. "I felt that we were well prepared, but the competition here is so tough. I was just hoping we'd make it out of the morning elimination round. I'm thrilled that we won and will have the opportunity to represent Colorado at nationals." 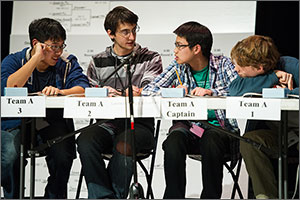 Lakewood won the competition for the first time after participating for 11 years. They came from behind to defeat the Cheyenne Mountain team in the final round with a score of 38 to 16.

Members of the winning Lakewood team will begin their journey for the national title in Washington, D.C., on April 25. DOE and NREL sponsor the Science Bowl program to provide an opportunity for students to embrace science, technology, engineering, and math studies as a primer for collegiate success and future careers.

"NREL is pleased to support the Colorado Science Bowl," said NREL Deputy Director for Science and Technology Dana Christensen. "It is important that we are actively encouraging the next generation of scientists and engineers, and programs like this act as a catalyst to help students make their decisions on what they want to study in the future. Our hope is that based on the positive experience of participating in Science Bowl, a lot of these students will make the decision to pursue a course of study in science or engineering."

More than 15,000 students across the United States compete for a trip to participate in the National Science Bowl. Only about 600 make it. The Lakewood team knows they will need to be at the top of their game as they prepare to go up against the best in the nation.

"We're going to need to study a lot more between now and April and go really in depth," team member Jacob Stufflebeam said. "For this competition we were mostly relying on the science we already knew and focusing on how to apply it to this type of competitive format. But now we are really going to need to step up our knowledge base to be ready for nationals. It's an exciting opportunity to learn more and test our knowledge against the best." 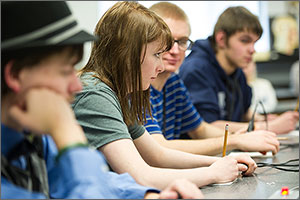 In addition to an exciting finish and first-time champion, the Colorado competition this year was also notable for an explosion in new participation from schools around the state. Ten schools participated in the completion for the very first time.

First-time participants from Ellicott High School (Ellicott, Colo.) were very much in the spirit of the competition with their highly recognizable tie-dyed lab coats. Though they were eliminated in the morning round, the team thoroughly enjoyed the opportunity to be a part of Science Bowl.

"There are a lot of awesome people here, and we're so glad to have a chance to participate," Ellicott team captain Adam Moser said. "It's great to see so many kids out there that are interested in the same topics we are and to have a chance to test our skills against them. We've learned a lot from the experience and look forward to coming back next year."

One first-time school acquitted themselves particularly well in the completion. Tiny South Park High School (Fairplay, Colo.) has just over 130 students in the high school portion of their combined middle and high school. They struggled to find enough students to round out their team. Yet, they performed well enough to come out of the morning competition and win a couple of double-elimination rounds before ultimately being eliminated — all while competing against much larger urban and suburban schools with years of experience in the competition.

"We were really terrified in the first round, and our performance was not very good as a result," South Park High School team captain Shannon Hessler said. "Then we settled down and won the next round, which boosted our confidence. There are some really smart people here, and it felt good to know that we could hold our own with them. And we had a lot of fun, too."

The influx of new participants into the Science Bowl gave more experienced hands an opportunity to mentor the new students. Cheyenne Mountain High School senior Sara Volz has participated in Science Bowl all four years of high school, and her team made it to the final round three of those years. Volz will graduate this year and head off to MIT to study biochemistry, but first offers some advice to new students coming into the Science Bowl program.

"A lot of success in Science Bowl is about what you know," Volz said. "But even more of it is about working with your teammates and helping each other improve. The most important thing is not to get discouraged if you have a bad round or miss a few questions, and to just stay focused on the next one." 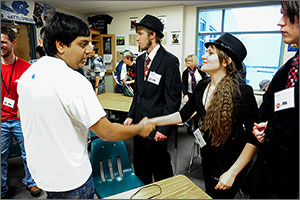 Seeing students like Volz engaged in the sciences inspires NREL volunteer Carolyn Elam, manager of NREL's Energy Systems Integration Facility. "Competitions like this really help to motivate kids around these topic areas, and it's really important for us to support this because they are the next generation of scientists and engineers."

The Colorado Science Bowl is a large undertaking for NREL staff. It takes nearly 70 volunteers to run the competition on the day of the event, and many staffers return year after year. "This is my fourth year volunteering at Science Bowl," said Ian Metzger, an engineer in NREL's Integrated Applications Center. "It's a great experience, and I wish that there was a similar program where I went to high school."

NREL staff continue to participate in the event year after year as an opportunity to support and mentor students to excel in math and sciences.

"This is such a valuable program because it encourages the brightest young men and women in the country to pursue academic paths related to science," Metzger said. "It is really important that NREL and DOE get behind this type of program and encourage these students. We will be counting on them to someday continue the work we have begun in advancing energy efficiency and renewable energy technologies as we strive to overcome present and future energy challenges."