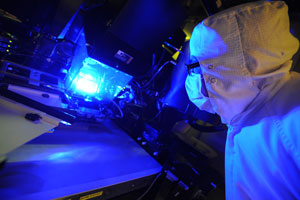 It takes outside-the-box thinking to outsmart the solar spectrum and set a world record for solar cell efficiency. The solar spectrum has boundaries and immutable rules. No matter how much solar cell manufacturers want to bend those rules, they can't.

So how can we make a solar cell that has a higher efficiency than the rules allow?

That's the question scientists in the III-V Multijunction Photovoltaics Group at the U.S. Department of Energy's (DOE) National Renewable Energy Laboratory (NREL) faced 15 years ago as they searched for materials they could grow easily that also have the ideal combinations of band gaps for converting photons from the sun into electricity with unprecedented efficiency.

A band gap is an energy that characterizes how a semiconductor material absorbs photons, and how efficiently a solar cell made from that material can extract the useful energy from those photons.

"The ideal band gaps for a solar cell are determined by the solar spectrum," said Daniel Friedman, manager of the NREL III-V Multijunction Photovoltaics Group. "There's no way around that."

But this year, Friedman's team succeeded so spectacularly in bending the rules of the solar spectrum that NREL and its industry partner, Solar Junction, won a coveted R&D 100 award from R&D Magazine for a world-record multijunction solar cell. The three-layered cell, SJ3, converted 43.5% of the energy in sunlight into electrical energy — a rate that has stimulated demand for the cell to be used in concentrator photovoltaic (CPV) arrays for utility-scale energy production.

Last month, that record of 43.5% efficiency at 415 suns was eclipsed with a 44% efficiency at 947 suns. Both records were verified by NREL. This is NREL's third R&D 100 award for advances in ultra-high-efficiency multijunction cells. CPV technology gains efficiency by using low-cost lenses to multiply the sun's intensity, which scientists refer to as numbers of suns.

The SJ3 cells fit into the market for utility-scale CPV projects. They're designed for application under sunlight concentrated to 1,000 times its normal intensity by low-cost lenses that gather the light and direct it at each cell. In regions of clear atmosphere and intense sunlight, such as the U.S. desert Southwest, CPV has outstanding potential for lowest-cost solar electricity. There is enough available sunlight in these areas to supply the electrical energy needs of the entire United States many times over.

Bending Material to the Band Gaps on the Solar Spectrum 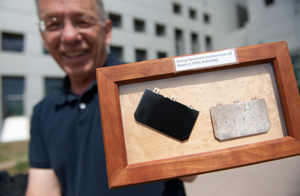 NREL Principal Scientist Jerry Olson holds examples of the first multijunction cells that were developed in the 1980s based on his scientific breakthrough.

Sunlight is made up of photons of a wide range of energies from roughly zero to four electron volts (eV). This broad range of energies presents a fundamental challenge to conventional solar cells, which have a single photovoltaic junction with a single characteristic band gap energy.

Conventional cells most efficiently convert those photons that very nearly match the band gap of the semiconductors in the cell. Higher-energy photons give up their excess energy to the solar cell as waste heat, while lower-energy photons are not collected by the solar cell, and their energy is completely lost.

This behavior sets a fundamental limit on the efficiency of a conventional solar cell. Scientists overcome this limitation by using multijunction solar cells. Using multiple layers of materials in the cells, they create multiple junctions, each with different band gap energies. Each converts a different energy range of the solar spectrum. An invention in the mid-1980s by NREL's Jerry Olson and Sarah Kurtz led to the first practical, commercial multijunction solar cell, a GaInP/GaAs two-junction cell with 1.85-eV and 1.4-eV bandgaps that was recognized with an R&D 100 award in 1990, and later to the three-junction commercial cell based on GaInP/GaAs/Ge that won an R&D 100 award in 2001.

The researchers at NREL knew that if they could replace the 0.67-eV third junction with one better tuned to the solar spectrum, the resulting cell would capture more of the sun's light throughout the day. But they needed a material that had an atomic structure that matched the lattice of the layer above it — and that also had the ideal band gap.

"We knew from the shape of the solar spectrum and modeling solar cells that what we wanted was a third junction that has a band gap of about 1.0 electron volt, lattice-matched to gallium arsenide," Friedman said. "The lattice match makes materials easier to grow."

They concentrated on materials from the third and fifth columns of the periodic table because these so-called III-V semiconductors have similar crystal structures and ideal diffusion, absorption, and mobility properties for solar cells.

That changed in the early 1990s, when a research group at NTT Laboratories in Tokyo working on an unrelated problem made an unexpected discovery. Even though gallium nitride has a higher band gap than gallium arsenide, when you add a bit of nitrogen to gallium arsenide, the band gap shrinks — exactly the opposite of what was expected to happen.

"That was very surprising, and it stimulated a great deal of work all over the world, including here at NREL," Friedman said. "It helped push us to start making solar cells with this new dilute nitride material."

Good Band Gaps, but Not So Good Solar Material 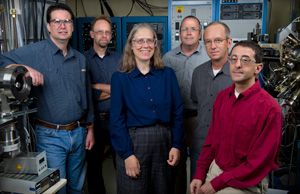 The new solar cells NREL developed had two things going for them — and one big issue.

"The good things were that we could make the material very easily, and we did get the band gap and the lattice match that we wanted," Friedman said. "The bad thing was that it wasn't a good solar cell material. It wasn't very good at converting absorbed photons into electrical energy. Materials quality is critical for high-performance solar cells, so this was a big problem."

Still, NREL continued to search for a solution.

"We worked on it for quite a while, and we got to a point where we realized we had to choose between two ways of collecting current from a solar cell," Friedman said. "One way is to let the electrical carriers just diffuse along without the aid of an electric field. That's what you do if you have good material."

If the material isn't good, though, "you have to introduce an electric field to sweep the carriers out before they recombine and are lost," Friedman said.

"It works great, except you always get a certain level of impurities in the material. That's usually not a problem, but it would be an issue for this novel material, with the gallium arsenide diluted with nitrogen," Friedman said.

A different growth technique, molecular beam epitaxy (MBE), is done in such an ultra-high vacuum — 10 to the minus 13 atmospheres — that it can lower the impurities to the point where an electric field can be created in the resulting photovoltaic junction. And that would make the otherwise promising gallium-arsenide-dilute-nitride material work as a solar cell.

"The only problem was that there was no one in the entire world manufacturing solar cells by MBE," Friedman said.

But that was soon to change.

Partnering with a Startup out of Stanford University: Solar Junction

A Stanford University research group with expertise in the use of MBE for other electronic devices saw an opportunity, and around 2007, they spun out a startup company they named Solar Junction.

Because Solar Junction was a mix of enthusiastic recent Ph.D.s and experienced hands from outside the established solar cell field, "they weren't tied to the constraints of thinking this couldn't be done, that the only economically viable way to make solar cells was with MOVPE," Friedman said.

The federal lab and the startup got together. Solar Junction won a $3 million DOE/NREL Photovoltaic Technology Incubator contract to develop a commercial multijunction cell using dilute nitrides, and also received more than $30 million of venture-capital funding for this commercialization effort. To see more about NREL's Incubator projects, see the NREL news release.

"So Solar Junction had this good idea. But now they had to prove that you could actually make a high-efficiency solar cell with this," Friedman said. "Otherwise, who cares? People can make a lot of claims, but it's very simple to know whether you have a good solar cell or not — you just measure it."

With the new dilute-nitride junction, the germanium layer, which constitutes about 90% of the weight of the cell, is no longer needed. That may not be a big deal when it's part of a huge fixed utility-scale array. But when solar cells are used to power satellites, reduction in weight means a smaller rocket is needed to launch into space, potentially reducing costs significantly. The lighter weight is also essential for the military, which is increasingly asking soldiers to carry backpacks that include solar devices to power electronics.

Serendipitously, if the germanium substrate is retained, it has essentially the ideal band gap of 0.7 eV for a fourth junction, perfect for capturing longer wavelengths of the solar spectrum. That paves the way for a 50%-efficient solar cell in the not-distant future.

The cost to manufacture the SJ3 cell is competitive with that of the industry-standard GaInP/GaAs/Ge cell, according to Solar Junction. Its greater efficiency translates to significant cost-of-energy savings.

According to a report released this fall from IMS Research, the CPV market is forecast to double in 2012 and reach almost 90 megawatts. The World Market for Concentrated PV (CPV) — 2012 predicts installations of CPV will grow rapidly over the next five years to reach 1.2 gigawatts by 2016.

Because of its design and size, SJ3 is an instant plug-in replacement for the standard cell now used by the space and CPV industries. So, for example, if a 40%-efficient cell were replaced with a 44%-efficient cell, this would instantly increase the entire system power output by close to 10%.

"This is really a classic example of NREL developing something and then industry picking it up and running with it and making it a great commercial success," Friedman said. "We started with some very basic materials research. We took it to the point where it made sense for industry to take over and take it to the marketplace."

"We conceived the cell, demonstrated the individual parts, and let the world know about it," Friedman said. "But Solar Junction put all the parts together with record-breaking results, made it work with MBE, and commercialized it at a time when no one else seemed to be interested in or able to do it."

And now, utilities are ordering the SJ3 cells so fast that Solar Junction has depleted its pilot-scale stock and gone into partnership with manufacturer IQE to ramp up to full manufacturing scale.