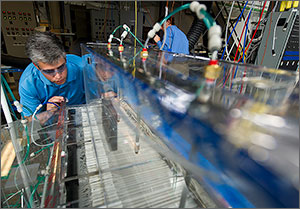 If thirst is crucial to knowledge, then one crucial step in the evolution of air conditioning was born in the 1970s, when Ron Judkoff was a hot, thirsty Peace Corp volunteer in Kedougou, Senegal, one of the warmest places on Earth.

"That's where I really saw the effectiveness of evaporative cooling," said Judkoff, director of Buildings and Thermal Systems at the U.S. Department of Energy's National Renewable Energy Laboratory (NREL). Judkoff was talking about DEVAP, NREL's Desiccant-Enhanced Evaporative (DEVAP) system that works in any climate and achieves comfortable cooling while saving 40% to 80% of the energy use of a conventional air conditioning (A/C) system.

"The Senegalese would make these clay pots to keep water in," he recalled. "The pots didn't feel wet on the outside, but they were semi-permeable. There was enough porousness in the clay that there was evaporation taking place. You could take a nice drink of cold water — and the water would stay cold in the pot."

That semi-porous clay operated in a similar way to the high-tech membranes in NREL's DEVAP system, which recently received a coveted R&D 100 award — often called the Oscars of Invention — from R&D Magazine.

Learning from Indigenous Peoples and the Ancients

During his Peace Corps tenure, Judkoff also noted how indigenous people in Saharan and sub-Saharan climates would effectively cool their buildings with clever use of the spray from fountains and transpiration from plants. He went on to study at Columbia University under James Marston Fitch, a pioneer in bio-climatic architecture, and gained a greater appreciation for the ways ancient peoples and modern indigenous people achieved cooling. They could even make ice in deserts using night sky radiation. They fabricated wind scoops to channel soothing natural ventilation into otherwise stifling buildings.

Later, Judkoff researched desiccants — materials with the capacity to dry out moist air, which are a must if air conditioning is to be comfortable in a hot, humid climate.

In the 1970s, "I had this notion that if we could only combine desiccant and evaporative cooling we might be able to come up with something really important," Judkoff said. "But it was just a notion, because with the materials available at that time, the cost, the weight, the volume — it just didn't look like it would pan out."

Still, Judkoff never completely let go of the idea, and in his early days at NREL he oversaw the first full-scale leap into evaporative cooling at NREL's second building, the Solar Energy Research Facility (SERF). In Colorado's dry climate, evaporative cooling by itself can achieve comfortable indoor climates. But it doesn't work in vast stretches of the United States and parts of the world where the air is too humid. 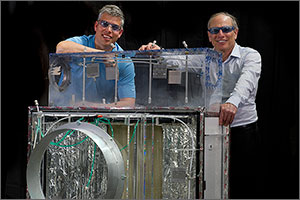 Eric Kozubal, left, and Ron Judkoff stand next to a first-generation prototype DEVAP air conditioner. The new technology predicts an energy savings of 40% to 80% for light commercial buildings. Jason Woods and Jay Burch, also members of the DEVAP team, are not pictured.
Credit: Dennis Schroeder

Other national labs were tasked to try to improve on the elephant in the room — the vapor condensing air conditioner first designed by Willis H. Carrier in 1909. That left Judkoff and his NREL colleagues to look at alternatives to the dominant approach.

A key in combining desiccant drying with evaporative cooling was finding a way to separate the desiccant from the air.

Eric Kozubal, now NREL's principal investigator on the DEVAP cooling system, found a piece of the puzzle in a membrane that mimicks the properties of the semi-porous clay. The holes are so tiny that they're referred to as micro-pores. The membrane allows the desiccant to pull moisture out of the air through the membrane while preventing any desiccant from coming in direct contact with the air.

A DEVAP air conditioner typically has a heat and mass exchanger that has hundreds if not thousands of air passages, each lined with a micro-porous membrane. A mixture of fresh air and building return air flows through these passages, and water vapor gets absorbed into desiccant flowing behind the membrane. Because this water vapor travels through the membrane, it is imperative that the membrane have sufficient permeability.

Simultaneously, adjacent air passages are in thermal contact with the flowing desiccant. These air passages are wetted with water, and a working air stream flows to evaporate this water film and thus remove the heat of absorption from the desiccant. This method of integrating indirect evaporative cooling creates a very efficient way to dehumidify the air. 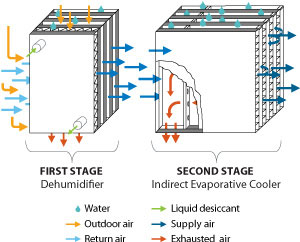 A schematic of the way DEVAP’s evaporative air-conditioning cycle works to first dry the air and then cool it.

"Essentially, we were able to design a heat and mass exchanger with four fluid streams coming into thermal and mass transfer contact," Kozubal said. "We did this in a manner such that none of these streams became mixed with another." This was no simple task, and it was the ability to use membranes to contain the liquid desiccant that enabled such a design.

"It wasn't until advances in membrane technology and careful thermodynamic modeling and design that Eric was able to come up with a method to cheaply and efficiently build such an air conditioner," Judkoff said. There is a ticklish problem called droplet carryover, in which some of the corrosive desiccant gets entrained in the air. That air gets into the duct work and corrodes it. It can also corrode metal fan blades, and in rare cases, structural steel. DEVAP's membrane technology solves this problem.

Once the air is sufficiently dried out, a clever indirect evaporative heat exchanger design allows it to be cooled down enough to cool a building. What comes out is air as dry and cool as the air in Colorado on a nice fall day.

Air conditioning currently accounts for 15% of all electricity use in the United States, and can be as much as 70% of use during hot summer days. DEVAP's first iteration will be for the commercial market; later, it is expected to enter the residential realm.

"We knew we couldn't just slap on any indirect evaporative cooler off the shelf," Kozubal said. "We needed an evaporative cooler that could reduce temperature below the wet-bulb temperature, minimize water usage, and purge air." And they needed to maintain a size and weight similar to conventional rooftop air conditioners for the entire DEVAP package.

To cool the air that will enter the building (called the supply air) from the DEVAP system without adding moisture, Kozubal developed a counterflow indirect design. A small amount of the dry supply air is bled off and fed through an adjacent air channel flowing in the opposite direction to the supply air. That channel has wetted surfaces that cool this "bled-off" air via evaporation. The cold, wet channel then cools the adjacent dry supply air via conduction through the channel walls. The supply air is cooled to about 55 degrees Fahrenheit while remaining dry.

To complete the cycle, the liquid desiccant must be dried out to remove the water it absorbed. To accomplish this, heat is added to the desiccant in another specially designed heat and mass exchanger called a regenerator. The heat drives the water out of the desiccant into an air stream that carries away the moisture and vents it to the outside.

"This air conditioner works by adding heat!" Kozubal said. "We can use natural gas, solar heat, or waste heat from many industrial processes to drive an air conditioner."

"I can foresee a time when this approach replaces most air conditioning in the world," Judkoff said.

DEVAP is an Energy Miser, Too

The other huge advantage of DEVAP is that it is an energy miser. A traditional commercial A/C uses 25% of its energy removing humidity, 75% dropping the temperature.

By contrast, DEVAP only uses energy for that first step — removing humidity. The second step is achieved simply by adding a little water.

"As a cooling process, evaporative cooling is incredibly efficient," Judkoff said. "The fact that we have to put a little energy into drying the air is more than made up for out of the efficiency of evaporative cooling. Especially compared to typical A/C, where you have to use electricity to compress the working fluid."

According to Kozubal, aside from large energy savings, DEVAP has several other advantages over conventional cooling, including:

A typical air conditioner cools the air and dehumidifies it all at once, but not in a controlled way. The limit to how much drying can be achieved depends on how much water condenses on the evaporator coils as the air passes through.

This so-called "wet-bulb limit" is the reason typical evaporative coolers either can't cool things down enough or can't create a truly comfortable space when there is a lot of heat and humidity in the air.

By contrast, DEVAP can provide cooling in any climate. The first stage wrings out all the moisture in the air. Doing so lowers the effective temperature limit the indirect evaporative cooler can achieve. It has a wet-bulb effectiveness of 125% — a huge boon compared to most current technology that has tried to get as close as it can to 100%.

"Developing a brand-new thermodynamic cycle and an apparatus to accomplish this process was difficult," Kozubal said. Conceptualizing this new device required a lot of ingenuity and breakthroughs in materials to become a reality.

"It took a lot of pondering. I spent a lot of time looking up at the ceiling."