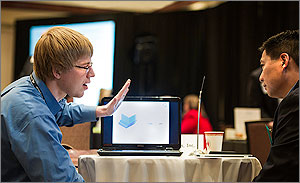 The key to making a pitch is to be engaging, says Douglas Hitching, left, CEO of Silicon Solar Solutions, as he makes a point to potential investor Henry Chung, representing LG Innovation Ventures, during a 10-minute one-on-one networking session at the 25th Industry Growth Forum in Denver.
Credit: Dennis Schroeder

A greener detergent, a better solar-cell coating, an off-the-grid freezer — cleantech entrepreneurs pitched their ideas to money-men and -women in 10-minute bursts at the 2012 Industry Growth Forum last month in Denver.

While the Forum allows growing companies to prepare, refine, and present their businesses to a wide range of investors, it also provides entrepreneurs with many opportunities to connect directly with investors and other clean energy professionals during its One-on-One Networking Session.

This one-on-one networking is the industry's version of speed dating. It was the featured event that launched the two-day Forum, which NREL has sponsored for the past 17 years.

During this session, which featured 56 separate meeting tables set up throughout the ballroom of a downtown Denver hotel, investors, professionals, and government officials cycled through a series of meetings with different entrepreneurs. While the concepts discussed varied wildly, all parties hoped for success, whether it be in the form of a research contract, a business opportunity, or generous funds-in support for the next great cleantech innovation. 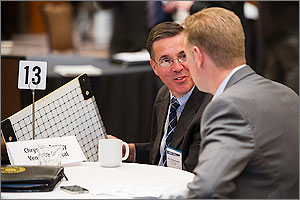 "You just have to keep smiling — and be engaging," said Douglas Hutchings, 29, of Fayetteville, Arkansas, as he hurried from one investor to the next. Hutchings' company, Silicon Solar Solutions, is hoping to commercialize a process to crystallize amorphous silicon into large-grain polysilicon with grains 30 times larger than normal, at half the typical processing temperature. It could — as averred time and again at the Industry Growth Forum — be the next big thing in lowering solar energy costs.

NREL Acts as Broker, Then Lets the Market Work

"'Speed dating' actually describes this particular event pretty well," he said. "This is where a lot of the action happens. We use our convening power to get exciting companies together with investors. We get the conversations started, then get out of the way so the conversations and networking can happen."

"Our favorite statistic is that in the past seven years, companies that have presented at the Forum have cumulatively raised $4.5 billion," Farris added. 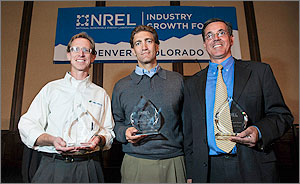 That's a lot of geld.

In all, this event generated more than 600 meetings between the seated professionals and the hundreds of small companies vying for their attention.

Richard Adams, manager of NREL's Innovation and Entrepreneurship Center, noted this was the third year the Forum has had the one-on-one 10-minute meetings.

"The beauty of this is that you can very quickly get a lot of meetings, and you can very quickly get a sense of whether the partner is interested in what they have from a technology perspective," Adams said. "It's no harm, no foul. They can follow up, and if they're not interested, it's a way to narrow down the time they spend looking for investors."

Chris Raczkowski of China-based investment company Azure International said: "We find it a good way to separate the wheat from the chaff. With the 10 minutes, you have a forced conclusion. You get to talk to companies you'd otherwise never talk to, but you can figure out pretty quickly if you might want to do business."

Despite Market Conditions, a Lot of Demand

Kate Cheesbrough, a project manager in NREL's Commercialization Assistance Program, said that despite the pendulum swinging toward unfavorable conditions in the past year or two, "We still had a lot of demand from investors wishing to participate in the one-on-one networking and meet with startups. 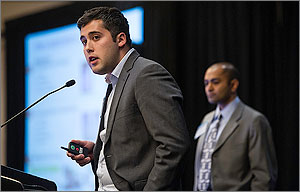 Ben Hernandez of NuMat Technologies, Inc., tells judges that his company's metal-organic frameworks have such large surface areas that they can store the same amount of natural gas, but under lower pressure, which increases safety and prevents leakage. In the background is company CEO Tabrez Ebrahim.
Credit: Dennis Schroeder

"Startups weren't the only ones requesting meetings. We had a number of investors reach out in advance of the Forum to connect them with attending startups," she added. "It's a great way to make an introduction. This year, we're doing it at the onset of the Forum, as it creates a platform for investors and entrepreneurs to begin and expand discussions.

"They get a flavor for what your technology is. If you can't provide a compelling pitch and clearly articulate the company's key value proposition in this short timeframe, that immediately raises a red flag. It's a good first date. If you pass it, there will be further dialogue."

Eight Canadian companies attended, four of them representing geothermal energy, noted Stephen Davis, who is with the Canadian Consulate in Colorado.

"My charge is to maximize the global reach of the Canadian companies," he said. "When I looked at that sea of 56 tables of investors doing this dating dance, I was so impressed. Our companies told us that was worth the price of admission right there." 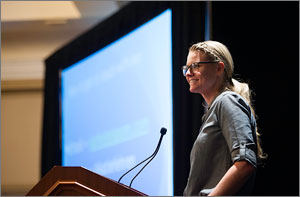 The first morning's networking session was followed by the Forum's premier event that day: formal company presentations. This component of the Forum features 30 companies that have been selected from hundreds of applications to present before panels of judges representing the investor community.

Organized into tracks of similar technologies, such as transportation systems or power components, each company sends a single representative to present an innovation for exactly 10 minutes and then face the judges' panel for an intensive question-and-answer session. The judges provide feedback on the presentation, and then each presenting company receives scores that are tabulated for the Forum's overall competition.

During the chemicals track, a representative of NuMat Technologies, Inc., touted a way of using metal-organic frameworks (MOFs) to increase the storage capacity of natural gas. MOFs have the highest surface area per gram of any absorbing material. That asset means a car's fuel tank can store as much natural gas as before, but under lower pressure, which enhances safety and prevents leakage. Or, it can store much more natural gas under the same pressure, increasing range.

Another company, Lotus Leaf Coatings, presented its hydrophobic and hydrophilic coatings that can either repel water or attract it as a way of keeping lenses, solar panels, or a variety of other products clean. CEO Lawrence Chavez mentioned a $19.5 billion market, noting that the coatings' customers can range from ophthalmology to heating and cooling.

The coatings may have to last 20 years in the United States — but in some parts of the Middle East, if they last just a few months, they'll be a great improvement over the current reality, in which once a week someone has to wipe clean the mix of desert dirt and high humidity that gunks up solar panels.

The Judges' Choices for the Most Marketable Technologies 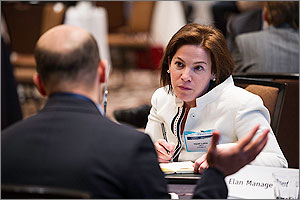 CEO Heidi Lubin of Hybrid Electric Vehicle Technologies (HEVT) talks with Joshua Posamentier of Elan Management about the importance and potential of her company's cleantech motors during a one-on-one networking session at the Forum.
Credit: Dennis Schroeder

Carbo Analytics of Fort Collins, Colorado, won one of the Outstanding Venture awards for its real-time sugar analysis using a microchip with electrochemical detection.

The other Outstanding Venture award went to 7AC Technologies, Inc., of Massachusetts, which is commercializing a novel membrane-based liquid desiccant system for commercial buildings that will keep them cool in the summer and heat them in the winter.

The top prize – the Best Venture award – went to Silver Bullet Water Treatment LLC of Denver. This company has developed a cost-effective and environmentally responsible water treatment solution for cooling towers. The technology can be used in office buildings, hospitals, data centers, and other commercial locations throughout the United States. Its proprietary electrochemical water treatment system eliminates microorganisms and scale formation without adding any harmful chemicals.

Silver Bullet CEO Steve Bachar said: "This is an amazing gathering because, for one, everyone here cares about finding a way to make the world a better place. And we also all care about doing it in a way that helps create strong companies and moves the technology forward in the marketplace. It's inspiring to be in a roomful of people who care about that."

After the awards ceremony, as entrepreneurs and investors lined up for the elevators, one venture capital representative said there's an advantage to attending the Forum even during a down year. "So many of these companies are undervalued," said the investor, who did not give his name. "It's a great time to jump in."