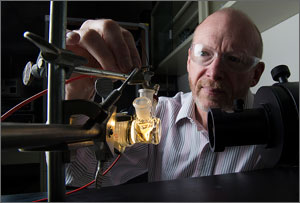 Back in 1998, when gasoline prices were $1.03 per gallon, John Turner of the U.S. Department of Energy's (DOE) National Renewable Energy Laboratory (NREL) dropped jaws all over the energy world by demonstrating that he could use sunlight to extract hydrogen from water at a remarkable 12.4% efficiency.

Three hundred articles and news reports followed, there were predictions of the next big thing, and then … almost nothing happened.

Energy companies went back to their gasoline and their diesel, or their attempts to extract fuel from biofuels, or to extract hydrogen via algae or coal-powered electricity.

Now, with gasoline at $3.89 per gallon, and still the dominant transportation fuel, there is renewed interest in Turner's work.

Last month, the Japan Society of Coordination Chemistry awarded Turner with its first Lectureship Award for his pioneering work in the fields of solar hydrogen and fuel cells and for being an international spokesman for hydrogen production via photoelectrochemical water splitting. "It was quite an honor to be recognized that way," he said.

"It's what I've been doing for 30 years, pushing this technology into new areas that are more fruitful," Turner added. "People are looking at climate change, looking at solar fuels. The tsunami has people in Japan rethinking nuclear, plus they import 90% of their oil. Countries are looking at technologies that give them greater energy independence." 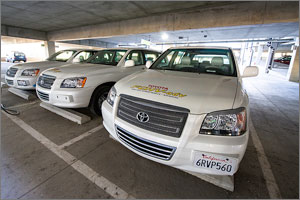 At the recent Sustainable Mobility Seminar at NREL, reporters toured the parking garage where hydrogen fuel cell vehicles and electric plug-in vehicles awaited test drives. The car in the forefront can be resupplied with hydrogen at NREL's National Wind Technology Center 15 miles north of the main campus.
Credit: Dennis Schroeder

As often happens in science, researchers are turning back to a breakthrough that had lost momentum.

In 2010, DOE established the Joint Center for Artificial Photosynthesis at the California Institute of Technology (Caltech) as one of its Energy Innovation Hubs, with the aim to find a cost-effective method to produce fuels using only sunlight, water, and carbon dioxide as inputs.

It's photosynthesis without the green stuff. Turner uses multijunction solar cells made mostly from elements in the third and fifth columns of the periodic table, such as gallium, arsenic, and indium. These so-called III-V solar cells still work the best.

NREL also funds research through its Laboratory Directed Research and Development Program aimed at trying to make alloys that combine the benefits of the III-V elements with the strengths of elements such as cobalt, manganese, phosphorous, or titanium. The trick is to combine the materials in such a way that they are not only stable and robust but also have the right band gaps to generate enough voltage to split water.

Turner, who has been with NREL since 1979, says the cleanest way to produce hydrogen is by using sunlight to directly split water into hydrogen and oxygen.

The amount of greenhouse gases such a method can save is almost unfathomable. Consider that in the United States alone, 9 million tons of hydrogen are made each year, much of it in petroleum refineries and primarily via a process called steam reforming of natural gas.

For each kilogram of hydrogen produced that way, about 12 kilograms of carbon dioxide are produced. A process that could replace all that natural gas reforming with the sun and water can save 100,000 trillion kilograms of carbon dioxide from reaching the atmosphere each year. Hydrogen produced from water and sunlight can replace natural gas reforming if it is made near the refinery and used in place of the hydrogen typically made from reforming.

It won't be easy. In fact, Turner says that the reason his initial breakthrough lost momentum is that improving the technique "was hard work, and people don't like to do hard work."

Better technology, the cost of gasoline, and worries about nuclear power in the post-tsunami era have combined to make researchers believe water splitting may be worth the hard work. Turner's pioneering work — and the renewed enthusiasm for it — is leading researchers in several directions. 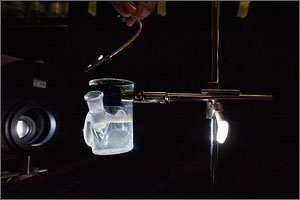 Turner's NREL colleagues Dan Ruddy and Nate Neale are researching new materials that can duplicate the elegance and efficiency of the 1998 breakthrough, but are robust enough to remain stable hour after hour, month after month.

They're getting help from the Center for Inverse Design, a DOE Energy Frontier Research Center that uses theory and supercomputing to first come up with the ideal properties of a new material, then find the mix of chemicals that holds those properties.

The aim is materials that can regenerate even as they disintegrate. It's something the human body can already do, from replacing plasma every 48 hours to regenerating a new stomach lining every five days.

Some metal oxides look particularly promising, Ruddy and Neale said. They're plenty stable, but typically have large band gaps — meaning the gap between the band that can conduct energy and the band that cannot is too wide to allow for efficient conversion of photons into electrons.

Ruddy and Neale are taking hints from some previous work at NREL that combines several layers of semiconducting material into a solar cell that has multiple junctions and thus has ideal band gaps to capture the sun's energy morning, midday, and afternoon.

"We're seeing a lot of promise in some of these new materials," Neale said.

Researchers at MIT are bonding a solar cell to a newly developed catalyst to try to efficiently use the sun to split water into hydrogen and oxygen. The catalyst of the so-called artificial leaf is made of earth-abundant, inexpensive materials, mostly silicon, cobalt, zinc, nickel, and molybdenum. Like the NREL approach, MIT's needs no external wires or control circuits to operate.

"John Turner's work was seminal," said MIT and Harvard chemist Daniel Nocera. "He set a new path for photoelectrochemical cells. Before Turner, the path of photoelectrochemistry was to have materials that absorbed light and did the catalysis of water splitting. Turner separated the function of light collection and charge separation from catalysis in his now-called 'Turner cell.'

"The field was slow to pick up on this," Nocera added. "But we followed Turner's lead, and with the development of new catalysts — and by following Turner's approach — we were able to develop a buried junction comprising earth-abundant materials."

The Longer and Shorter Visions for Hydrogen 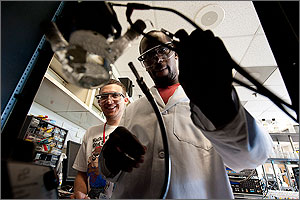 Turner envisions a day when the United States and other nations depend by and large on domestically produced hydrogen as an energy carrier for transportation, heat, and electricity. No pollution, no dependency on foreign oil, no national security worries.

"In my view, a hydrogen economy is inevitable," Turner said. "Simply because we can't run on fossil fuels forever, and hydrogen makes the most sense when it comes to building a sustainable infrastructure." Turner says the two big visions for the hydrogen economy are its use in fuel cell vehicles and in producing ammonia, which is essential for food production.

"I'm talking about a system that will last for millennia."

Neale and Ruddy take a shorter-term view. They can envision solar-powered water splitting replacing reforming natural gas as the way refineries produce the hydrogen that is used to remove sulfur from petroleum or to convert heavy crude into lighter, easier-to-refine products.

If all the hydrogen were pulled out of a gallon of water, that amount of hydrogen would have 40% of the energy equivalence of one gallon of gasoline.

One challenge is the amount of solar cells needed to generate as much hydrogen fuel each day as a typical large oil refinery does. "You might need a few square miles of solar arrays around the refinery," Neale said.

Another hurdle is to show that the process will work as well when it is boosted to manufacturing scale. Recent NREL analysis indicates a path to getting a gallium-arsenide-based solar cell down to about $2 per watt. Using that as the base for the Turner water-splitting device would produce hydrogen at about $3 per kilogram. That would make it fairly competitive with gasoline. A kilogram of hydrogen can propel a car almost three times farther than a gallon of gasoline, but because hydrogen is so light, a vehicle's gasoline tank would provide a greater range than a vehicle's hydrogen tank.

Solar Power for the Long Run

Millions of middle-school students have done the basic experiment: Use an electric source and clamps to electrolyze water and watch the bubbles of hydrogen climb to the surface.

Using the sun and a solar cell eliminates the need for electrolyzers, or anything else that needs a fossil-fuel source.

"This has been languishing in the weeds, and now all of a sudden it's in the forefront," Turner said. "Our funding has been zeroed out twice, but in the past few years we've seen more interest." In fact, Turner already has given 23 invited talks on hydrogen in 2012, a personal record for talks in a year.

"I'm optimistic — if people will focus on the right concepts," Turner said. "That's what's necessary to make this field viable. It's going to take a new material, and people haven't been interested in looking at new materials. Now they are."

Of course, there are other pathways to produce hydrogen, including using biomass or algae, or extracting hydrogen using extreme heat. "The one that has the lowest cost for the hydrogen is the one that will prevail," Turner said.

NREL has a hydrogen filling station at its National Wind Technology Center, the stored hydrogen coming from solar- and wind-powered water splitting. And NREL houses the data repository for DOE's technology validation project on the performance of fuel cell vehicles.

On Track to Being a Scientist Early

Turner was sure of his future career when he was 12 and first saw the word "scientist" written on a blackboard in his Idaho elementary school.

"I saw the word, and I knew that was me," he said. "I came home and told my mom I was going to be a scientist. She said, 'That's cute, Johnny. Tomorrow you'll want to be a fireman.'

"But it never changed. In high school I took calculus, chemistry, physics, and biology, and decided on chemistry."

Water and the Sun: For the Long Haul

Turner was a celebrity for a short while in 1998. His paper on using the sun for water splitting even inspired a film starring Keanu Reeves titled "Chain Reaction" about a hydrogen-fueled economy being the Earth's last best hope.

"We need a chemical energy carrier like gasoline, petroleum, methane, that carries energy in chemical bonds," Turner said. "It's all stored sunlight. That's what hydrogen represents."

Turner has some greats in science and literature on his side.

In Jules Verne's 1874 novel "Mysterious Island," a protagonist says: "Yes, my friends, I believe that water will someday be employed as fuel, that hydrogen and oxygen which constitute it … will furnish an inexhaustible source of heat and light … Someday water will be the coal of the future."

And in 1931, shortly before he died, Thomas Edison told his friends Henry Ford and Harvey Firestone: "I'd put my money on the sun and solar energy. What a source of power! I hope we don't have to wait until oil and coal run out before we tackle that."

Turner puts it this way: "How much coal will we have in 75 years or 200 years? We have enough coal for ourselves and our kids, but what about our grandkids and great-grandkids? The sun and the wind are intermittent resources. We'll run out of fossil fuels. But the sun and water will be around for a long, long time."