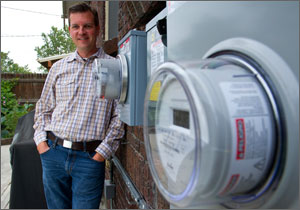 The Green Button program makes it easier for consumers to track their energy use and find ways to save on utility bills. Joe Lucas stands next to his photovoltaic meters outside his Denver home. He is participating in the Solar Benefits Colorado employee solar discount program.
Credit: Dennis Schroeder

Thirty-one million American homes will be getting computer-friendly data about their electricity use from their utility companies, thanks to the work of the U.S. Department of Energy's (DOE) National Renewable Energy Laboratory (NREL) and a nudge from the White House.

The new consumer tool is called Green Button, and customers can link to it from their utility companies' portals. Green Button, based on exacting standards, helps consumers make informed purchase decisions and adjust electricity use to save both energy and money.

The Green Button initiative's main goal is to simplify energy data access for consumers. The federal government is encouraging utility companies to give consumers the ability to easily access and share their own energy use information for insight into how best to manage their consumption.

Green Button is an example of the government encouraging industry to accelerate the adoption of a standard, rather than issuing a federal mandate. The goal is better-educated energy consumers — which can be good news for both the planet and consumers' bank accounts. 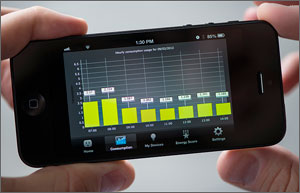 Kill-Ur-Watts is a Green Button app developed by KeyLogic Systems through its participation in the U.S. Department of Energy's Apps for Energy challenge. Kill-Ur-Watts permits residential energy consumers to view, track, and manage their electricity use over time. The application is available through utilities participating in Green Button, and can be downloaded for free in the iTunes app store.
Credit: Dennis Schroeder

Green Button is based on a standard developed by a working group of the North American Energy Standards Board (NAESB) at the request of the Smart Grid Interoperability Panel, a public-private partnership. The Energy Service Provider Interface (ESPI) standard brings together work done by ASHRAE, the EIS Alliance, IEC, and NAESB into a single specification for exchanging energy use information between utilities, customers, and third-party application developers. Having a common data format opens a broad market for entrepreneurs to develop innovative products that help customers understand and manage their energy use and utility bills.

Green Button is a White House initiative. Aneesh Chopra, former U.S. Chief Technology Officer, announced the start of the initiative on Jan. 18. It was initially adopted by three of California's largest utility companies.

NREL was integral to the development of the standards for Green Button, as well as a consistent way to report the data. NREL's Scott Crowder noted that NREL-developed OpenEI.org provides a place for application developers to make their Green Button apps available. 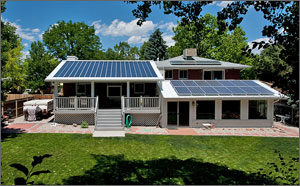 Homeowners with strong environmental ethics can use Green Button applications to further reduce their carbon footprints. Brent and Mo Nelson's house in Lakewood, Colorado, was built in 1956 and has been retrofitted with solar technologies including daylighting, passive solar, two kinds of photovoltaics, and a solar hot water heater.
Credit: Dennis Schroeder

Once logged into the utility's website, customers see a Green Button icon. Customers click the button to download their personal energy use data in the common format defined by the ESPI standard, which was developed jointly by industry and government. To learn more about the data, they upload it to any of several Green Button apps. Future versions of the standard will allow customers to set up a secure subscription so they will no longer have to manually transfer the data from the utility to their favorite apps.

Many of the apps on OpenEI came by way of DOE's recent "Apps for Energy" challenge, intended to spur app developers to come up with tools to help define energy-saving strategies.

For example, customers can upload their data to one app for a "no-touch" energy audit that will show them how to save energy. The audit can show them that, say, running their dishwasher at times when there is little other demand for electricity will help avoid paying peak-demand rates, said Monisha Shah, who is on assignment with the White House to help promote Green Button.

One Apps for Energy award winner quantifies energy savings in terms of the number of trees saved. "That is a great embodiment of the challenge as a whole," Shah said. "They're boiling down a complex concept to a simple one."

Thanks to the initiative, the number of Green Button applications housed on OpenEI skyrocketed from six to more than 60, Shah said. Innovation spurs innovation, and the number of apps is expected to continue to grow.

See more than 60 Green Button apps and a short description of each.