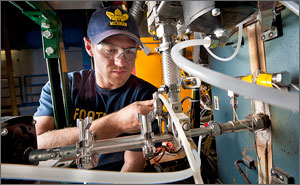 NREL intern Dennis Paul works on a new feed auger he designed and built for use in catalytic pyrolysis of wood at the Fuel Synthesis Catalysis Laboratory at NREL.
Credit: Dennis Schroeder

They come from the Ivy League, land-grant universities and community colleges, with interests from the theoretical to the practical, to research solar cells, wind turbines, biofuels, computer modeling, analysis, and chemistry.

They're the 59 summer interns at the U.S. Department of Energy's National Renewable Energy Laboratory and they're doing real research that generates real results to be published in real scientific journals.

Some were spurred by a caring high school teacher or an inspiring professor; others have had their eyes on NREL since they assembled a car for the solar races in middle school or participated in the Science Bowl in high school.

For 10 weeks every summer, college students from across the county migrate to Golden, Colorado, to work side-by-side with top researchers at the only national laboratory solely focused on renewable energy and energy efficiency research and development. This summer, there were 59 interns in four different programs. The largest program is the Science Undergraduate Laboratory Internship.

The summer internships are NREL's premiere workforce development program "to ensure that DOE, NREL and the nation have a sustained pipeline of highly skilled workers in science, technology, engineering and mathematics," NREL Education Program Coordinator Linda Lung said. It's not uncommon for interns to eventually be hired as NREL researchers.This summer, for the first time, community college students were included in the roster of interns. 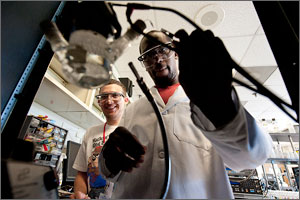 Dennis Paul, who attends Washtenaw Community College in Michigan, used his practical and theoretical skills to build a tool that controls the flow of biomass into a fluidized reactor that converts sawdust and pellets of New England hardwood into fuel.

He designed a three-eighth-inch diameter, two-foot-long auger together with housing, transfer tubes and bearings. The precise flow of nitrogen gas keeps the bed warm and at a stable temperature.

"It was great," Paul said. "Our results were more significant than we expected. We found that keeping the temperature at 470 degrees Celsius instead of 560 Celsius produced a lot more high-quality hydrocarbons such as toluene and xylene, and less benzene that you don't want.

"We found that cracking happens at a very specific temperature, and we were able to hold it a very steady temperature to make sure the catalyst works."

Paul, who plans to transfer to the University of Michigan next spring, said he saved about $20,000 by going the community college route, "and in my physics and chemistry intro courses, I had classes of 30 instead of classes of 800 at the U."

Paul said his original goal was a mechanical engineering degree, but the work that seems most fun and challenging to him at NREL is being done by chemical engineers, so now he'll pursue that. "We'll see where it takes me."

"My dad was a skilled tradesman, and when something broke in the Paul residence, we fixed it," Paul said. He recalls the time on a family road trip when the van broke down. He and his father cut fuel lines, drilled a hole on one side of the dual gas tank, siphoned gas, switched lines, slathered some mastic, and went along their merry way.

"We were extremely pleased with Dennis," Iisa said. "I've only heard praise about him from everybody who has worked for him. He was really an outstanding intern, with a very good work ethic."

Iisa said the NREL internships often lead to career jobs at NREL. "But it also gets more people interested in renewable energy, even if they never go to work at NREL."

Paul's project "was something that was really valuable to our program, but which we would never have had the time and resources to do if it wasn't for the extra help during the summer," Iisa said. "The community college interns are very motivated, and for the most part interested in continuing their studies. At least in Dennis's case, we also got more practical skills than we often get with university interns." 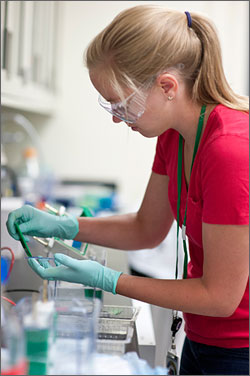 NREL intern Sarah Stahl works on samples of bacteria used in biofuels research in the photobiology lab at the Field Test Laboratory Building at NREL. It is part of a process to bioengineer bacteria to increase fatty lipid content.
Credit: Dennis Schroeder

Esther Chan is from the two-year Canada College in Redwood City, Calif., with plans to transfer to the University of California at San Diego.

She tested two semi-truck cabs and two electric vehicles for a long-term project that tries to use different paints and reflective materials to keep the interiors from getting too hot or too cold.

"We're trying to figure out new ways to reduce the amount of gallons used."

This summer, Chan set up a data acquisition system to gauge interior temperatures in the trucks and cars. She installed thermocouples in several different places in the vehicles; the trunks of the cars look like a full spaghetti dinner worth of red wires.

She tested on July 20, the mid-summer day when the solar load is most likely to be at its maximum. The instrument panel on one of the vehicles shot up to about 66 degrees Celsius, — more than 150 degrees Fahrenheit.

"Next year, we'll look at what different paints and other solar reflective material can do to reduce thermal load," she said.

Out of high school, Chan wasn't sure what she wanted to pursue. Watching a Discovery Channel show on future car concepts and in particular hydrogen fuel cells "blew my mind," Chan said. "I said to myself, 'I have to do this.' So I just went for it and I haven't looked back."

She calls the NREL internship "my greatest experience ever. I learned so much."

Analyzing Wave Energy in the Lab

Chris McComb, who just graduated from California State University at Fresno and will be attending Carnegie-Mellon University in Pittsburgh in the fall, is spending the summer at NREL modeling waves to advance knowledge about the potential of wave-generated energy off the European and American coasts.

"My mentors have been great," McComb said. "They're both post-docs and very easy to relate to. They know a ton and are willing to share it.

"Every Friday, we get together with our mentors for a research update. It's really cool to see what everyone else is doing," McComb said. "You want to keep up with the Joneses."

Hours in the lab are long, but there's still time for fun. "We get together," McComb said. "We've gone to a few breweries, several pot lucks."

His interest in environmental sciences sprang from his boyhood in California's Central Valley. "In the mornings, we'd drive into the valley and see this blanket of smog. Seeing that disparity between the clear skies higher up and the smog in the valley is what inspired me to get into science."

Natalie Bodington in her third summer as an NREL intern, just graduated from Brown University in Providence, Rhode Island.

This summer, she worked on a model that finds the best places in Colorado to site wind and solar farms in order to meet the state's mandate of 30 percent renewables by 2020.

"We have a huge database looking at hourly profiles of the wind and solar resource," she said.

"I started out very much hands-on with experimental materials," Bodington-Rosen said. "This summer I transitioned to something more market oriented, focusing on modeling; which is in line with my thesis. It was great to make that transition.

After graduation from Brown, she plans to do a little traveling and then "test the job market" before going on to graduate school.

Tabitha Evans, from the University of North Dakota, spent 10 weeks helping design an instrument, then analyzing alkaline metals in three types of biomass to see how eucalyptus fared compared to pine or switchgrass.

"We used a process that allowed us to get rid of all the organic materials, so we would just see the metal," she said. Using a sample boat, a furnace and a skimmer, she heated and ionized the samples to get a precise read on the amount and kind of metals mixed in with the biological material.

"We found that eucalyptus had more metals than pine, but less than switch grass," which keeps eucalyptus in the running as a possible biofuel heavyweight, she said."

Evans said "I loved this internship. My idea of government lab work had been what you see in the media, people in fancy white coats in a perfectly clean lab.

"That wasn't my experience at all. I worked in a real interesting space and I had to build the instrument. I didn't realize you got to do things like that. I loved being a part of that."

Her NREL mentor was Calvin Mukarakate who praised Evans for "her hard work and her ability to do things by herself. She was in on the design of the whole instrument and she tested it and it worked well. She's a self-starter."