Microgrids: So Much More than Backup Energy 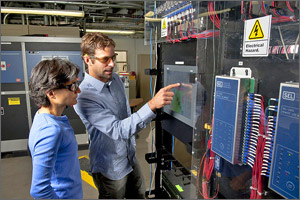 While very reliable today, the U.S. electricity grid is old and has gone at least five decades without a significant technological upgrade. There are two prongs to the microgrid work at NREL: innovative research and partnering with industry.
Credit: Dennis Schroeder

Most Americans don't have to think much about energy reliability. We plug in a computer and it powers up; we flip a switch and the lights come on.

While very reliable today, the U.S. electricity grid is old and has gone at least five decades without a significant technological upgrade. The U.S. Department of Energy's (DOE) National Renewable Energy Laboratory (NREL) is working with industry on one solution to help maintain a secure, reliable flow of energy: microgrids.

A microgrid is a smaller power grid that can operate either by itself or connected to a larger utility grid. Microgrids can serve areas as small as a few houses, all the way up to large military installations.

"If your home was part of a microgrid, you could continue to receive power even when the utility power goes out," NREL Electrical Engineer Mariko Shirazi said. "It gives you the ability to ride through any disturbances or outages by seamlessly switching over to locally generated power."

It's important to note that a backup power system — like a diesel generator — is not the same as a microgrid. Backup generators supply power to local loads in the event of an outage, but there is usually a delay or blip when you lose power and disconnect from the utility grid before the backup kicks in. In addition, a backup system is never meant to run continuously, nor to put power into the grid. However, the reverse is true — a microgrid can serve as a backup power supply.

A microgrid senses the quality of the power flowing through the grid. In the event of an outage, it can disconnect from the grid at a moment's notice. It can also leverage solar, wind, or stored energy to supplement a dip in the current power supply. If things are running smoothly with the regional grid, a microgrid generating electricity from renewable sources can export that clean energy to the grid for everyone's use. 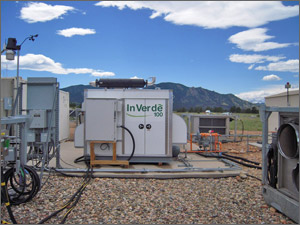 The major components of a microgrid include a source of power generation, local loads, and electrical switching gear. It might also include inverters and energy storage — all of which sounds easy enough to just connect up to get started, right?

"These technologies are in different stages of maturity; the challenge is to get them all to operate together in a stable, concerted way to accomplish the goals of efficiency, security, and energy reliability — all of which are required from a microgrid," NREL Electrical Engineer Greg Martin said.

There are two prongs to the microgrid work at NREL: innovative research and partnering with industry.

NREL works with industry to test microgrid systems by providing the experts as well as the infrastructure to support microgrid testing. The U.S. Department of Defense is also working with NREL researchers to examine using microgrids to improve base reliability. Testing includes using grid simulators, load banks, and generators, all currently at the Distributed Energy Resources Test Facility at the National Wind Technology Center near Boulder, Colorado.

"We use equipment such as a grid simulator to create a virtual electric grid to test equipment that is planned to be connected to a utility," Martin said. "We create outages, or some other kind of electrical phenomenon, to make sure the equipment operates as expected. We basically try to make stuff work while making sure it works the way it's supposed to."

"Utilities need to be shown that this technology is safe to integrate into the system and won't affect the normal operations," NREL Energy Systems Integration Director Ben Kroposki said. "One of the goals at NREL is to provide that test bed for a variety of scenarios to be run so that utilities can see that the risk is being reduced."

An example: take a 200-kilowatt microgrid in a residential area with 100 kilowatts of photovoltaics (PV) installed on homes. When all the homes are grid-connected through a local utility, those 100 kilowatts of PV are no big deal. But once the homes are disconnected from the grid, that's a high ratio of PV. Researchers work with industry to figure out which resources have to be maintained to keep the power reliability needed for critical loads. Key questions include, should the homes start shedding loads if a cloud crosses the sun and the PV power drops? Or is energy storage needed, so when a cloud comes, the power supply stays consistent?

NREL is leading the way in understanding issues in energy systems integration and helping industry work through them. The lab's research tools will get a boost when the Energy Systems Integration Facility (ESIF) is completed later this year.

Taking Research to the Next Level 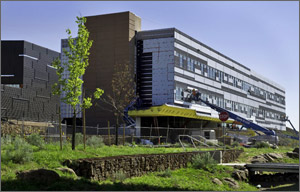 NREL is leading the way in understanding issues in energy systems integration and helping industry work through them. The lab's research tools will get a boost when the Energy Systems Integration Facility is completed later this year.
Credit: Dennis Schroeder

"ESIF is going to be like our current lab on steroids, and will expand our testing scale to 1 megawatt," Martin said. "We'll be able to test large single components like large utility-scale inverters. We'll also be able to scale up the complexity of our testing. Using the Research Electrical Distribution Bus [REDB], and hardware-in-the loop, we'll be able to connect dozens of sources and loads and be able to test their interactions with each other. Now, we collect single data points. At ESIF, we'll be able to collect high-speed, time-synchronized data at numerous points throughout the REDB."

Using a high-performance computing data center, NREL will be able to simulate entire distribution systems. When testing a microgrid system, engineers can monitor its voltages and frequencies at the point where it joins the distribution system, enabling them to simulate the effect of a microgrid on the larger utility. This is important, because being physically connected to the grid is often not practical — plus, the utility doesn't have to worry about putting an unproven technology on their system.

"Utilities see this as a growth area, and they would like to understand it," Shirazi said. "Even if they aren't implementing a microgrid themselves, they may want to understand how it works for those customers who do want to install one on a section of their distribution system. Working with NREL helps them implement this type of system without impacting their customers."

NREL's grid simulators make this testing possible without hooking up the equipment to the regional utility grid — which would be prohibitively tricky. First, researchers would need the foresight to know when voltage anomalies were going to happen, and assuming they could catch them, there would be only one chance to test equipment. With grid simulators, researchers can create voltage and frequency anomalies and see how the system behaves.

"ESIF is going to give us more research power, both in the actual electrical power but also in the ability to collect data across all points in the system," Martin said. "It will also offer really awesome visualization that will enable us to look at data coming in from different places, to look at simulations and video feeds, in a really nice, easy, big way. We're sure this visualization capability will help ignite collaborations among NREL, industry, utilities, academia, and government agencies."

"ESIF is really going to move us forward to the next generation of power systems in this country," Kroposki said. "There is consensus that our utility grid is aging and that we can get benefit out of making it more intelligent, efficient, and capable of accepting more sources of energy."