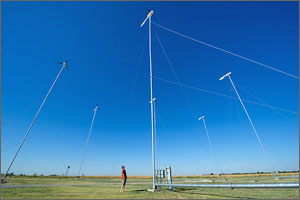 Seventeen executives traveled through middle America last month and came away amazed by the can-do spirit alive in the heartland, in awe of how those connected to the land overcame disaster and economic crisis to embrace renewable energy.

The 17 were members of the 2012 class of the Executive Energy Leadership Program (Energy Execs) run by the U.S. Department of Energy's (DOE) National Renewable Energy Laboratory (NREL). Each of them — representing private business, local, state, and federal government, and nonprofits — will use the program to bring back to their workplaces an idea to enhance sustainability or build renewable energy projects. The field trip complemented classwork done at the NREL campus on the practical outgrowth of research in renewable energy and energy efficiency.

The Energy Execs traveled by bus from Denver to Lamar, in the southeast corner of Colorado, to meet with economic-development and community leaders and see one of the largest wind farms in the nation. They then rode on to Greensburg, Kansas, site of a devastating 2007 tornado — and now site of the most LEED Platinum energy-efficient buildings per capita of any town or city in the world.

"To see them embrace these technologies, to bring their care for the land and their conservation values to the newest technologies … that's pretty impressive," said Charles Allison, Jr., an associate professor in finance, energy policy, and sustainability management at the New School in New York City. "Understanding who they are goes a long way toward knowing how to integrate energy efficiency into their towns." 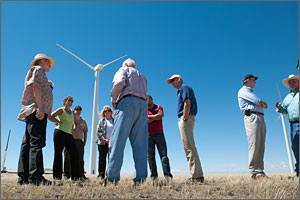 Bob Emick, center, with back to camera, speaks to the Energy Execs at his ranch in Lamar, Colorado. The ranch hosts a wind farm with 98 1.5-megawatt wind turbines, powerful enough to provide electricity to tens of thousands of households. Bob's son Greg, at the right, wearing a cowboy hat, told the group that the turbines provide the family with a steady income.
Credit: Dennis Schroeder

In Lamar, the Energy Execs visited the Emick family ranch, where 98 1.5-megawatt wind turbines rotate at speeds of up to 24 rotations a minute, bringing electricity to tens of thousands of homes — and where in the blazing sun, cows find shade in the turbines' shadows. It's part of a 150-turbine wind farm that spreads from Prowers County to Bent County to the east.

"NREL approached my dad and said they wanted to put up some meteorological towers to study the wind," rancher Greg Emick earlier told a gathering of the Energy Execs, the Prowers County Economic Development organization and other policymakers from Prowers and surrounding counties. "They spent five years studying the wind, and they found that we had a really good wind resource here."

Xcel Energy got interested, and in 2003, during a six-month span of busy construction, the Colorado Green Wind Power Project built 98 turbines on Emick's land, with another 10 on nearby property. In addition to the Colorado Green Project, Lamar Light & Power generates electricity from their own two turbines.

The wind farm gives the Emick family a steady income and adds $400,000 a year to Prowers County's coffers. That "may seem insignificant, but down here that is very significant," said County Commissioner Gene Millbrand. During construction, there were 250 jobs; now there are about 20 well-paying jobs. "I don't know how our county could have survived this recession had it not been for the stimulus and the revenue we get from this wind farm."

Emick and Millbrand said there was near-universal agreement among residents that wind energy would be a good thing. Why? Well, there are the jobs and the tax revenue, and besides, said Emick, "It beats ranching."

The tour of the Emick farm provided an unexpected historic perspective when family patriarch Bob Emick presented his barn containing dozens of antique but freshly painted windmills, each a work of art in itself, adorned with the finest in 19th-century script. Another 40 of Bob Emick's windmills are on display at the American Wind Power Center in Lubbock, Texas.

"I just can't get over the irony of Mr. Emick being into those windmills, collecting them for 30 years, and the serendipity of having 98 wind turbines put on his land," said David Warner of NREL. "His own hobby and interest played out for him and his family in a very big way."

Town Embraces Its Values to Rebuild 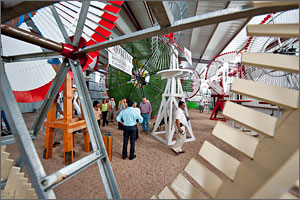 Energy Execs visit the barn where Bob Emick keeps his collection of vintage windmills near Lamar, Colorado. Participants said it was a pleasing irony that a rancher who has one of the nation's best collections of ancient windmills now hosts 98 modern wind turbines on his acreage.
Credit: Dennis Schroeder

Then it was on to Kansas.

Greensburg, Kansas, is about 100 miles west of Wichita, in Tornado Alley — no more so than the evening of May 4, 2007, when an EF-5 twister smashed into town, destroying 95% of the structures.

It was just one more slowly dying rural Kansas town until then, its chief attraction the Big Well, the largest hand-dug well in the nation, said Superintendent of Schools Darin Headrick.

The destruction was too much for some, who relocated, dropping Greensburg's population from about 1,400 to fewer than 1,000. But those who remained were steadfast.

At the first post-tornado town meeting a week later — attended by 500 people — a proposal to turn the town into a sustainable, tornado-safe paragon of clean energy caught fire.

As part of a DOE rebuilding team, NREL scientists, including Shanti Pless, came to town to advise on energy efficiency and the prospects for wind energy. Residents said yes to the grand vision, even though it meant months-long delays in getting back into permanent housing in the town.

At a meeting with town leaders and Energy Execs, Daniel Wallach, executive director of the nonprofit Greensburg GreenTown, said: "After this disaster, it would have been easy to say 'let's fold this whole town up.' But if we were going to survive and be a player and bring business here, we had to do this."

"Our ancestors were the original recyclers," Greensburg Mayor Bob Dixson said. "They farmed, they ranched, they didn't waste. It was so much in their nature, and it's so much common sense. Why import energy when we have abundant solar and wind resources?"

Today, Greensburg has nine LEED Platinum buildings, including the K-12 school, the city hall, the county hospital, and the biggest employer in town, the John Deere dealership. Each uses half or less of the energy of a standard building of its type. The Deere building employs skylights and natural daylight, captures and recycles water, uses geothermal heating, and draws power from its own wind turbine.

"It takes a lot of courage, when you've lost everything you had, to not just want to get back to a sense of normalcy, but to wait and do it right," Greensburg City Administrator Ed Truelove said. 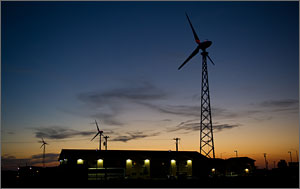 Wind turbines power the Best Western Hotel in Greensburg, Kansas. Greensburg rebuilt after a devastating 2007 tornado and now has nine LEED Platinum buildings, each using half or less of the energy of standard building of its type. The LEED Platinum buildings include the K-12 school, the city hall, the county hospital, and the biggest employer in town, the John Deere dealership.
Credit: Dennis Schroeder

On the ride back to Denver, the Energy Execs reflected on what they had learned and how they can bring clean energy to their workplaces.

Raimone Roberts, an executive with a large construction company, wants to help rebuild inner-city Detroit, one energy-efficient block at a time. "I learned that simple systems can work very well, and that you need to be very clear about the vision, about showing how the project reflects community values," Roberts said. "They inspired me to not be afraid to ask questions, no matter how ludicrous, because if you ask enough questions you come up with innovations that can lead to great change."

Manisha Patel, deputy assistant director for regulatory policy at the White House Council on Environmental Quality, said: "We no longer have to change the way people think about renewable energy. The mental change has happened. What isn't there is an infrastructure that will allow renewables to truly penetrate into our delivery system around the country."

"I was awestruck by the human ingenuity and the perseverance of the human spirit, how driven people can be," Patel said. "The things I've seen make me personally want to be a better person. I'm going back and sharing these stories. I'm energized, and I want to do things."

Keith Hay of the Colorado Public Utilities Commission said visiting Greensburg convinced him to be more ambitious with his clean energy project. "How do we take energy efficiency from the status quo to deepening it, taking it to the next level? I want to help the commission figure out how we move to more integrated solutions." 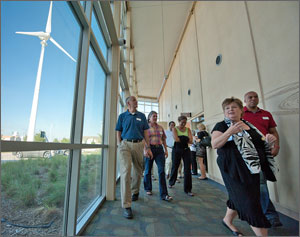 Patrick Hamel of the Colorado Department of Public Health and Environment will redouble his efforts to win approval for a rooftop solar project for the Argo Mine in Idaho Springs, which would cut energy use by 40%. "I saw a sign in the new school that stuck with me" when touring Greensburg's new K-12 school, Hamel said. "'Your beliefs don't make you a better person, but your actions do.'"

Carol Dollard, an energy engineer at Colorado State University (CSU) who wants to build a small wind farm at a CSU cattle research center on the Eastern Plains, was impressed by "the whole green building thing in Greensburg.

"Did I see anything I hadn't seen before? No. But they just got it. They weren't content with one LEED building that could be financed with government help. They have the mentality that you should do it right every time.

Karen Hancock joined the field trip after the theater shootings in her city, Aurora, Colorado. "I had to ask, 'Aren't you just traumatized by what happened to you?'"

Greensburg residents said they did experience trauma, and some are still feeling it, Hancock said. "But they said the rebuilding of the town was a kind of green therapy that took them away from their problems. They were able to make their community better and their personal lives better out of a tragic event."

Dick Hemmingsen, director of renewable energy initiatives at the University of Minnesota, said the can-do spirit of the people in Lamar and Greensburg — and their embrace of conservation — reminded him of his own great-grandparents, who built sod huts with green roofs, using the warmth of the earth to survive.

"It's just another way to get back to the future," Hemmingsen said. "It's an inspiration to see people rolling up their sleeves to get things done that have to be done."

The 19 leaders — two were unable to make the Kansas trip — chosen for the 2012 Executive Energy Leadership Program (Energy Execs) will each present a viable project on a clean energy application at the end of the five-month program.

A companion program, the NREL Executive Energy Leadership Institute, has 17 in its 2012 class. The leadership programs run by NREL focus on delivering clean energy solutions. They give executive decision-makers from throughout the United States an in-depth look at renewable energy and energy efficiency technologies. Briefings by NREL technology experts, research laboratory tours, and visits to field applications are part of the experience.

"The world needs leaders to help transform our current energy system to one that is more sustainable. We are thrilled to welcome and inform our business, community, and government leaders so they can understand the implications of their energy decisions and demonstrate leadership for the long-term clean energy economy," NREL Director Dan Arvizu said.

Since its inception, more than 115 representatives of industry, government, and nonprofit organizations have completed the Energy Execs program, delivered through the Executive Energy Leadership Academy.